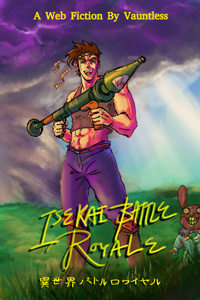 Isekai Battle Royale: I was an MMORPG player transported into an FPS World!

Brent Davies, ordinary teenager, was walking down the street pondering the weird dream he’d had last night. In his dream, he was floating in a vast dark space, with a huge wall of what seemed like tiny action figures displayed before him. If he focused on one it would zoom in for a closer look. Every now and then, one of them would disappear. Apparently there was a 30 second time limit, and he was supposed to select one of them for some reason? He was trying to remember which one he’d picked when...

“Oh no! Watch out for that truck!” someone called.

Brent looked up to see a huge motor vehicle barreling towards him at full speed. It honked loudly but showed no signs of slowing down.

Brent reacted like any normal, rational person would by quickly running the remaining distance across the street to get out of the way. It was not far, and he made it to the curb with a few seconds to spare. He stopped and exhaled in relief.

But then the unthinkable happened: the truck honked again and swerved up right onto the curb toward where Brent now stood in the mistaken belief that he was out of danger. This time there was no avoiding it. “Guess I’ll die,” he said while shrugging, the only thing he could do with the little time he had left in this world.

His last thought before the vehicle hit him was that it looked a lot more like a blue school bus than a truck.

This is my first story on Royal Road. Comments, questions, and other forms of feedback are welcome!

Bio: if only I had thorns like a thistle