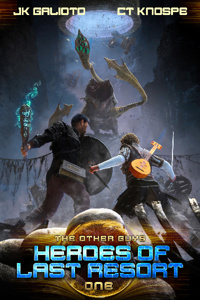 Jack Jensen is a middle-aged nobody who lives a lackluster life in an even more uninteresting town. Having sampled every job the small town of Merrill, Wisconsin has to offer, he has excelled at nothing but growing his beer gut and his luxurious curly, chestnut brown hair. His life is one of unrealized potential and lack of direction.

Things change one morning when his brother, an Army Major, lands his helicopter in the parking lot of Jack’s less-than-profitable gaming store in a desperate bid to thrust the perennial slacker into the role of saving the country, the world, and even more unlikely, himself.

Heroes of Last Resort is now available on Amazon e-book including KU and as of 8/6/2021, paperback!

This is a solid story with good world building it also contains the following things:

A well thought out cast of characters

The secondary characters have their own personalities and serve a purpose

It has a vision of where it's going both in the short term, medium term as well as a long term goal

The protagonist is believable, with a personality that's more then one dimensional

This is an early review I'm sure more will be added to this story but for now I appreciate the author for posting it.

If the above points seem interesting to you give it a try.

Finally a LitRPG book (hopefully series) for us Gen X-ers where the lead isn't a foolish 20 year old.  Really liked the set up on how Jack ends up in the Rigara and acquires his abilities.  Character system is similar to some other LitRPG books but makes sense and seems to hold together without a ton of annoying loose ends.  I like that Jack has a handful of advantages, but isn't stupidly overpowered as the leads in some LitRPG series.

This book really takes off when Gooch joins the fray.  I almost felt like I was reading the LitRPG version of "Stand By Me".  Really a buddy story at its heart. I like that Gooch is given almost as much focus as Jack so that Jack doesn't completely dominate the storyline.  Looking forward to reading more.

I enjoyed the prelude; like the setup of a potential world changing disaster.  Jack seems like a slacker, but a likeable slacker and I want to find out more about him.  Also - cover art  is amazing! Great start - keep it up and please keep posting more of it here.  Let me know if / when you are published.