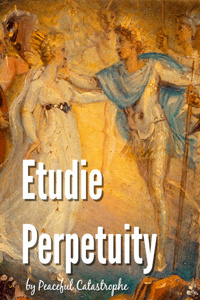 Luckily, nobody noticed Noel’s magic last night. It was morning now, and Noel and I were excited about our findings about magic from the night before. I was also excited by some things I had realized about my translation magic.

I asked Noel if she had used a different word for fire last night, but she said she’d used the same word she’d been using before: the word for blessing. When pressed, she explained that she now thought of my fire as different from the blessings the elves brought back from The Terrible, even though she used the same word for it. I realized this meant my translation magic was able to translate subtle nuances in meaning even if the words being used weren’t changed.

I was also surprised that Noel was able to use the word ‘reason’ after not being able to use it at first, but she said she’d settled on a word in her language that had a similar enough meaning after hearing me describe the word in my language. This told me a little bit more about how my translation magic decided to translate words that didn’t have perfect translations between our languages.

The elves had a light breakfast every morning, usually fruits, nuts or grains they had gathered the night before. They also drank water from springs or rivers after boiling it, although I was sure many of them would still have gotten sick from water-borne diseases if they weren’t elves. They couldn’t have been as long-lived as they were without a tough immune system.

Noel and I were part of the hunting party this time. Sharun was feeling better and would be leading the team, and since Noel and I were beginners, we had to stick close to him. He brought out the Dragon’s Tooth, but after seeing him use it to defeat the Sativus Hog, it was clear Sharun’s skills were more amazing than the weapon.

“A herd of Alata Banes passed by the river in the morning,” said Sharun. “I saw them head towards the sun, so we should go to the river and try to pick up their tracks.”

And so we went to the river. It was a little further away than the other water sources near the camp, but hunters like Sharun preferred going there to check for big game trails or to catch fish. The party had to be careful while crossing the wide open plains, since various monsters would be able to see us from far away.

“We have to be careful on the plains, but you should keep an eye out for easy prey,” continued Sharun. “And if you see tough hunts like Carica Serpents and groups of Sativus Hogs, you should stay far away from them. Most monsters won’t attack a large group of elves like us unprovoked, but you can never be too careful.”

Noel and I each had small flint spears to defend ourselves with, but were told not to use them to attack since we might get in the way. Our task was to stick close, watch, and learn. We would begin by setting traps and catching small animals on our own after getting some experience with the hunting party.

“Are Alata Banes easy to hunt?” I asked.

Sharun nodded. “They only eat plants and travel in large herds that are easy to break up as long as we intimidate them properly. The real danger is in the poisonous clouds that they can shoot out right in front of them. That’s why we try to take them down from a distance and only cut off their roots to eat.”

“Yes, their roots are full of nutrition, and become nice and soft after being blessed. We mash them up with herbs and berries to make them taste even better,” said Noel.

“I see,” I said, questioning my understanding of monsters. Come to think of it, that Sativus Hog had tasted like a vegetable too. Are they all like that?

“This is strange,” said Sharun, his eyes shifting around. “We should have run into something by now.”

“But we’re still far from the river,” I said.

“No, but we’re on the plains,” said Sharun. “We can see long distances and many monsters should be out hunting at this time. Yet, we haven’t seen a single monster yet. It feels quite… odd.”

Now that he mentioned it, I couldn’t hear any birds or other animals either. The only sound was the wind rustling leaves and grass. We were close to the river by now, so we should have run across a monster or two, even if we didn’t want to hunt them.

Nobody questioned Sharun. He was the best hunter in the tribe and if his instincts were telling him something was wrong, nobody wanted to stick around to find out what was happening. The sun had only just cleared the horizon, this was the best time to hunt, and we even knew where a herd of easy prey had been a little while ago, but it was too risky to hunt when all the monsters were staying clear of this area.

Wait. There had been no monsters on our way to the river, even when we had been relatively close to the camp! I looked over at Sharun, and judging by his concerned look, he had come to that conclusion already. We had to hurry!

And so we retraced our steps the best we could. We couldn’t run since that would make it hard to be on the lookout and would sap our stamina in case we had to fight something, but we still walked so briskly I thought I’d burn through my shoes.

By the time we got back to camp, the foraging party had returned as well. The forest had been deathly silent so they decided to grab what they could and rush back. There was still a lot of food in the camp since we’d been preparing for the summer trek to the highlands. The elves went up to the highlands for the summer since it would be too hot and dry down in the plains. But it was a long way to the highlands so the elves stockpiled things like nuts and grains so they didn’t have to waste too much time hunting and foraging. But sometimes they would have to dig into those reserves for emergencies like this one. Still, if things didn’t improve in the next few days, we wouldn’t have enough for the journey to the highlands.

“We might have to ask the other tribes for help,” said Starry.

“But what if they are facing the same issue? Whatever is wrong was effecting at least the entire space between the camp, the river, and the forest. The nearby tribes might be suffering too,” said Sharun.

Starry frowned. He looked at Vell, who nodded. She said: “We’ll have to ask the Oracle.”

“Getting the Oracle involved for something like this,” said one elf.

“If it’s the Oracle, we will be able to find out the cause for sure!” said another.

Vell clapped her hands. “The Oracle’s truths are not always easy to understand. She might not be able to help us find out what’s happening on the plains. But she should be able to guide us.”

Starry nodded. “Yes, we don’t need to know what’s going on, just what we need to do to stay safe. . She can also relay information to other tribes that come to her for help”

I shot a glance at Noel and saw she was smiling like a maniac. Her grin stretched from ear to ear and her eyes were so bright they might as well be sparkling. Just as I was about to ask her what was going on, I felt a hand on my shoulder. Starry and Vell had walked over and were looking at Noel and me.

“As is custom, the newest blessed shall visit the Oracle,” said Starry. “You will have to take your blessings with you, so let me go prepare them. Sharun and the hunting party will escort you to the Oracle’s haunt. Vell,” said Starry as he faced the other elder, “could you teach Caspian how to petition the Oracle? You’ll have to teach him the customs of formality towards elders too, the kid doesn’t know how to be respectful at all.”

Wasn’t that because of my translation magic? I complained to myself.

“I’ll help too,” said Noel, quickly. “I’ll make sure he doesn’t embarrass me—I mean the tribe— in front of the Oracle!”

She was way too passionate about this. Her eyes were stretched wide open as if they wanted to grin like her mouth.

“Right,” said Starry, “I almost forgot how much you wanted to meet the Oracle again.” Starry sighed. “You only saw her for a moment when she came to tell us an important prophecy. How could you have become so obsessed with her that quickly?”

“But she was super cool!” said Noel. “The way she hid her face even though it was night, glided across the ground even though it was rocky, and whispered even though the night was so quiet we could hear her anyway, was all so cool! I’m so glad I’ll get to meet her again, and even talk to her!” Noel looked at the sky. “It’s a dream come true.”

I guess this was what passed as a celebrity crush in this world, I mused.