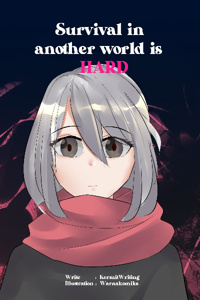 Kurushimi’s shadow intertwined and formed into the katana’s shape. The unstable and dark construct rested in Kurushimi’s hand. Kurushimi had gotten to this stage many times and had failed as many times as she had attempted making it. Not wanting to repeat the previous examples of the shadowy substance exploding everywhere, Kurushimi hurried to infuse her blood into it.

The blood from her open wound had been gradually leaking since she cut it. As mana filled her blood, it started to move towards the black katana. The blood seeped into the katana from various angles, turning the black katana to a more crimson hue. The menacing-looking blade vibrated lightly.

Kurushimi watched the vibrations of the katana. It was more tame than before but was still unstable. It may hold for a good bit longer than a regular ‘Shadow magic’ katana, but it definitely wouldn’t hold as long as she wanted to.

She concentrated mana into the blade, attempting to harden the blood inside and crystallize it. Kurushimi hoped that this would make the blade more stable and solid. Holding her other hand over the katana, she concentrated harder.

Gritting her teeth, she stared intensely at the blade. She was conjuring mana into the blood contained in the blade. But for some reason, it wasn’t working as she had intended. Kurushimi was confused by this development. She was doing what she had always done…

Kurushimi wiped sweat off her forehead. The whole process had surprisingly drained her a lot. Standing up and grasping the katana by its hilt, Kurushimi took a deep breath. She slowly lifted the katana towards the light, getting a better look at it.

The edge of the blade was comparably sharper than its ‘Shadow magic’ counterparts. The blade was strong and beautiful, but wasn’t heavy. Although, since the hilt was made of the same material as the blade, Kurushimi found it a little uncomfortable to hold.

Kurushimi swung the katana down, stopping and holding it perpendicular to her body. The katana threateningly pointed outwards at no one in particular. Kurushimi smiled as she admired her craftsmanship.

《An item has been created!》

《What will you name your new item?》

Voice-san called out to Kurushimi. Kurushimi didn’t answer at first, causing Voice-san to slightly raise her usually monotone voice. Kurushimi snapped back to reality to look at the system messages.

Finally taking notice of the system messages, she observed their contents. Apparently, the system had officially recognized Kurushimi’s creation of her sword. Kurushimi pondered over what she should call her new sword.

With closed eyes, Kurushimi held her chin. After a second, her eyes snapped open and her hand waved forward. Her pointer finger pointing outwards towards the system messages, she proclaimed ‘Sword 1’ to be the name of her new sword.

Voice-san furrowed her non-existent brows. Kurushimi had named her new sword, which she was evidently proud of, ‘Sword 1’. Voice-san found Kurushimi to be a strange character but she couldn’t understand Kurushimi’s thought process here. Wouldn’t you at least want to call it something cool?

“Well it’s the first sword I’ve made. I’m probably going to make more, so I’d like to see the progression in quality. My swords and creations will get better in the future so I’m making sure I know that this was my first try at making a sword!”

“Even so, there has to be something better to call it. Sword 1 just sounds dumb.”

“Shut up! It’s not like anyone other than me is gonna get this sword… And no one is even here to look at the name anyway!”

Kurushimi held the katana up again, looking at it with her brows furrowed. Kurushimi felt that it was convenient to have such a naming scheme. And she was fine with it! While Kurushimi was looking at ‘Sword 1’, a prompt appeared next to it.

Desc: A sword made from the mixture of shadows and the craftsman’s own blood. Made by a newbie craftsman, the sword is based on the ‘Japanese katana’. Being the craftsman’s first ever creation, the craftsman chose to give it the awful name ‘Sword 1’. If the sword were alive, it would surely feel resentment for its creator.

“Oh, I can see the Sword 1’s stats! But I didn’t use appraisal? I wonder if that’s a creator privilege to see the stats or everyone can see them…”

Kurushimi went over her sword's stats. Mostly everything was stuff she either already knew or couldn’t really do much with the information. She was a little disappointed after seeing the sword had no special effect. Beyond that, after reading it, Kurushimi chose to ignore the description.

“Alright, let’s test it then!”

Dropping the blade by her side, the prompt disappeared. Kurushimi looked around herself for the nearest tree. Walking up to it, she observed the trunk. It was relatively thin but the tree was tall. Its bark had a dark shade, as did all the other trees she had encountered in the forest so far. Kurushimi felt that if it wasn’t for the bright and illuminating crystals that seemed to form around a lot of the trees, the forest would look incredibly gloomy.

Her sword behind her, Kurushimi leaned into the tree and felt its bark. The texture was rough and coarse. Pulling her hand back a bit, she then suddenly accelerated and hit the tree with a knocking motion. Leaving a dent behind, it was clear her strength stat had made her fairly strong.

“Honestly, I’m not sure if I can really tell anything from doing that… Let’s just use Sword 1 now.”

Kurushimi stepped back about a metre away from the tree. Readying her sword, she prepared to swing it at the tree.

Kurushimi realised this would be the first time she ever swung a sword in real life. In modern society, there aren’t really many occasions where you would use a sword, other than in sport that is. And that was for the better. Though sadly, Kurushimi was now in a world dangerous enough to need a sword for protection.

Pushing away her idle thoughts, Kurushimi shouted with her best impression of the kendo club members from her school. The sound of the air being ripped apart by the blade was quickly followed by the sound of wood being sliced. The blade went cleanly through the trunk.

Kurushimi hurriedly jumped away from the falling tree. The tree was tall and heavy. Kurushimi wouldn’t be surprised if the thing were to squish her flat. Not wanting to die in such a stupid way, she scurried out of its landing zone.

“Am I just strong or is ‘Sword 1’ really good...? Well I guess trees cant gain the endurance stat like I can.”

Kurushimi scratched her head and once again looked at the fallen trunk. Foliage and plant-life alike had been destroyed in the impact. She felt a little sorry for the damage.