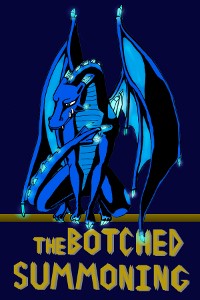 People know of the Summoning Ritual: it brings the greatest of heroes in a new world to defeat the evil at the horizon! High and mighty adventurers, guardians of light, here to defend the oppressed humanity from their despicable foes. But what if the plea, the 'desperate' call for help, was met with contempt and disdain ? What would happen if the ritual fails? What horrid things could come out of a botched ritual? A man can personify the most feared beast known of man while being the sole hope of the kingdom. Emotions can cloud even gods judgement. Balance of power if a fragile thing, oaths and scorn can disturb it easily. This is the story of Fafnir as he has to survive his new life. But things are not always as they appear." i want to thank mejinzs for his gift of cover art, and both rouge and mejinzs for the proofreading support and rouge for the help with the abstract R15+ for violence... i guess and possible strong language... i guess (doing this as a better safe than sorry sort of deal.) now posting on my blogspot site as well (https://talesoftheforgottenslayer.wordpress.com/)

Story is pretty average given RR standards. Guy gets transported to a fantasy world through a botched summoning and arrives as a super powerful dragon instead. He uses this power to crush a bunch of people and eventually even kidnap some family members. A lot of the actions and plot developments, however, lack logic and that is this story's main weakness.

1. Fafnir seems to have a large personality change that is largely unexplained at the beginning of the story. Pre-summoning, he seems to be a reasonable but all around very average person. After rebirth, he comes across as arrogant, petulant, and needlessly homicidal. There are some hints that it's caused by his dragon instincts but in the end, this huge shift isn't really explained.

2. People around Fafnir seem way, way too accepting of his circumstances. This problem is most blatant when he makes it back to his original world and his brother/mom, after fainting at the beginning, just seems to accept everything as true with "oh ok" kind of attitude.

3. The ongoing trope of people underestimating Fafnir because they mistake him for a wyvern is getting old really fast. It's the exact same progression each time. They meet him, insult him because they think he's a dumb beast, and he does something violent. Almost every new character who meets him goes through this exact process.

4. Fafnir's random temper tantrums make little sense. Part of the problem is the massive personality change at the beginning. The other part is that it's just plain unlikeable. Sure, some of the people he crushes deserved it but the others more or less get punished over a misunderstanding. His "do this in 5 minutes or I kill you" routine is both unfunny and juvenile.

5. 46 chapters in and the plot still has no direction. Is there an end goal somewhere? Fafnir has built a lair and kidnapped himself a daughter but the plot doesn't seem to be moving forward in any clear direction. There's no obvious antagonist or even obvious goal. So far I just feel as if I'm reading about a guy playing aimlessly in his sandbox.

I have to say that your style changed quite a bit with the chapters. But something stayed the same along your story, you are a schemer, you planned many things and we can feel it.
A minute detail in a paragraph could be a hint toward a future development , I guess that you love to betray (or not?) the expectations of your readers.

About your characters (and the story):

I don't really know what are the goals of Fafnir because you are telling a story in which you care about what you reveal to your public. Fafnir is clever, he planned many things that you hid, is a bit short tempered. His behaviour is clearly evolving since the beginning. He seems to mature as the same time as his 'form' grow up.

It is sometimes a bit difficult to remember that his body is not as old as his mind thus producing... unexpected reactions.That is a part about which you don't make many references about even if it seems to impact on your character.

You are limiting what we know by redirecting our attention on your characters emotions or showing how they interact via their discussions. But even if it is a good way to keep yourself from revealing too much, it might be good to let us know or see a bit more. Changes of point of view solve this but... Well, dialogues. You visibly like to show interactions through dialogues, and you are not fond of the more descriptive part of the work. It produce very funny conversations, cynical answers and many molten pieces of furniture and people. But some may say that it lack a more in depth view in the characters, we never really dwell in their thoughts.

If I try to be accurate, it makes me sometimes feel like I'm watching a play, not reading a novel. It is still very entertaining, don't be afraid, and interesting. I still want to know what will happen next !

But using all the tools that a book offers might help you on the long run.
And if you don't agree, then lets say that it's your own style and you want it to be as far as possible as it can be from Tolkien-esque lengthy descriptions. And I can't deny you the right to have preferences.
A random guess would be that we are still mainly in the part in which you are setting up the world and you are positioning your pawns, preferring to focus on how they interacts rather than describing the world you imagine.

Some may argue that it let us free to imagine, other may say that they can't see what it looks like for you. Your choices have the inconvenient of their advantages.

The scenes we are witnessing have weak transitions because of that. It is great to be able to sum up an idea in a few words, but it oblige your reader to be always careful of what (s)he reads. We can't skip a few words or suffer from a lack of attention for a few seconds because we can suddenly be projected onto the next scene without being able to recall when it happened. You improved on that point in you late chapters but it was visible at some point.

Your re-writing work of some part of your published chapters is good initiative considering what I said.

I wrote this review more like an extensive opinion in order to help you rather than as an opinion to help other readers.

The style is easy to go with;
The characters are moody, cranky, playful, calculative and if you like to see them talk together, then heads on !
The story is still progressing at a good pace, and will certainly be a multi level one with primary objectives and meta-plots appearing.
Beware, risks of burning, melting, tricking, turning into snacks and unexplainable disappearance among others. Yeah, dragons.

good story and i am loving this so far hope you have some great plans for this story :)

I personally hope to see you continue this until the end and i will probably stick around until then if the quality doesn't drop way down. I am courious to see what the main characters goals are and if he will help the humans or not.

He seems to be a carefree guy who relaxes and just does something when he can gain something himself. And if you're wondering why i lowered the grammar score it's because if i put it on 4 or 5 stars i expect it to be almost flawless. Of course i am not a master at english since it's not my first language and all.

anyways what i am getting at is i will stay around and enjoy the show and hopefully by the end you will have come up with a great story and everyone will love it.

Keep this up. Please.

The story is good so far but i left me wanting even more so please keep writing this until the end. everyone needs a good dragon story.

Reviewed at: Chapter 6 – calming a dragon

Not a bad base and setting, but it needs a lot of work. There are numerous unaddressed errors, especially spelling errors, and the story has a generally frustrating flow. The characters are quite shallow too, with little explanation of their motivation or thought process, and it doesnt help what what is shown often makes no sense within context.

The premise of this story is intriguing but it is hugely let down by poor style and grammar.

This is pretty nice

I haven't seen many Dragon FF, but this one clearly strikes me as one of the best i have read on this site, and with a nice spin on the story, the characters and the setting. If you like dragons, then this could very well, be another FF to follow. :)

I love the story so far. The development of the story is great, but the idea of goal in Fafnir is shallow. Style is exceptional but could use some stronger words in places, and replace strong verb where they are not needed. Characters are a bit iffy so watch out for them. I want to see them grow, not exponentially but some one to be able to bond with to feel pained at their death or leaving.

Reviewed at: Chapter 6 – calming a dragon

The plot is fascinating, there is no way of denying it. However, it lacks simple logic. The MC take ridiculous decisions just for plot sakes and it is a serious turn off in the story, not to mention the poor grammar.

love the series but hurts that it’s been 2 years since the last one, probably shouldn’t read unless your ok with an unfinished story, other than that the story itself is great, albeit quite abstract with it’s  jumping around and plot holes. If given enough love this would be a great light novel/ manga/ anime(much better than the shit being put out as of late)