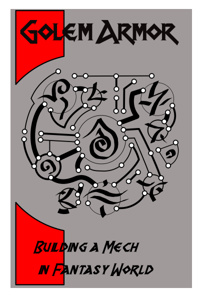 He died of old age, surrounded by not people but machines built by his own hands. Join him as he reawakens in a fantasy world, once again, trying his best to reach his dream.

A different person molded by his new surrounding, Adrin had to adapt to survive. The journey towards it would be slow as he had to start from the bottom and build everything from scratch. He had to adapt to using unfamiliar tools to recreate the things he had built, or using science to get ahead.

The world, however, wouldn’t open a path for him to travel. Monsters big and small, people kind and cruel would stand in his way whether he liked it or not.

Author’s note:
English is not my first language.
For young adults (light adult content, not romance focused).
A remake/revamp of an original story.
It will take a while before pieces are put together.

I'm giving it 3 Stars, cause it made me laugh while im feeling down from being ill a bit.

But generally the grammar is really terrible at somepoints.

And a story is kinda sparesly build around one main topic.

And well the story is mostly:

How the *self insert* MC has lots of sex and gets all the 17 year old girls he wants (+ some mature ladys and probably that loli baba busty half-elf one, sooner then later probably other races too and maybe even a princess ? xD).

I dunno if i should continue to read it or wipe my memory banks.

So i will just see where this is going and drop it after chapter 30, if there's still only sexy time going on and nothing else.

I hope this was just the setup for the whole thing till now xD. Atleast he got no super powers, except alot of easy to influence young ladys.

If you're a harem lover or can look past it, its enjoyable. ^^

Still waiting for the golem armor and epic fights. Dungeon, oh dungeon. Were thus at. My hearth bekons they. Smash and loot, all those monsters. Oh dungeon!

Only thing that irks me alot atm is the obession on "blue flames" of that miss xD...

If she ever used air + fire magics. She should have found those by accident till now. But well, i guess story plot? Atleast its a plot ^^. And i'm kinda wondering, how hes gonna create plasma. Or is he gonna fake flame colors to green with some metal scraps xD.

Story has a interesting foundation and the magic system is one of the more interesting and inventive I've encountered, but the MC would benefit from a bit more development in the first story arc. The first few chapters were promising in terms of character development but it feels like it got sidetracked by the love interest.

Grammar is a bit rough in places but generaly readable and improves in later chapters, the first few chapters would benefit from improving the grammar there as they are the worst offenders in that department. A tool like Grammarly (the free version) would probably catch the worst of it.

The first story arc feels a bit short to me and could be used to flesh out the MC and main side characters a bit more and add a bit more world-building if it was a little longer. Other than that it's a solid arc that sets up the MC and the other characters fairly well. I would have liked to have seen more of the conflict between the MC and first arc antagonist and to dilute the harem aspect, that gets a little too much of the focus as is compared to the protagonist/antagonist conflict even if it is a facet of the conflict, and is definitely the main area in the first arc that could use improvment. As it is the antagonist is more of a background character mentioned in passing than anything else.

Not really going to comment too much on the writing style as that tends to vary quite a bit from author to author. That said the writing style here, while different from what I'm used to, dosn't drive me away from the story.

I'll probably come back and edit this review at some point as the story progresses, probably around chapter 40 or so, and as the author (ideally) improves their writing skills.

I really like the general idea, the title was magnificent and the creative implementation of physics into the magic system was cool it really just suffered from one major issue. It is too sexual. Everything seems to revolve around sex, he's thrust into a matriarchal society and immediately has people bending over backwards for him. Its kinda weird not gonna lie. If not for all of the sexual themes I might have continued but every other chapter is either him sleeping with another woman or saying that he's such a different giga-chad because he doesnt pounce on anything with legs.

Good story but the MC does not carry it well

The idea of the story is not bad, the problem is that the MC has no defined personality.

He just does what the voice in his head tells him to do, wins and plows women that literally come knoking at his door. He succeeds at everithing the fist timenhebdoes it, sometimes by pure chance.

In ten chapters whe still have not seen the slightest interes in anything that is not getting stronger or plowing, he is suposed to be resourceful and inteligent to make a mecha but I have seen none of this.

This story needs to give MC a motivation to do things that are not surviving if it wants to be read.

Simply put, the description suggests an entirely different story to the one we got. The old man isn't the mc, it's actually a kid who is native to the new world. The old man is a version of the kid from a past life who's memory is sequestered away in Adrin's soul or something.

But the story clearly isn't from an old man's perspective, and the character going through arcs isn't the old man either. The spirit (The person you said was the mc) is actually very vague in the story, popping up to give information and disappearing so the mc can go do stuff. He doesn't qualify as a side/mentor character, HOW IS THIS THE PERSON YOU DESCRIBED THE STORY WITH?!!

If anybody is interested in an actual description of this story, then... I can't really help you out. I havn't read enough and don't know where the story is going to give a good one. But I suspect it would start with-

"Follow the adventures of a young boy whose life diverged from the sad and hopeless existence it would've been if not for a curious spirit obtained during his awakening. Adrin doesn't know where this spirit came from, but it helps him understand more about the world while he struggles to build the strange machines it showed him."

... See how I at least gave an accurate impression of who the main character is? It's the kid, clearly. Read this story if you want the kid, not the spirit who so far hasn't been given his own POV or even any of his own lines. I find this to be the biggest problem by far, not the fact that the story is more concerned with s*x than mechs. It's a more fundemental problem.

Way too much plot convinience

The whole story idea is good, but it is at times unclear.

BUT what is completely unbearable is the whole sleeping around the mc does, it is as if all the women in the whole world want to sleep with the mc, and it is so jarring.

So my reccomendation is to not read this glorified smut.

Pretty good story soo far
The world is pretty interesting , with an underlying system layer, that alot of ppl dont seem to know about.
With an interesting soul splitting concept.
small grammartical errors, but very much readable.

The title gives off a cheap LN/WN vibe but dont be decieved, there's actual world building in this novel. Keep up the good work author

while some parts of the story aren't that clear it's awesome overall. The story has decent world building however I like the magic system the most so far. Another thing I noticed is you never really gave anything concrete about his past life which is slightly irritating ,but overall this is a good story.

Awesome despite the Misnamed Title

When I started reading, I didn't know what to expect.  A villager undergoes a special/gruelsome ritual to awaken his spiritual guide, and it helps him to unlock a system of progression.  It takes a while to understand the village's oddities, but the MC slowly increases his power and eventually leaves the village -- to discover a whole new world of magi nobles and his OP magic powers.

Notice that I haven't mentioned anything about armor or golem.  It feels odd to see them in the story title, while the story has no obvious relationship with either element.  There is some sex, but they are mainly fade-to-black rather than explicit in nature.  More like a R rating at the movie theater than X rated.  But your mileage may vary.

Interesting idea, I like the general premise. The characterisation could be better but is strong enough.
The grammar is decent but with some minor mistakes.
There are sentences that just don't make sense though and at some points there are extremely abrupt transitions that felt very jarring.
I don't really get the differences between skills and passives?
Why does it take them an overnight journey to get from the village to the town but Hanna can fetch Emilia by lunchtime? If she can really go that quickly why doesn't the MC remark on it?
What was that about the MC wanting to go into the dungeon?
'Lavisous' seemingly changed from making the user appealing and good in bed to making them walking date rape over the course of a couple of chapters?
You seem to have made a point that the MC had a lot of experience in his previous life but then seem to be oblivious to people being attracted to him?
Anyway thanks for the story and I'm sure if you give it a proper go over you can make something amazing. Good luck