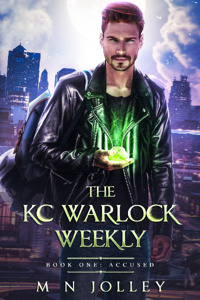 My name is Levi. I’m a journalist, I’m autistic, I’m bad at magic, and I swear I didn’t kill her.

Research for the paper usually falls into a few basic patterns. Someone in the city says there’s a troll under Buck O'Neil Bridge, or they’ll call just so a friendly ear will listen to them complain about a pixie infestation.

That sort of content carries me through slow news weeks. It’s rare that I uncover a murder.

Being framed for murder, though? That’s a first.

With the Wizard’s Council hunting me for a crime I didn’t commit, I’ve got no choice but to solve the murder and clear my name. If I don’t unravel this case, nobody will, and I’ll go down for it so hard I might never see the light of day again.

It's hard to find a good murder mystery on RR, but there's at least one.

Accused isn't a particularly long novel, only about 64K words, but it packs a lot of excitement into that amount of space: murder, conspiracy, magical police, supernatural creatures. The main character wins through not on strength or charisma, but by observation, persistence, and a bit of cleverness - even against opponents with a high degree of both power and authority.

Style
First-person is usually not my favourite, but it would have been impossible to tell this story in third-person. The style is smooth, informal, and very readable. It feels very well-suited to the story being told.

Story
Who killed the victim? When the murderer is finally revealed, it makes perfect sense, without being obvious in advance. The struggles Levi goes through to clear his name are difficult, but he finds solutions that are plausible and outside the box.

Grammar
I'm fussy about this. While I can't guarantee that there wasn't a single typo anywhere, I have no recollection of anything specific, so it must have been so uncommon that I ignored it and kept going.

Character
The best bit of this novel. Levi is wonderfully human. Overpowered characters bore me. Levi has determination and a knack for putting the resources he has available to the best use. He notices things others don't, refuses to accept dirty compromises, and successfully navigates the world's magical dimension despite not being born to it. I consider this work to include a brilliant double bonus. Accused includes a first date with another man, with absolutely no fuss made about that. Levi is autistic, and that is also simply there, something that is sometimes inconvenient but may well be a factor in his tendency to be observant and tenacious.

If you want a good, fast-paced magical mystery, start this one. It's not only better quality than most of what I've seen on RR, it's better than some published books I've read.

This is a high quality fiction, head and shoulders above most of what we can find on this site. there are a few weak points, but they are very easily rectifiable in a second draft. I highly recommand it.

The characters are fleshed out, even if some would need a little more work, and the depiction of autism is very well done, and most importantly not overdone.

the plot is tightly woven, though I'm sure a few holes could be punched into the fabric, as it is very often the case with these sorts of fictions.

and there is genuine care and an inventive mind behind this novel. I highly recommand it

I normally write a review after I read all of the chapters (or decide to stop reading). This story is good enough that I don't need to go that far. If you like murder mysteries, you will like this story.

This is not a traditional RR power creep Mary Sue story, so go somewhere else if you are looking for one of those.