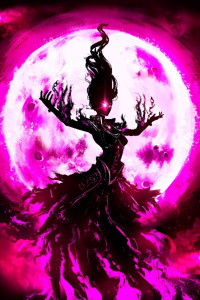 Remove Ads
Previous Chapter
Next Chapter
A note from Dragonsunxx

Good morning people! I hope the week wasn't too rough on everyone! Loving the feedback btw. I greatly enjoy reading the convos in the comments. Keep it up! I'll throw up an extra chapter if we can get to thirty comments! They can be anything from thanks for the chapter to actual questions! If the goal is reached, I'll upload the chapter tomorrow

I glared at the man staring at me from the ledge on the mountain. I wouldn’t have even noticed him had his hair not glinted in the sunlight. The fact that he didn’t seem to notice that I noticed him was even more annoying as he stared at my body. My monsters didn’t care, but this man was apparently very taken with my form.

He finally seemed to realize that I could see him. My annoyance at him and the blaring sun peaked. I snapped my fingers and created four pillars made from Demon Brick. I placed mana stones at the tips inscribed with Prism and blackened out the area. I also used three hundred mana to summon a few dozen Worgs to go terrorize the forest.

The landslide had been a nice as I absorbed all the debris that fell into the entrance, I had blasted open. The purpose of this opening was to attract attention thus I had wanted it to be very loud and noticeable. The strange elf had obviously been interested in the noise, and whoever he worked for or with would now know something was here.

Walking back into the dungeon, I placed a multitude of traps along the passage. In the future, I would remodel this section to continue the spiral that I was creating from the center of the dungeon. I eventually made it back to the natural cave intersection. My vampire spawner had increased the number of normal vampires by twenty by this point.

A steady stream of mana was coming from outside of the dungeon. My wolves were killing anything they came across it would seem. Roland and the others hadn’t killed too much outside the dungeon so I had never noticed the uptick in mana before. Nonetheless, I was more than pleased by the fact that my dungeon’s experience and mana would go up.

The rest of the day passed quickly for me. Working on the dungeon, summoning monsters, getting Roland and his group equipped with steel weapons and some minor armor. I found an interesting skill out as well. I had enchanted Roland’s weapon with my Death ability. There was no telling what the true power of it was until he tested it, but anything to give him an edge for tonight’s raid.

“Losa,” I purred as I checked on my imp again. He still hadn’t awakened. I was really starting to fear the worst. I shook my head. Getting depressed wouldn’t help him.

I was going to summon another Greater Vampire, but changed my mind as I looked over my imp. I had Greater Demon summoning that I needed to test out. Someone once said not to put all your eggs in a single basket. I sat back in my throne and started the summoning. A black magic circle soon took up most of the space in front of me.

It was soon clear why. Much like the Demon summoning, I had a tremendous amount of freedom to design the demon that I would be calling forth. Even more so than the Greater vampire summoning which was limited to humanoids. I played with everything for a long time until what I had was a creature straight out of a horror game.

A giant beast that was partially rotting filled the core room. It was so large, that it had to crouch to fit. Bloody saliva dripped from its mouth. Its fur was coarse and rough. The upper half of its head was more bone that skin. Evil almost rolled from him in waves. Varroth, the devourer.

I stood up and walked over to the beast. I had painted a few creatures like this before on commission. He was almost a masterpiece in my eyes. I reached up and ran my hand through the coarse fur of his muzzle. “You look hungry.” He huffed as it to agree. “There are lots of little green meals running around on the surface. Go with Roland sweetie. Eat your fill.”

The beast twisted unnaturally as it rushed down the passage. Horrifying bone crunching and flesh ripping sounds came from him, but I knew he wasn’t hurt. “My queen. We shall take our leave as well,” Roland said with a bow. He took most of the other Greaters and thirty-nine regular vampires with him. Only Harvey stayed behind to defend the dungeon from any surprise attacks.

I returned to my seat and pulled up my status. Thanks to the goblins that Roland returned with, I had gained a few personal levels. I gained the option to learn a new spell when I had hit level five. I was interested in seeing what options there were.

The list was long. I could only fathom what some of the spells did. That was generally the case when you only had between one and three words to go one. Looking the list over made me miss Losa even more. I sighed then closed my eyes before picking one at random. Opening my eyes, I saw that I had clicked on Death Sight. The spell formula filled my mind as soon as I lifted my finger.

I quickly used the spell to see what it was all about. The world took a black and white appearance. Strands of light were moving around me. I found that I could move my vision easily enough. I followed one of the strands of light to find it was coming from one of the vampires working in another room. Lifeforce? Mana? I didn’t have enough information.

Moving on, I was soon outside on the surface. The wide open space made the black and white world hard to make out shapes. The forest seemed to blur everything together. Looking to the left, I found a wall of light that towered into the sky. I couldn’t see a thing past it. That was the direction the holy aura had come from.

Turning my gaze to the right, I found black plumes rising into the sky one after another. I watched for a while and found that they would split and some of the dark strand would find its way to me. It was interesting, but I wasn’t quite sure how to use this information. I was confident I was seeing the death of monsters caused by my boys. I tried to check it out but slammed against the barrier of my aura. I growled in annoyance.

I watched the scene for a while. I had lost count of the number of strands to enter my dungeon. Mainly because I wasn’t really keeping track. I watched a strand enter my dungeon just before I felt a familiar surge inside. My aura surged outward but stopped after only a few dozen meters on the surface. Inside the mountain, I was suddenly aware of many souls just outside my reach.

I flew back inside and wandered down the tunnels. While my aura hadn’t spread much on the surface, I had gained a lot of ground down here. Dozens of tunnels were now in my grasp and I could sense the goblin outpost just out of reach. I would have to praise Roland and the others when they returned.

Pulling back my sight, I returned to my body. The sight spell would make checking my dungeon over much easier. I stretched and laid back in my chair. I was still waiting for my dress, but I was still not that bothered in my current attire. It was too bad I couldn’t absorb and just recreate the clothes my Greaters were created with, but they were made from mana and just gave me a few points of the energy in return rather than the material they were made from.

The only thing for me to do was to wait for my boys’ return. I yawned while staring at the ceiling. I didn’t like waiting.

Dawn was fast approaching when Roland and the others returned from their raid. I had an excellent pile of mana stones in my vault. I had risen a dungeon level. Delightful results in my opinion. I had created a large room near the entrance for Varroth when I got really bored. He could move around the dungeon, but it was rather sickening to listen to.

I wasn’t surprised that only about half of the normal vampires returned. No doubt there were plenty of powerful goblins in the village. Roland and the other Greaters had received some injuries, but had already consumed blood to recover the wounds. They had even brought me home a present. Three Captains and an even larger brute.

“My queen. The raid was successful! We hit them hard where they least expected it,” Roland reported as he kneeled in front of me. I moved forward and placed my hand on his head as I ran my hand through his hair.

“Well done. I am glad to see you all have returned to me.” I walked among the Greaters and then my normal vampires and touched them one by one. They were loyal to me. I needed to show them some love. Finally, I came to Varroth at the back of the ground. Most likely due to his size, but he was covered in wounds. “Did you feast?” I asked petting his snout.

He nuzzled his head against my hand. “Varroth was a great asset, my queen. The enemy ran in fear from him more often than not.”

“That is good to hear.” I pointed to the side of the entrance hall that we stood in. “I’ve prepared a room for you to rest in. There will be more for you to devour soon.” The beast walked over and crashed down to the ground heavily. I wasn’t too worried about his injuries. Some of them were healing fast enough to be seen by the eye. I rubbed my hands together as I turned toward the goblins. “Now then, I’m a little hungry myself.”

Check out my Patreon to support the story or to read some of my other stories!