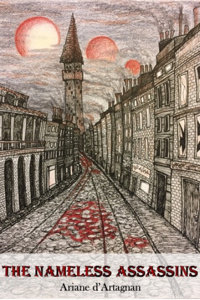 Slinking through the seedy underbelly of haunted, crime-ridden Doskvol, young Isha Yara juggles allegiances to two rival gangs while trying desperately to escape her family.  Meanwhile, the part-demon Ashlyn Slane longs to rise in the cult of That Which Hungers.  And as for Faith Karstas, she is bored.  So, so bored.

When Ash discovers that a gang leader needs help removing an enemy, he immediately recruits Isha and Faith.  Together, the three form a crew of nameless assassins.... (A Blades in the Dark RPG adventure)

Submerge yourself in darkness.

What a lovely immersion in a world somewhere between dishonored and the city of stairs. The setting of a late industrial revolution city with magic and gods and demons. Not quite grim dark but really toeing the line. The story is all about the characters. Very richly written and depicted. I feel like I know them not that I would like to know them. I really appreciate that despite not being really likeable, them being assasins and good at what they do they are very interesting. Very fascinating story. I like the similarities between the countries of real earth and this world. Perhaps it is a parallel universe that evolved in ways similar to our own. I like the real tangible gods one can speak to. I like the way technology is casually mentioned as if commonplace. For example hunting of leviathans which definitely makes me think of dishonored bur it's not oil that matters here but blood. Which is certainly different from the whale punk we known. I also appreciate the lack of steam and airships that trope got beaten to death long ago. The only minor complaint is that the overarching plot seems to be a very slow burn. But some stories are like that and that's ok. I'm looking forward to seeing more of the story.