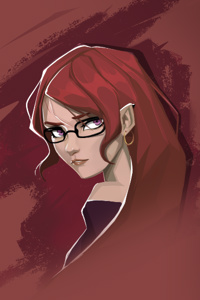 The Unified States of Mana

My name is Kyra Baker, I’m 20 years old and a university student, and recently I’ve been offered a scholarship to a definitely-not-shady magical academy. A ‘support device’ I was given shows me a list of classes I can take, all involving mana, magic, and Skills with a capital S.

To get there I was lumped into a ship full of strange and alien creatures, jumping between worlds as we pick up more and more hapless ‘students’. Things were starting to make a little sense, until the ship crashed into an alien world.

Now, I might be getting trained as a rebel soldier, or something?

Looking on the bright side, I haven’t gotten this much exercise in a long time and there are plenty of cute girls around. When I develop some Skills and work on my classes, maybe I’ll become strong enough to actually have the time to flirt with them.

~ One of the few surviving records thought to be written by the Empress before her rise to power.

Reviewed at: Chapter 14 ~ Fight and Flight

This is a difficult story to write a review for.  I don't like it, but articulating the reasons is a bit difficult.

At the core, it's a scifi-fantasy blend where a prospective...let's say wizard...gets forcibly enrolled from Earth into a magic academy, but, before she even arrives there, is subsequently abducted by the equivalent of guerilla rebels and thrown into their hellish boot camp.

Genre-wise, it's probably closest in tone to so-called Earth system apocalypse stories where a human in a really shitty situation but with sudden access to a System finds an OP cheat.  And if you like those stories then maybe you could enjoy this as an "okay" story.

But if you don't, here, in no particular order, are some of the issues with the story that make me hesistant to recommend it to a broader audience.

1) The pacing is breathless.  There is no breather and through a dozen chapters, it's just a constant fight-or-flight response.

2) The worldbuilding is iffy.  There's some tiny hints to stuff outside the immediate sphere of the action, but there's so little given that it's just a bunch of disconnected factoids.

3) The protagonist's character is a bit iffy.  It seems to undergo a rapid shift in the first few chapters (even before the boot camp breaks her personality).  Additionally, she seems to frequently act "out of character", i.e., inconsistent with her personality.  This largely seems to be to either drive the dialogue or plot forward because the author wrote themselves into a corner.

4) The plot is iffy.  Kind of tied in with the worldbuilding, it seems that things just happen and we don't get a good sense of why they are happening or the motivations of the actors.

5) Romance.  We don't have any romance per se yet, but there's a decent amount of discussion/introspection on the issue.  But it doesn't seem to fit with the rest of the story and everytime it comes up it seems out of place / bolted on.

Reviewed at: Chapter 14 ~ Fight and Flight

Well, not really, but Kyra will sure need grit if she wants to survive.

The summary actually sums up everything that happened up to this point pretty well: snarky girl meets alien that offers a mandatory scolarship to some magic university in another world, ship's crashed, and now she has to fight for survival in something approaching a boot camp amongst local apocalypse-survivors who'd probably be happier with her dead. Well, at least there are cuties around.

Let's get into the details of the score. I'm pretty bad at stating the positive things, so as a disclaimer, this story is GOOD, but not perfect. Here's why.

The style is really smooth and pleasant, the English is almost flawless (only spotted 2 typos).

The characters didn't strike me as particularly original, the more memorable being Kyra herself, Red, Nel and Vii. They don't have much depth yet, maybe that'll change. We'll need more chapters for that. I do hope that Kyra proves to be more than a ball of fear immunity, snark and "I want to be the Empress, rawr". Other than that, they're pretty nice and endearing.

The story feels slightly rushed and a bit imbalanced. For instance (spoiler),

the looong banter in the middle of a fight scene in chapter 9. While a nice attempt at character development, this. is. not. the. time. For eff's sake, allies are being minced into paste around them while monsters parts are raining from the sky, do you really want to share the story of your best flirts? A few lines would be good to lift the tension a bit, but this was too long.

The tension could be managed a bit better, I felt like there wasn't any time to let the pressure down. Tension works best with ups and downs, but it's been a constant rush towards more pressure. It's actually very catchy at first, but the reader also needs time-outs from time to time.

The attack on the settlement for instance was a bit too much, too fast. They haven't settled in, they don't know anything about the settlement or the world... I feel like waiting for a routine to be established would have given much more impact to the attack when the illusion of calm finally shatters. Or when the other students are slaughtered at the end of the attack. We don't have time to care about them.

The magical system is rather original, with elements of cultivation and a sord of system as an implanted assistant. We haven't seen much of it yet. A note though, most of the displays are unnecessary. Perhaps a more compact display could be used (these "Grade 1" get annoying real fast when they're not increasing)? And systematic end-of-chapter reminders omitted?

A small critic is that everything is too easy, so there's no sense of achievement when Kyra succeeds at something. Sure, she needs it, but it feels like in a week only Red might stand a chance against her.

She finds an OP loop-hole in less than 24 hours (dumping her mana then re-absorbing it to increase it by large amounts). Moreover, she never feels threatened. Either she's not targeted at all, or she is healed right away. To fix that, I'd suggest drastically limiting the effectiveness of the loophole, so that it can barely make her more powerful and will require refining her technique to become efficient, and make her injuries have actual consequences. And please, please PLEASE do NOT allow her to zone out during fights. That's a one-way ticket to a gruesome death. Fights are no time to grind.

To sum up, this story is pretty good for RR standard. It's just in its infancy, but it has potential, so if you like snarky heroins and desperate struggles in a world with unknown rules, don't hesitate to give it a try and support the author!

By the way, kudos for the choice of cover, kudos to the artist, and kudos for crediting him (or her) :)