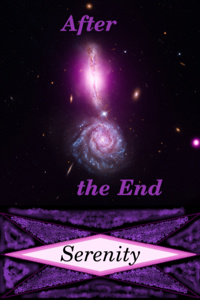 After the End: Serenity

Theoretically, reaching the point where no one could progress was impossible.

Unfortunately, the theory was wrong. Everything reached a point of stasis. Stars still burned and worlds still rotated around them, but no intelligent beings strove to excel - or even to survive.

Except one - and all he did was exist. There was no reason for him to do more.

Eventually, Order’s Voice found a way out. If the only existing being would agree to give up most of his power, the Voice could reset the multiverse to an earlier time. Of course, the Voice couldn't ask it that way. It could only ask if the Final Reaper was willing to start over from when Earth was first brought into Order.

There were many things - many abilities - that were simply too much a part of the Final Reaper to be removed from him, even sent back in time. Order's Voice was not made to remove ability, after all. It wouldn’t be fitting to have the Voice's greatest success die from too much power for his mortal body to handle, so he needed a stronger body. If he truly objected, well, the Voice would leave a way out.  Not that the Voice was going to tell the Final Reaper anything about it. That would be pointless - and impossible.

When he landed in his old body - more or less - on Earth, the Final Reaper once again became Thomas. He was both and neither. He needed a new name for a new life, and the Tutorial was the perfect place for a new name.

A note on the nonhuman lead tag: He isn't human, and hasn't been human for a very, very long time (or maybe not long at all, depending on how you count it). He still thinks of himself as human, either way.

The content warnings are mostly to give me room to write; this fiction is not intended to be edgy, but once in a while a character will swear or someone will get seriously injured.

The cover image is a Chandra/Hubble composite image of VV 340 / Arp 302 / UGC 9618. While we're not going to space any time soon in the story, people from elsewhere are coming to Earth - so it seemed appropriate. Plus, I like space imagery.

Since this is on trending and so far no Review ;)

The story is good and sucks you in (I had to binge read it). It reminds me a bit of "Defiance of the Fall" (This is meant entirely positive) -> If you enjoyed that story you are definitely going to enjoy this one. The story has an OP MC, but his OPnes is earned (no stumbling in cave and finding the Dragon slayer). So far the interactions between characters makes sense and the MC HAS ACTUALLY BEEN IN DANGER. So many MCS just breeze through everything, not here (well, not as much ;)).

Language: So far I didn't notice any errors, but I am no english native.

Character: I covered already that the interactions make sense, similarily the character just feels ... alive. As in I can think about the MC as a living being without difficulty. Similarily I can relate to the side characters and there is actually a consequence because he changed (not spoiling^^).

All in all this story is just good. So far I can take the introduced System and it would work in this setting without problems (as in, work in "reality").

It's a good story

It's a decent novel I like the story so far just not really so much the system making the main character guess what's going on with his status. Side characters need fleshed out more with how long they were staying around. Lancaster and echo especially. Rissa to a lesser extent. Maybe do a rissa POV chapter about her reaction to mc getting stabbed?

The book is exactly what you expect reading the intro.

So, really, can I even complain? Its basically mindlessly OP MC, written in a very detached and dry prose. The initial chapters consist of him starting out with an advantage,  unlocking this and that and getting non-stop stats improvements while still level 0.

Ah, and of course, casually impressing everybody around him by being the-very-obvious-protagonist and performing ground-shattering feats without ever much as blinking. Cause why not.