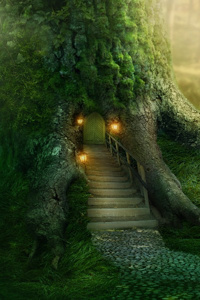 Lourianne Tome is a mildly talented, underachieving, slightly lecherous summoner who wants nothing more than to live a simple life away from her father's expectations. Those dreams are waylaid when a madman knocks her carriage off the road and sacrifices her to power a summoning. After a fateful encounter with a powerful elemental, Lou becomes something other than human and embarks on a journey to live happily and bring a little amusement to a god tired of the world's status quo.

This is a mainly slice of life story with a bit of action/adventure.

A few tags that need to be added here: 18+, yuri (wlw, lgbt), NSFW (and it doens't really have dedicated chapters, it is very much a part of the story), shapeshifter (and everything that comes with that).

Technically Smut, But No Complaints Yet

This is a very odd piece.  In some respects, I believe the basic premise is female slimoid hooks up with female elf who has a few festishes that the former is able to provide.  And, I think, from that lens, this is okay?  The execution isn't great in the first arc, and clearly comes across as an early work by an amateur.

That said, I think it's starting to hit its stride in Arc 2.  The sex is downplayed, there's a lot more worldbuilding, and we're starting to possibly get a plot going.  It helps that we're no longer limited to two characters, as we were for most of Arc 1.  It still comes across as an amateur work, but it's improving significantly, so I'm please to move this out of 2.5 star (not recommended) to 4.0 stars (recommended).

Thoroughly enjoying myself after just finishing arc 4. Hoping things progress with my favourite knight in arc 5!

Only real complaint I have (and a minor one at that) is that it would be nice to get a progress update every now and then on the growth of her mana coefficient (If there is growth that is).

There are many things I enjoy in a story, this has a great many of those, good smut, fun characters, a shapeshifting protagonist. It's everything I look for in a story.

Not that's it's quite perfect, but it will remain one of my favourites for quite a while i expect

Not sure what exactly I expected when starting the story; maybe something along the lines of a overpowered protagonist, a few love interests, and some humor. Nothing heavy or complex, just something lighthearted for me to read between bigger and heavier stories. I'm very happy I was wrong.

The characters are the strong point of the story. Deep complexity, different non-standard moral sets, one of them rooted in an interesting culture, subtle but constant development of especially the main character, fears, likes, dislikes, everything one wants from characters within a story. The morals of different characters are highly interesting, definitely not something most readers would agree with, but consistent and completely understandable when one knows the background and experiences of the person in question. A central point of the story is watching how the main character's conscience gets oh so slowly and subtly eroded by her close companions. Not to the point that I would call her evil, just maybe callous. People who don't like main characters with differing morals will probably not like this story, but it's a treat for everyone who wants to see a constant, complex, and subtle shift in personality caused by a multiple complicated characters interacting (and manipulating).

The relationships go the same way and are anything but simple. No harem protagonist who instantly charms every eligible person and turns them into a bland member of their harem. No, the characters and their relationships stay multilayered. I would even call them unhealthy for everyone included. In short, definitely far from usual.

On top of all that the story is a perfect example how smut should be utilized. It isn't something just tacked on as fanservice or the story doesn't contort itself to accommodate it. No, it is used as an additional (and very effective) tool to further show the relationships and feelings between the characters (definitely not just mushy ones). It fits neatly into the story and just adds to it overall.

The story itself is far more present than the synopsis made me think. It's more like a slower paced normal story than just slice of life. Reborn from Cosmos is definitely character-driven and not story-driven, so don't expect some gripping epic, but a good plot definitely exists, keeps things interesting, and prevents the reader from being overwhelmed by pure character-interaction/exploration/etc. Overall, it can switch between interesting, funny or satisfying, but it's never boring.

I have a few minor criticisms though: The pacing is not perfect, sometimes it just takes a tad too long until the main character gets to finish something they planned for a while (really minor thing, I've seen FAR worse), a subpoint of that is her power progression: she improves only very rarely, but then the improvement is massive. Feels kinda weird to quickly switch between those extremes. Especially how she can improve her body is kinda perfectly suited for a more continuous improvement; it would be more interesting and better for the pacing. Being a "trained human" for 3 arcs and then suddenly jumping to "Hulk" in a single mini-arc feels a bit weird.

Thirdly, a bit into the first arc there is a plotpoint which really stretched my suspension of disbelief. It gets somewhat excused by the fact that it got then beautifully used to add another layer to the relationship between the two main characters (an unhealthy one of course^^). Additionally it got a more reasonable explanation later one, but that one took quite a while (~300k words). Until then it feels like a plot-point out of a bad porn. However, it's not really that important for the rest of the story and I definitely recommend to continue reading; the complexity of the characters and their development (=the main selling point of this story) is often extremely subtle and gets more impactful and multilayered the longer the story goes; this early on it has barely started to be visible and stopping to read would be premature.

Sporadic grammar-errors can be found, but not to the extend that they would impact the reading experience. Funnily enough, the author seems to have a thing writing worse instead of worst.

The writing style is also great. The standard stuff, that is readability, description, flow, etc. is competently done. But I need to emphasize how the author manages to nail the "show don't tell" rule. Even the parts where the mind-reading succubus literally tells the main character about the personality of others are used to hint at the intentions of said succubus by looking at how she presents the facts and what she leaves out.
One small suggestion would be to add the commissioned art of the main characters below the chapters where said characters are first introduced. Would help to instantly nail down the mental image. (I never though Keirra would be that green for example.)

Reborn From The Cosmos

A collection of odd characters but their oddness is what made me read this series. Some instances made me raise my eyebrows though (like the trolls and stuff) but to each their own. I am lovin the way book 2 and 3 are moving. Hope to have a continuation and to read more .

I enjoyed what is already written of this story and can happily recommend the first arc alone as a well structured and enjoyable story, albeit more than a bit smutty and not a conclusion to the main characters story. The first arc is still a great origin story but revolves around getting affairs in order to return home which makes it hard to read standalone; you can't put down the story there. Not really a criticism though.

The second arc is coming to a close and while lighter on the smut it mostly feels like a power trip, not a true narrative. Perfectly fine as a bridge between greater story arcs but I hope to see more weight to conflict in the future.

With little time to build up any villains past them being generally unlikeable this leads to little investment in their downfall as the main weakness of the story so far.

A good enough start and the rising star read I've enjoyed most out of the dozen or so current picks I have read in any case.

A glorious and glossy Story

The story is realy entertaining and the yuri parts are well executed without getting to overboard. I hope we get more information or "screen time" of Cosmo he is an interesting character that we dont know much of. Hope u are all healthy and spread the love for Cosmo. ;D

Pretty good Story so far. Through a bit of force to get plot going.

Reviewed at: ARC 1-The Enchanted Forest-Part 11

The story (so far) is essentially a slice of life story, with a little action mixed in here and there. I'm assuming this is gonna change l based off of what I've read, and this makes me excited to see whats about to happen. I love the characters, and especially the protagonist as she's a literal blob of cosmic... blobness. Unlike other monster reincarnation stories the protagonist actually utilizes her new characteristics creatively. And instead of doing something basic like a goblin or slime she's become this half cosmic entity. Really enjoyable so far, and I can't wait for more.