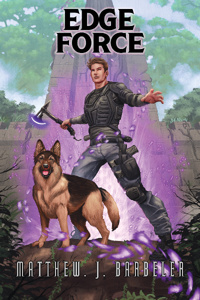 A clandestine organisation that leverages the best and brightest humanity has to offer to defend against threats to our reality.

JD Rideout is a washed-up writer with the best years of his career behind him. His kids are the only thing keeping him going, and he only has them half the time.

When JD wakes up on a tropical island in the middle of the Whitsundays, chained to the ceiling, he knows something is very wrong. He feels like a character in one of his novels.

He soon finds out that he’s been chosen to fight for the fate of the world. Those who fight for EDGE Force gain access to the ability to level up and gain powerful abilities to help them fight against threats to our reality.

JD is given a pistol and an axe, along with a new callsign: Hatchet.

As Hatchet, he’s tasked with fighting back against a shadowy cult that has reappeared after 15 years. But fighting the cult isn’t the only thing that drives Hatchet forward. These cultists use the essence of an Old God to reshape reality into whatever their imaginations can bring forth.

Uprooted and forced to fight for the fate of the world, Hatchet is the planet Earth’s last line of defence.

Six months have passed and JD has spent every day waiting to be called on again. Changed by his experiences on Mori Island, he wants another chance to be part of the fight for our reality.

The people of a remote settlement on the Transylvanian Plateau disappear overnight. This tiny village nestled at the base of the southern Carpathians yields more questions than answers.

Donning the moniker Hatchet once again, JD has to learn how to work as part of a team to fight back against another threat to humanity.

But this time he’s ready.

It's a good, decently written story

A bit of horror (although only horror themes, not actual horror), a bit of mystery, a lot of action and a bit of litrpg... But a lot of plotholes too.

We only have one book and there's a lot of questions that haven't been answered yet. A lot of things that don't seem to add up (although the author seems like he's planned for most, if not all of that, but it got a bit jarring for me, which is the reason for the lower story score)

The second weakness of the story is the characters, they're just not that good, they all felt entirely generic, only the protagonist had any sort of development beyond that, but not very much, he was mostly generic too.

There were some grammar mistakes in there but they were relatively minor, you know, little misspellings here and typos there.

The style was first person (which is generally bad) but it never broke POV from the protagonist (which is good, at least in my books, most authors who play around with POV changes manage to screw it up, it's exceptionally rare that I don't hate them).

And there you have it, it was a pretty enjoyable read, and a story that's at least a little bit different, at least on the surface, a more mature protagonist (even if he was a generic one, he was still a grown up married man with kids and behaved more or less in accordance to that), a different sort of fantasy, a different sort of litrpg (although not necessarily in a good way).

It's not quite at the level where I'd call it a breath of fresh air, but it's close, and I like it.

By the Numbers Modern Fantasy Novel

This is a solid, if very cut and dry, novel. The writing and grammar are good, and it is entirely readable, though the plot tends to jump from one line to the next rather abruptly. It is a LitRPG, but it really doesn't do much for the plot, and is hand waved most of the way through anyway.

The pace is... wonky. The protagonist spends an hour in a Journey into the Mind/Self Reflection sort of deal, and has to factor that they spent an hour in a precarious situation not dealing with anything. Then, later, they spend a day (multiple days?) in the same pocket dimension, while terrible things are barreling forward outside, and apparently nothing happens in real life while the protagonist is grinding?

As I said before, this is solid, but doesn’t do anything new. With a bit of modifications, I could fully see this as a novelization of a movie or video game.

Author says it is in Alpha but it doesn't read like it. Only one spelling mistake (a double ee) in 40 chapters.

Pacing is quick from the start and doesn't let up until the end, no real dead spots or places where it starts to drag.

Progression is a little quick in some places but so is the rest of the story.

Well done Author, give it a polish and you've got a good one on your hands.

A great story with relatable characters

The first novels I read from Mat Barbeler were his Crematoria Online books and I was immediately hooked. In this series, Barbeler does not disappoint!

Edge Force is the kind of book that keeps you turning pages and wondering what will happen next. It is a story of power and growth, with a relatable protagonist and supporting characters, who act like real human beings not some super-powered variant.

As an idie author, Barbeler doesn't have the support of published authors but he doesn't need it; his novels are polished publications already. Sure, there may be some typos but that happens in publications with large publishing companies so they are expected. What you can guarantee with Barbeler's books is that you will get a compelling story that reads well and keeps you engaged.

Start reading Edge Force today, and I know you won't be disappointed!