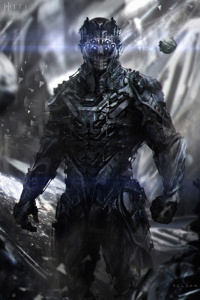 My name's Samson, and I'm a Soldier For The Terran Coalition.

Before War became my future, before it became all of our futures, earth was a peaceful place... Well not really but we did our best with what we were given.

And then the elven Gods of another universe decided they wanted to play a game, they wanted power, they wanted the Nexus point of all creation.... they wanted EARTH. And so they brought death, They brought pain, and suffering and loss unlike any other as humanity died in the millions. But they brought magic and the system and the catalyst for the Gods of earth to reawaken, fight and defend that which is theirs.

Now we're playing their game, fighting the war that they started, staining our hands with the blood of the innocents and the Guilty alike. But make no mistake, in this war of cosmic stakes, we will be the victors! We will be the one that seats on the throne of multi-univeresal supremacy. Because we have miracles, guts and the all too annoying trait of not staying the fuck down! and there are none in all of the universes more vindictive, more destructive than humans. This is our story, this is our tale! this is our saga! Our futures, for our children! Remember it!

This novel is also hosted on scribblehub. Please support me on my Patreon. Updates are sporadic but at least three times a week, so please show your support. Thanks 😊

The cover does not belong to me and was taken off the internet 😅. Discord server below

Reviewed at: Chapter 12: The Aftermath

A story with much potential. The premise, military with a litrpg system, magic and technology is unique. The character still has room for development and is well written (for RR ). Worldbuilding is nothing to write home about but definitely solid while combat has a good flow with well written enemies. The character dynamic between the humans is believable.

A solid and engaging military story (as far as currently can be ascertained ) i only hope the mc doesn't get to powerful to fast, and the author keeps his motivation to write.

I thought it was awesome, other than small grammer mistakes its really fun. Im really interested in where this goes, im realling likeing the world aswell. I like the charecters and weapons, the descriptions were cool. I cant wait to see other races and the main charecters god, I think i might have an idea of who it is but this has become one of my fav storys in just 9 chapters.