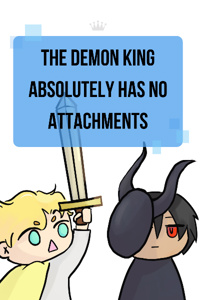 The Demon King Absolutely Has No Attachments

Welcome to Akoras Online, where the power lies in your hands. This sandbox virtual reality MMO has gained a dedicated community, but it has a catch: those who die in battle have their stats reset.

Spending all his time on the server to escape his shut-in life, Kas is the only long-time player with a death counter of 0. However, his social skills are also a big 0, so he's condemned as the cold-hearted “Demon King”. Now, the number of players who actually like him is also 0. (Which is fine. He enjoys the peace and quiet.)

However, Kas' dreams of being left alone are banished over and over by challengers with various grievances against him. Among them is Gabriel, the celebrity "Hero" of Akoras, who has just as much time on his hands as Kas. Seriously, Gabriel tries to fight him a lot. It’s getting kind of tiring… Wait, this guy isn’t even in high school yet!

The (not-so) idyllic trials of a Demon King and a Hero, with a raging faction war in the background.

Now updates on Tuesdays, with the odd chapter in between.