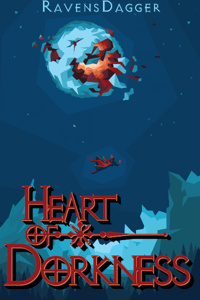 Nice but with some caveat

A good story, fun and light-hearted, as always.

However, there are two small problems for me that decrease my interest:

- the flashbacks chapters are interrupting the flow of the story, and without a good connection to the previous chapters. They feel abrupt and disjointed. I feel like reading two different stories, being interrupted regularly.

- this is a rewrite of "Princess", a fan fiction by Ravensdagger. I loved this novel, even if I didn't know the source. It was very fun and light-hearted. However, this means that I have a huge feeling of having already read this new story, even if Ravens removed the fanfiction elements, and promised a divergent story.

I guess I'll wait a little and hope the story will become different enough that I lose this feeling.

Meanwhile, it made me want to reread Princess !

The concept is agreeable but the format is just terrible. Constantly switching perspectives and points in time with seemingly no rhyme or reason. One chapter was just the previous chapter with about 60 words of new content, the rest was just rehash.

The story has good potential but so far I don't think it's being handled well, which is a trend I have noticed with this author, great concepts but underwhelming execution. In this case the daughter of a dark god who's only personality seems to be generally nice, throws money around and little actual depth.

its gets better as it goes on but the charicters are lacking in  realistic reactions, seeming to just accept whatever is happening with little emotion.

Another fun one from Ravensdagger

A naive protagonist, this time with some training on the world she's in, on her first mission.

I'm interested in seeing where it goes. I usually don't rate stories this early. Well-written. Not fast-paced, but not dragging either so far. The magic system seems like it will be interesting, and I'm still waiting for the monsters to play a role.

Nice start to a new story - based on your other works, I can not wait to see where you go with this. We always get the "I chose you after you died, you are going to be my hero" or the hit by a bus and boom you wake up somewhere else - but I have not seen a - I was holding hands with a chosen one and got draged partway through to a new world. Cant wait to read more.

I really like where this is going. The premise is a nice twist on the typical Isekai, and we are getting some solid world building and character work at the beginning. The LitRPG/magic system is gradually being revealed, and we already got introduced to both a current and future plot point.

There's some time changes, which can sometimes be confusing, but in this case it is done well and the chapter title indicates which time we will be in for that chapter. So far most of the story follows the main plot with a few chapters of how things started and one chapter from the future.

The main thing that makes this fun is the combination of the main character being both naive and unintentionally terrifying at the same time. My favorite part of the story so far is how she thinks traditionally scary things are cute, and I can't wait for more.

While not all of them are to my taste, I really appreciate RD doing lighter stuff; an awful lot of stuff these days is just too dark for me (reality has been depressing enough, frankly!).

OK, updated as there's a lot more now. It's fun, and kinda sweet, so far.
I don't care for the jumping back and forth in time; that's a pet peeve of mine for a variety of reasons. Otherwise, so far so good.

Valeria died in our world and was reborn in a not-completely-human body in a fantasy world, where she is adopted by the Dark Goddess. Dark, but not really evil, that is, this story is SFW. I'm not totally sure about the direction the story will go, but so far Valeria is going out into the big world for the first time, more or less running an errant for her mom. An errant that turns into an adventure.

This is a cute story and most of that cuteness centers on Valeria. She's a teenager who is obsessed with books and considers all kinds of monsters "cute". Well, no wonder, you probably read the story's title so you shouldn't be surprised about her main trait. So far, Valeria often appears a bit naive; I don't have much experience with children, but at times she acts more like an 8-year-old instead of the 14 years mentioned at the time of the main storyline (12 in the flashbacks about her arrival). But that's just a minor thing. All the characters are a little bit strange and not too deeply characterized, which is okay for a light, non-serious story.

There are some LitRPG elements (mostly classes and titles and appraisal boxes which show those) and an unusual magic system which works with emotions. There has been a bit of interesting lore/world-building strewn in as well. The story is mostly told in first-person style by Valeria, with a few third-person scenes from other POVs. Word choice and grammar are good, with very few typos. That the story switches between different points in time was confusing for me in the beginning; I realized what was happening after a while and the chapters' titles indirectly indicate to which part they belong, but perhaps it could be made a bit clearer.

All in all, I'm not totally captivated by this story because I can't completely place it yet. But it is a nice, non-serious pass-time, you can't go wrong with giving it a try.

Started this one late, which I think was an advatage as the different story elements had time to be introduced. Very different cosmology to any stories I've read before, and leaves interest in learning more about the world as the mc grows and explores. The blind guide is also a joyful surprise personality that I hope stays with the mc long term.

Early on but a good read.

It's a pretty good story and definitely worth it if you're in the mood for a light hearted read. If you're an old site user you might remember Cliche Cliche, it's like that but less confusing.

I'd suggest waiting just a little bit so the story gets rolling properly but it's worth reading now as well. We're still in that first quest, welcome to the world arc of the story so there's a lot of stuff that are still being setup. If compared to say, Cinnamon Bun (another of the author's stories), then we're still in the part where Broc is clearing her first dungeon and getting her pet.

Tl;Dr story good, light hearted, wait if you hate being cut off before setup pays off.

Happens a lot with RavensDagger.  I start one of their books and don't stop until the faded Next Chapter.  An interesting magic system, taking place on a world where monsters are a constant and generally understood threat to humanity.  The cool parts are the relationships between entities/individuals, I'm a sucker for a light hearted story with intense moments of exteme violence and darkness with an MC that feels like they have a unique circumstance...which is quite difficult to pull off I think.  A great mix of ideas that works great for me.  Please continue!