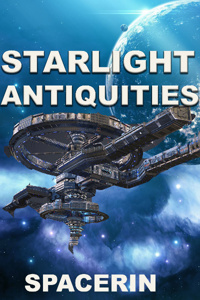 Jammie felt buzzed, not understanding how just a half shot of vodka could hit her so hard.
But then, she was buzzed, so she just brushed it all off.

Fuck the old goat, she told herself. Just don’t tell that straight to his face. Oh, no. Just smile. Wave and smile. And be business-like. Damn. I need a cup of coffee now.

She took a deep breath as she came to the entrance of the Starlight Antiquities and then decided not to just stand there.

“Do you think I can have a cup of coffee, please,” she said to the old man instead of a greeting.

“I have a headache.”

The old man, standing behind the counter, did not answer but stared her in the eyes.

Oh, where are my manners? “I’m sorry I’m late. It’s just, something unexpected came up.”

“That’s okay,” the old man said in a calm voice. “You’re not late. Let me show you to that food-duplicator you want. And then I can show you where you can make a cup of coffee for yourself.”

“Oh, that would be great! Thank you, thank you so very much. Really appreciate that.”

“I see you already started to celebrate.”

Jammie gave him an inquisitive look.

“You reek of cheap booze even from the front door. You better know, all the good money you squeezed out of me will not last you very long if you continue like that.”

Jammie held her tongue there, and just shrugged her shoulder.

Good. If I continue. He knows nothing. Just chill and move on. Business as usual.

“You youth are helpless.”

“Don’t worry. One cup of coffee will fix me just fine. Besides, I don’t need that cup of coffee to fix up some old food-duplicator, but to deal with old bastards like you.”

The old man answered to that with a low-noise growl, the one a deadly dog might give out before he jumps and tears your neck out.

“You’ll work in here,” he said taking her behind one of the doors and a room with a long desk and a bunch of dusty old electronics scattered all around.

“I guess I have my work cut out for me, no?” Jammie asked, looking at all that mess.

The old man looked at her strangely and asked. “Do you know where that saying even comes from?”

“Yeah. Now come here. Your voice dances all over the place. Before you touch any of that stuff, get yourself that cup of coffee from there, and make it strong,” the old man said and nodded his head down the empty corridor. “The kitchen is two doors down to the right.”

Jammie almost said 'I know'. It was good she stopped on that one drink as she held her tongue in that time.

The kitchen was just as she saw it last night. Impressively neat with stainless steel appliances. She started a coffee machine, the aroma sharpening her mind even before the first drop of it landing on her lips.

“Would you like me to fix you a cup of coffee too?” she asked politely.

“No, thank you. I don’t need caffeine to put my mind in gear,” he said as he turned around to leave. “Or talk to old bastards like myself.”

I’m fine. Everything is fine. And now, the opportunity is here. Who knows the next time I’ll have it, she told herself and knew exactly what she wanted to do.

With a cup of coffee in her hand, she entered the corridor and made sure the old man has left to the front counter. Then she moved two doors down.

She touched the handle. One click down, then push it in, and then two clicks up.
The door opened quietly just like it did in the video last night.

Looking down the corridor to see if it still remained empty, she stepped inside the room. It was full of old books and folded documents packing rows, and rows of shelves.

She tapped on her comm, and the spy ball that flew in here last night following the old man fell down into the palm of the head from the ceiling where it spent the time concealed.

“Only five percent energy left,” she read it with a disappointment in her voice.

She did not want to lose any time playing with it now, so she dropped it down into her pocket.

Then she swiftly walked to the left side wall and watched the video of how the old man shuffled some of the books there.

Duplicating his movements, she moved the books around and watched the whole section of the shelf suddenly drop down inside the floor, revealing a door to the safe.

There was a keypad there and she pressed the code she saw the old man enter, and the door of the safe opened without a sound.

As soon as she stepped inside, the dark safe suddenly lighted up. It was the size of a normal room, measuring good twenty feet by ten, probably bigger than her sleeping quarter. The shelves were stuffed with leather boxes of all sizes. She opened one and the light from the ceiling bounced off the gold coins and gleamed into her eyes.

“That much for not having money,” Jammie muttered to herself, almost angry.

Another box had platinum coins, worth probably more than the whole space station together. There were boxes with diamonds and a box where three spy bolls were neatly placed.

“So, he already sold two of them,” she thought.

Strangely, but looking at all that richness, she was not tempted to take not even a single coin.
“It’s not mine. Why would I want it?” she told herself when that thought struck her.

Yes, but an honest fool I am.

In the far corner in the room, right next to one obviously very comfortable armchair, was a strange-looking helmet. It was translucent with about a dozen strange rounded diodes inside. It was made of some kind of composite material, certainly not glass or plastic.

She did not know why, what hell got into her there, but she instantly decided to place it on top of her head.

It lighted blue and a split second later, she was inside a blue screen with different signs and letters popping anywhere she looked.

In the middle, it said

“It’s some kind of a stupid game,” Jammie said, but then realized that she was the stupid one. “Why would he keep it in a safe? And what kind of a game costs 10 million credits to join???”

Then she remembered she must have spent already five minutes inside the vault.

You should be scared, Jammie, If you’re not scared is because you are stupid. So, are you really that dumb?

The sights of last night's murder flashed in front of her, and she jumped out of the safe, and shut the door right away, then moved the nearest book on the shelf to have the disappeared bookshelf pop up again from the floor.

Running to the room’s door, she had almost forgotten. Her cup of coffee, sitting on one of the shelves where she left it when she caught her spy ball.

She sighed and cursed herself for being too careless and swiftly picked the cup up, scurrying to get through the door and not noticing a little water ring that the cup has left on the dusty shelf.

Luckily, the corridor was still empty and she ran back to her workroom.

When a moment later, the old man came in, he found her at her table, folded over her work, contacting her old university to send her in-detailed schematics of all the food-replicators ever produced.

She took a sip of coffee, scratched her head, and looked back at the old man. Gave him even a nice smile as she said, “This might actually take a little while. I may need an atomic analyzer.”

The old man did not say anything but growled, then turned around, and left her there, closing the door behind.

Then he walked down the corridor, pressed a few keys on his comm, and let a small part of a ceiling morph itself into a silverly-shiny ball as it dropped into the palm of his hand.