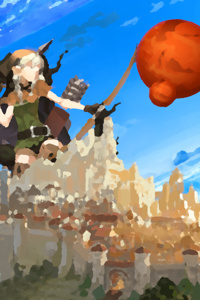 After three years of war- the worst came to happen... elves won and have succesfully set back humanity to the stone age fearing the industrial revolution and now, humans are practically defenseless against the great migration of this century, now they prepare for the worst while the elves promise to aid, but their help is taking too long to arrive and they fear it was all a false promise.

Frelse is a lone hermit who faced the first beasts to appear. Now rescued by the elven princess he is faced with a personal request from her, she never agreed to the war and now wants to help the humans. But will he accept to save the race that shunned him?

Ezkaia is the princess of the elven kingdom and so, she swore to protect nature and everything that makes it. Humans threatened the balance and now they have been dealt with. However, the new king; his brother, is planning to exterminate them. Will she betray her kingdom to protect the beings that make her beloved nature?