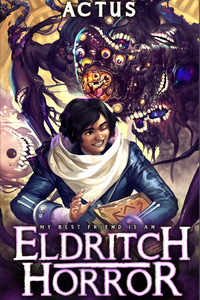 My Best Friend is an Eldritch Horror

Great story, well written, original concepts and very enjoyable to red. a solid 4 out of 5 stars. the opening chapters were really, really good. i would give it a higher rating but theres only 1 nitpic i have.

the pace is way too slow, its not unbearably slow, but because the story has so many interesting elements, anything other than progression feels like your standing still. How does what has happened to the MC play into the larger world? whats the history of the world? what does his magic look like? what does the [REDACTED] look like? what does combat look like? what kind of magic can he learn? and such are extreme points of interest after the main premise is introduced, but 22 chapters in and the MC hasnt cast a single spell? and hes still on his first day at [REDACTED] i would understand a slow pace for character development but thats not the case, the chracters, outside of the MC so far have been introduced, theres no excuse for this pace, there are whole chapters that could be reduced to a few paragraphs. its still early days but the pace is a bit irritating. if i wasnt binging 22 chapters in one go i would have put this in 'read later' and never revisited it. the author does the story a disservice by making the pace so slow. its actually very good! even with the slow pace its very enjoyable, i ended up breezing through the first 22 chapters, but unlessing your binging all the chapters reading this 1 chapter at a time waiting for the next release with little to no progression in each release would be quite a painful experience.

Reviewed at: Chapter 3: A strong case for checking your work.

I really love this genre and this book stnads out from a lot of the rest!

I am a big ol sucker for the magic school trope and I think this one does a really good job of it!

Henry is funny and scary at times when the writer wants him to be.

I also really like the dynamic with him and his girl roommate.

Super cool magic system as well, and a good message!

Reviewed at: Chapter 3: A strong case for checking your work.

A new and interesting take on a genre with a lot of competition! The author does a great job with writing the characters to be both enjoyable and believeable! I am usually not a huge fan of progression fantasy, but I do enjoy them when they are done well, and this one definitely does it well. A really good mix of both humor and serious tones that you do not usually find in this genre. Definitely check this one out if you are even a little bit hesitant.

This story has an interesting set up with people sumoning a being from another plane and then getting magic. The MC messed up and has Henry instead. The writing is good, chracters need more work but as it has just begun there is room for it. Right now the story is about the point that the description tells new readers but I'm looking forward to reading more.

The only issue so far is theMC is kinda wimpy and while I think he will find a backbone right now its a little hard to deal with him.

I love it. After the beginning section, it's a touch slow, but comfortably slow, easing the reader into the whole experience without dumping too much information at once. I am immensely excited to see how it will continue.
Read this. Now. The author is good and experienced, the characters are interesting, the magic system is only just being expanded upon as of when I've read it. It's great, I love it, read it.

Reviewed at: Chapter 30: In search of a cultivation method

A good start (though a bit slow) and interesting read.  It's got me hooked and looking forward to see where it goes. Hopefully more of the world will be made known and the magic within it.  At chapter 29 and the author hasn't described much of the world yet that's why it's only 4 stars right now.

The story is an amazing take on the Eldritch Abomination trope that has recently been booming in popularity. Basically,

Our protagonist, Damien, gets a magical familiar. But instead of getting a normal one like everyone should, he summons an eldritch entity from beyond the universe itself — Henry.

The story follows his adventure, and we see him slowly come to terms with the fact that he has an as-ancient-as-time-itself higher dimensional being held back only by the summoning contract made with Damien.

The story progresses nicely. The characters feel real, and the protagonist is pretty realistically "built", making the plotline more logical. It has a fresh take on the story, assuring that the characters feel real and more than just speaking puppets. The story progresses slowly, so that may turn off some people, but this is genuinely a really good book. From the nice writing, pretty-good grammar, I'd say there isn't anything you'd dislike about the book directly.

Though, I need to say, the book does include a magical academy. If you think this is too cliche for you, that is fine.

Quite Promising! (but maybe needs a driving force)

Reviewed at: Chapter 19: Don't get the free food

(Update: Author has stated he is still improving/tweaking the beginning of the story so some of these small comments might have been fixed.)

The intro is a good description to the story so I won't sum it up again.  In summary, it is too soon to give firm reviews, but I would give it a try.

This story is a moderately fun magic/summoning story, but it is more of slice of life than an adventure story currently (Discussion below). There is not much Eldritch horror going on yet past the initial meeting. Also, the school system seems more cultivation sect style than mage tower type school.

The world isn't well described yet, but he is from a small town so it would be weird if he knew much other than the basics. (Although it is weird his Dad didn't come home for so long... Just have him drop by occationally. Less weird that way)

The characters seem to have some sort of emotional depth to them.  (They have emotions and their emotions change based on the situation... Sounds small but few stories get this right.)  However I would prefer some dialogue where they have longer discussions.  So far it is fairly curt and dry at times.

I am really not a fan of 4th wall breaking, but it happens rarely as is more for comedy.  I would vastly prefer a character comment on with the opinion or do some reminiscing than a narator statement or commentary. That is an author's style though.

Overall, not bad.  However author, you need to either start describing more of his day to day life so we enjoy listening about him or you need some driving/motivating plot point as the eldritch aspect got me interested, but is mostly resolved currently (again below).

There are two issues I would like to bring up:

One, an eldritch horror would have absolutely been able to do things like reading his mind by mind breaking him. Not being able to do that unless he looks at it makes Henery really inconsistent.

So I recommend just putting some throw away line about how he couldn't do that as in the temorary summoned state it was only his concious WILL that was keeping him there.

Two, the story is written like an adventure story (forces he can't control moving him around and him trying to adapt.  He even seems to meet hero type characters)....  But as far as we know there is nothing actually wrong anywhere around him....

Just adding in that most people would banish Henery if found (and thus perminately cripple Damien) or maybe just kill Damien would actually add some drama and suspension to the school life even if it is just to tie us over until something big happens.

(Note I like the slower slice of life approach, but it needs something interesting happening to drive the urgency for us to pay attention)

I absolutely love it. This story alone encouraged me to join the site. There isn't much to go off at the moment but the magic aspect is captivating enough to make me want more right now. Giving It Who Heralds The End of All Light a teenage-ish mindset to accomodate Damien's thoughts is a great idea but could be toned down a bit. Once again a great story and highly recommend it!
To the author: Amazing job. Can't wait for 38!

Reviewed at: Chapter 30: In search of a cultivation method

Very nice story so far. I love Henry right now, he fits the template of cocky teenager perfectly, a nice counterbalance to the beta ish mc. I feel like the magic has crazy potential, there won't be any random ass op-ness for the MC cuz of the fact that Henry is too far removed from humanity to help him. Writing this of my own volition and not because of a potential bonus chapter. :00