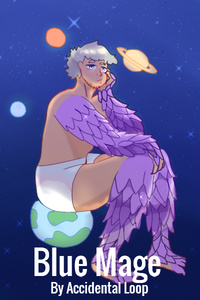 The end of the world is the best thing that ever happened to Jace. All of his life things have gone well until now. Now Jace has graduated college but can't get a job in his chosen field due to this young age. Watch as a depressed Jace learns to enjoy a new monster eat monster world.

Only posted here on Royal Road!

Great at what is does

Reviewed at: Chapter 25: Above human

Blue mage is pretty good at what it sets out to do. And that is to give a OP mc and a fun fast paced story with a cool evolution system.

The story starts with our mc being transferred to a tutorial and offered a class and the story shoots off from their. As we watch him grow stronger and learn about the world.
As we learn more about the mc he comes off as fun and likable but is a little boring. All he does is fight and grow and I personally love this. It's also great that he has in story reasons as to why he acts the way he does; and they actually make sense.
But I feel his character could use a little variety

One way I can see this changing is having him study the monsters. It was already established in chapter one that the whole reason he became a veterinarian his that he loved learning how animals do the amazing things they can. The author could even use a situation like right now. Jace stopped leveling that could mean he doesn't have enough records and while he does eat and kill a lot his first core class skill is about learning from monsters.
I feel like this would go a long way in making him more interesting without taking away his pursuit of power. He could study monster when there aren't enough to eat to gain the skill.

The side characters are fine if a bit simple but should change as the strory goes on. They also pick up a bit of the slack and help keep the story interesting. I just wish we followed jace a bit more.

The last good thing I wanna talk about is the system and that it's simple but their are things we still don't know about. Like why do certain people get certain class or why where people's tutorial different  lengths.

On to the negatives

I don't have that many only two that aren't nitpicking. They are the grammar and lack of information.
grammar  was never my strong suit but I'm can spot small problems here or there like a word spelled wrong or used in a way it's not supposed to be.
The info might be a bit of personal taste but I wish the author would give us more info like is the mc the only one going to have that op class and if so why. Things like that kind of dig at me.

Overall if your looking for a story with a op mc that's not a murder hobo"well not to humans" this story is great.

The first two spoilers are nothing couldn't figure out how to remove them.