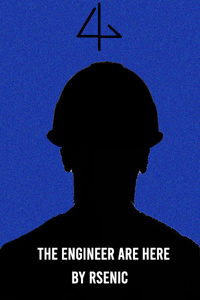 Engineer Chapter 1: I Am An Engineer

"Eric Bry. Born in Malaysia  and brought by your parent to the States when you were just 2 years old. Graduated from Cornell University when you were 19 and lost your family in the same year and two years later here you are." The lady look straight into Eric Bry eyes. "Yes Ma'am.", replied Eric.

"It seems like in your resume that you have no prior job experience and based on that you are willing to take a much lower pay to become our Machine Engineer.", blurted by the stout HR lady.

"While today is your first day reporting in our company, I am sorry to say that we will have to let you go due to some unforeseen circumstances. Seeing that we haven't signed any contracts with you today, I am deeply regreted to informed you like this but you will not be receiving any severence pay."

There no remorse or pity in the lady face. Eric was left stunned by the sudden news. Soon after , the lady call for the intern to lead Eric out of the office before Eric decline the offer and proceed to leave by his own.

"Wow.", exclaimed Eric while waiting for his Uber ride home. The very interaction his just having today is very weird and to think that he would be fired on his very first of reporting in was a thought that never in a million years will he entertains.

Eric listened to the sounds of the car honking and looked at the busy people rushing along the streets. While he was still contemplating, his ride arrived and he proceed to back home.

Why would he be looking for a job when he has huge inheritance money. His late mother was a top researcher in viral diseases while his late father works for highly prestigeous John & John Pharmaceutical as researchers and together they made hundreds of millions of dollars in inheritance money. If it was anyone else but Eric they will enjoy the money and live in a huge penthouse by themselves drowning themselves in boozes and drugs. But Eric think otherwise. He used to thought that he cause his parents demise. The circumstances leading to their accidents was that he were graduating and his parents are driving to the University to congratulate him. Since then he has been blaming himself and only come to terms with it several weeks ago.

The ride home was uneventful and quiet. When he arrived at his home in Queens, he found that an unassuming brown package was placed at the door.

"Did I ordered anything online?",amused Eric to himself.

He pick up the box and found out that is was quite light and enter the home with it.

He brought the box to the kitchen and open it. Inside was a meticulously design watch with lcd display and a Symbol on the underside of the lcd.

The symbol in questions was similar to number 4.

" Wow, this is great craftmanship! What kind of alloy did they use here?", exclaimed Eric. The color of the watch was dirty grey similar to titanium alloy. Without any regard he slapped on the watch to his wrist. " When did I buy this watch? Did the delivery guy sent it to the wrong house?", mused Eric.

While he was admiring the watch, the symbol lightly glow and soft hums were emitted from it.

The noise then stopped and the lcd begin emitting lights and letters begin appearing.

-NAME?- prompt appeared with keyboard appearing floating infront of him. What appeared to be a hologram nearly took him by a suprise. But excitement quickly took over him. Such invention surely surpass current technology by atleast 20 years but why would it appear infront of his home?

Eric type his name before a new prompt appear

"Occupation?", Eric mind wondered for a while, he never had a job and the college degree that he have is mechanical engineering. He even applied to become an Engineer before ultimately the company fired him on his supposed first day of job.

"I Am An Engineer." thus Eric fill in the Occupation as Engineer.

The keyboard vanished and the screen darken for a while before a new prompt appear.

[HELLO ERIC , MY NAME IS ALTER AND I AM YOUR COMPANION]

"Artificial Intelligence? Hello Alter what can you do?"

[MY JOB IS TO ASSIST YOU TO BECOME A GUARDIAN.]

"And what is a Guardian?"

[GUARDIAN ARE TITLE GIVEN TO INDIVIDUAL TO PROTECT THEIR CIVILIZATION AT ALL COST. ONLY ONE GUARDIAN EXIST AT ANY TIME IN SINGLE CIVILIZATION.]

"What?",exclaimed Eric," Are you sure this is not a prank or anything like that?"

[NEGATIVE,PLEASE ACKNOWLEDGE THAT YOU ARE TO RECEIVED A BEGINNER PACK, Y/N]

After contemplating for a while, Eric finally say yes

"Whats a BP points and how do i used it?" asked Eric

[BP POINTS OR BLUEPRINT POINTS ARE CURRENCY THAT GUARDIANS SYSTEM USE. YOU CAN USE THE POINT TO REDEEM ANYTHING IN THE GUARDIAN STORE]

"How about lucky draw?"

[MISSION CARD IS  A CARD THAT WILL GIVE YOU A MISSION SEPARATE FROM MAIN MISSION, SHOULD YOU COMPLETED IT, YOU WILL BE REWARDED]

[MAIN MISSION ISSUED,"ESTABLISH A COMPANY WITH ATLEAST 10 EMPLOYEE WITHIN 1 MONTH. SHOULD YOU REJECT OR FAIL THE MISSION, PROCEED TO TERMINATE USER AND SELECT A NEW GUARDIAN. Y/N]

The mission prompt startled Eric. It seems like he have to accept the mission or face the consequences. He didnt want to take any risk of decline the mission seeing that declining it will resulted in his termination and he would not gamble on to try to see if it will or will not kill him for sure.

[MISSION ACCEPTED, ADVISED PLEASE FILL YOU COMPANY WITH VALUEABLE EMPLOYEE AS IT WILL AFFECT YOUR RATING]

"Looks like I cannot just hire anyone and be done with it, more like it will be a sequence of missions relating to the company establishment.", mumbled Eric.

He don't know why but Eric feels like he was dancing with death by wearing the watch in the first place. He feels like the world are conspiring for him the wear the watch and accepted the mission.