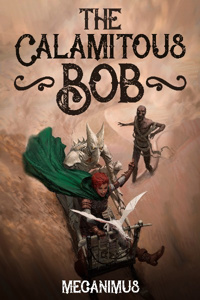 Good story, not my favourite style

The Calamatous Bob is a well written isekai fantasy litRPG which definitely deserves a comedy tag, as it defines the whole stories tone.

Although I like my stories to be slightly darker and less of a slap stick comedy act.

The story often dictates your mood into a vulgar soldier kind of humour (knowing Bob's background it's understandable), and when you have to slap your thigh laughing every second chapter because of bobs/solfis egdyness, it takes out a lot of the wonders and mysteries of magical fantasy world, which i highly prefer.

Only the earlier chapters, before meeting her problem solver golem, really hit my tone. After that it got a bit too much into wiping out stupid undead with funny spell names and ridiculing the local fleshbags about whether they're able to do photosynthesis.

Nonetheless this is a great quality story, just not exactly my prefered style.

Speaking about quality style... A Journey of Black and Red, a Vampire story taking place in North America during Colonisation, by the very same author, is darker in tone, if I remember correctly. Might be a reason for the author to broaden their repertoire.

Just pure Bliss to read this one! Humor is just up my lvl and the story continues progressingly. Never gets boring and i cant wait for the next chapters! Right now its under my top 5 list. Pls continue this awesome story.

Vivian is a medic in the French Special Forces. She is also no longer on earth. Specifically, she is in the remains of a city that was magically nuked. Through her skills, awareness, sheer willpower, and a healthy amount of luck, she has to try to survive. Soon she has to find her way across a desert in hopes of finding civilization that isn't in ruins.

She has the help of a communicative golem core named Solfis, but even it doesn't give her good odds of survival.

It's an interesting premise, where an all-powerful god goes into the body of a human on Earth, and instead of outright killing them, they send the human into the fantasy world he presides over. The human is a trained female French special services soldier and field medic. Has daddy issues. Wish there was more POV from the god trying to live his life on Earth, pretending to be the human he replaced.

Fairly standard System (classes and skills and simple stats), with frankly ridiculous ability/perk grants at stat milestones. Levelups so far seem based purely on practice and training, rather than xp from kills, which is nice.

Different Mana types, mc is apparently unique in that they are fully black-attuned and should be dead ten times over. All people in the world have life-mana, due to growing inside a mother. MC's body was just made fully-formed as it was on Earth, memories intact. Can't wait to see when this plot point will be the cause of a major conflict.

Author's descriptive word choices are rather strange throughout the story. Almost like they kept a thesaurus open and tried to find a cool-sounding word every third paragraph. It is the author's choice, but it does make it hard to read sometimes.

I've never seen a story from a pet dragon's perspective, and the few bits that occur are humerous and great additions to the story. Apparently nobody has ever managed to tame a dragon - I'd love to find out why eventually. Do tamers rely on forceful magic that doesn't affect dragons? Are dragons naturally resistant to all types of magic? How smart do dragons get? The allusion is there, but would be nice to have it stated concretely eventually.

In conclusion, the premise is good, the magic seems to be well-defined, the style is strange, and the humor is well-placed. The MC is on the path to absolute OP-ness. Fights are well-written. I'd recommend it once more chapters are out, because as it is, it still reads like the start of the MC's grand adventure, and you'll be left wanting for more when you finish the latest released chapter. Maybe read up to the aftermath of the big fight at the fort, that's a good stopping point.

I'm seriously loving this. The scenes where Viv is pissed at someone always gets the feeling across and I like it. Idrk how to explain it but the strong emotions are portrayed well and I am able to connect with it. I'm looking forward to when Viv can be considered a calamity lol. Keep up the great work author!

Even Better than his other work

Reviewed at: Chapter 18: The Bringer of Death

This book is SO good that I read all chapters in RR and every single chapter in Patreon over a weekend. Mecanimus has matured as a writer. His other work - a Journey of black and red is well written. However, it tends to be slightly boring at times and has trouble sometimes holding the reader's interest when the story wanders.

Calamitous Bob is written in a more focused style. You get the feeling that the author has actually planned the story out with an end-goal in mind. Sure it has elements of comedy - but they are mostly dark comedy. Be prepared for undead - loads of undead and fear at the beginning.

The story is well-paced and thrilling. It starts as a gritty survival story in the beginning - she has no chance at combat early on with her stats/skills - and gets into action when the MC manages to reach the edge of the deadlands and is better trained as a caster.

The grammar and writing is top notch. The newer chapters on Patreon may be a bit rough but the ones on RR seem to be well-polished.

Do note that the story is touch grimdark. A fair amount of characters, even people you might like tend to kick the bucket on a regular basis.

The only negative thing I have to say for the story is that I wish the author would give distinct speech patterns for different characters.  Too many people speaking American english in the same way is distressing. Basically, though the characters are distinct, they (incluing the MC) all feel as if they grew up in the same neighbourhood.
Report

It is nice. A travel companion from the start helps presenting the story in a form of dialogues instead of endless inner thoughts like it is usually the case with the loner characters in some other books. But sometimes the story goes a bit overboard with the self patting on the back.

Reviewed at: Chapter 14: The Other Mind

pretty sure i already read this somewhere before several years ago

i love the pet dragon and the references