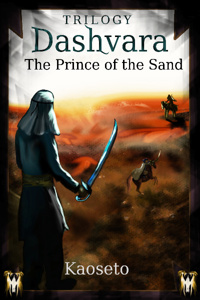 The Prince of the Sand

“Today you have to be the strongest man of all, son. After we deliver you, you will survive, and we will die.”

When the Xalya Dungeon is about to fall under the attack of an alliance of savages, the last lord of the steppe entrusts his firstborn with a painful mission: Dashvara has to pass himself off as a member of an enemy clan, as a Shalussi, to exact revenge in a shameful way. Forced to see his people killed or enslaved, this heartbroken but still proud and humorous steppe man will soon be dragged in a surprising adventure that will shake his will and beliefs.

This story follows Dashvara as he struggles through foreign lands and discovers that the world is not only made of deserts and horses but also of “civilized” societies with strong bureaucracy and slave-based systems.

Author's note: The fantasy setting has some ancient Roman influences. Also, expect a bit of slice-of-life and comedy along Dashvara's philosophical journey. Despite the “gore” tag, violence is not the focus of this story and descriptions are not particularly gruesome.

This is a Creative Commons By work. It is a reworked and continued translation of a trilogy I wrote in Spanish between 2016 and 2018.