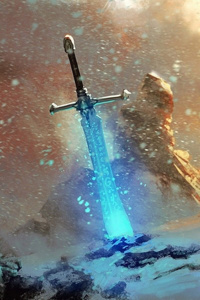 The Dark war left Ereden in shambles, but after centuries of calm and the blessing of a long dead Goddess, the once great civilizations of the world could thrive again.

The Raleigh Kingdom is one such civilization, and they fought tooth and nail to claim what was lost all those years ago. Succeeding to some degree, the kingdom regained its land, seized the once turbulent sea fronts, and rebuilt its great cities from the battles that left everything devastated.

However, one thing still eluded the kingdom, and each day without it the nation was nothing but a whisper of its former self.

The descendants of the past noble houses. Bloodlines that were able to harness unique magics that helped lead the kingdom to greatness time and time again. And with powerful enemies seething at their borders, they will need them.

Decades passed, and finally after a long tedious search, children bearing the smallest hint of those bloodlines were found and nurtured.

Wes is one such child, and after finding which house he hails from, things change. His life in a frivolous manor is no more, and until he can perfect his craft, he will be nothing more than a name mentioned briefly within the history books.

Through hardships, sweat, blood, and death: He will rise.