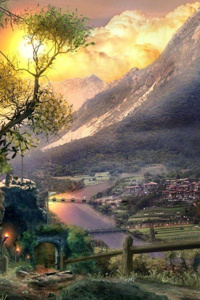 My Life As An Adventurer

It is truly an odd feeling being dead and floating in the blackest void of nothingness. To experience the sensation of weightlessness and the endless darkness that spanned the endless expanse of this place. I knew I was dead for the sound of a train crashing into the driver's side of my car and the rolling and scraping of metal upon the ground was more than enough proof of that fact if none else had worked.

I knew not how long I floated amongst the great darkness nor do I know when I first saw the pale blue light that made itself known to me. Time had no great meaning here, at least in any way that mattered to anybody but myself and even then it was losing its pertinence. It was for this reason that I touched the ball of bluish light and why I was soon engulfed in its boundless rays of light such that I could see not but white.

The gatekeeper was immensely bored. Nobody had even so much as walked past the massive gate in nearly a year and yet here he was standing inside this tiny as fuck booth waiting. Waiting for what he hadn't a clue but if he left his post his boss would tear into him like a tiger pouncing upon its prey. So as much as he hated this mind-numbing dull job he remained in place if for no other reason than he didn't want to deal with his boss. It was at this precise moment that I unceremoniously dropped a few feet in front of the massive gate like the most clumsy of individuals.

"Fucking hell my eyes. What in the nine rings of Hell was that"? I yelled to nobody in particular mostly because I didn't know anybody was even nearby.  The gatekeeper, in turn, eyed me with a mixture of both bewilderment and joy. In all his 750 years as the gatekeeper, he had never once seen anybody exit a transdimensional gateway. Everybody before had always walked through the mile-long tunnel. So that meant this human wasn't from this plane of existence.

"Hello, human do you need any help with your...eyes"? The gatekeeper asked as he slowly made his way over to me carefully because well I just appeared from thin fucking air and that never was a good first sign. I, in turn, did my best to look at him but that damnable blue ball of pure evil had caused me to see big blobs of reds, blues, greens, and yellows swimming in my vision.

"Yes if you can please do". I said once I was sure I was at least facing the man. Almost at once the man placed his hand over my eyes and spoke in a language I was absolutely sure didn't exist on Earth at any time in all of human history.

"How are your eyes now...human"? The man said and it was at that point I picked up on him calling me human. Did that mean that Heaven housed every sapient species in the known universe or was something even more outlandish happening here?

"Where am I and who are you"? I asked finally being able to make out the...elf that stood before me. My question seemed to surprise him as he took a step back in surprise.

"Oh, you're in the kingdom of Tornelius. I'm sure my king would love to meet you. It isn't every day we have people from another plane of existence pay us a visit. In fact, you are the first as far as our records go". The elven man said as he helped me to my feet.

"Um thank you, mister..."? I asked still not getting his name.

"Oh, most sorry my good man. My name is Legolas Groppersea and you are"? The elf man answered as I got over the fact I was facing a fucking elf. A real elf. Like in some fantasy role-playing video game.

"Oh, sorry my name is Andrew Wellstone. I'm um...from the planet Earth. I'm from the :kingdom: of the United States...province of Berkeley ". I said finding the very idea that I needed to list my planet odd but it seemed I wasn't even in my own universe so it seemed like a necessary addition.

"How lovely. Now how about we see you in properly". Legolas said as he returned and took down my information. My best guess was so people knew who I was as I would clearly not exist in any of their records nor anybody else's in this world. Once he was done with his various questions the gate opened without so much as a sound and in we walked. Another elf, this time a woman took over his post who promptly fell fast asleep upon sitting down. The odds anybody else would show up was next to nill and everybody knew it so why not take the added sleep.

We had been walking down the cobbled road for close to an hour before we saw the first village called Ateaul. An odd name for any place but I was standing beside an honest-to-goodness bonafide elf who apparently existed in some other plane of existence. This fact only grew when I saw other humans, dwarves, some sort of reptile-looking bipedal creature that I was told later on were called Argonians and other such fantastical fantasy-like creatures buying or selling their wares or who were busily walking up and down the many busy streets and alleyways. It was in so many ways a surreal experience, to say the least, that I was sure I had caught the attentions of many passersby as we walked through the small village. My choice of clothing doing little to hide the fact I wasn't from around this place if my constant twisting and turning as I looked at every little thing like a newborn baby seeing the world for the very first time had failed to do the task. It would've been cute had I not been a man of nearly 30 years.

Nevertheless, we found an inn on the edge of the village that was at least spacious enough that we needn't sleep together. For as open-minded as I was the idea of sleeping beside a man, elf, or otherwise was a thought I didn't at all enjoy having. No, it was far better and appropriate in my mind that we had separate beds in which to rest upon. The first rays of the new day entered our room far too soon for me as my poor back felt awful as I got up from what passed for a bed in this goddamn world. My stomach sounded its demand for food almost as soon as I had opened my eyes to greet the new day. Looking over at my traveling companion he only laughed heartily in response.

"Oh, my you must be ravenous after our walk last night. Come let us eat before we depart for the capital city". Aegolas said as he seemed almost to float over to my bed in a fluid motion.

"Here are some golden eagles. I have the feeling you have no means of buying anything so take this as a gift". He said as he handed me a handful of golden coins before he raced out the door and down the wooden stairs.

"I feel like I'm living in a fucking Dungeons & Dragons game". I muttered to myself as I pocket the local currency before I too exit the room. The common area was loud and filled with smoke and the smell of ale and the sounds of laughter and merriment. It didn't take me long before my eyes land upon him already at a table. Two sizeable cups of some yellowish drank lay inside.

"What is that"? I asked as I eyed the unknown liquid inside my own goblet, calyx, or whatever their word for cup was here in this new world of mine.

"It's dragons piss". He answered before downing the whole thing in one motion. I can only eye the elf before me with a look of utter disgust. He seemed to pick up on that as he started waving his arms frantically.

"No that's just its name. The village once had a dragon attack it a long time ago and as the story goes it was killed where this inn now stands. So they named this delicious drink after it due to it having the look of well...piss". Legolas said as I lift my own cup and took in a small tentative sip of the poorly named drink. For as bad a name as dragon's piss was I couldn't deny that it tasted surprisingly sweet. So much so that I ordered another and a few bits of meat. An hour later we were once more on the road. The afternoon air feeling great on my face and the sights and sounds were a welcomed distraction to what was clearly going to be a long walk. Looking over at the only person I knew I asked him how far was this city. His answer floored me.

"Two more days". He said without missing a beat. I could already feel my back start to pain at his answer.