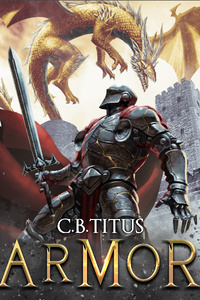 I was created as the ultimate dungeon trap: a living suit of armor that devours any adventurer who dons me. My master created me for his entertainment, leading adventurers to ruin and betraying them at the last moment. This time will be no different.

Or so I thought.

Now I'm living the life of an adventurer. Hopefully, my companions won't realize I'm not who, or what, they think I am.

This story is meant to be a book rather than a serial, there will eventually be an ending. It is also my first book length work so while I intend to do my best, mistakes and issues will occur.

I want to see this story go the distance

I typically don't commit to reading stories on this site until I feel that they're far enough along to where I'm not worried they'll die at the drop of a hat. This usually means around the twenty chapters mark, and maybe a couple favorable reviews.

If you're reading this review before my normal commitment point, then you likely were also drawn in by the story's excellent presentation (this review has actually been difficult to write, in part because Armor sells itself so well that its hard to sell it better). For you, allow me to say with confidence that the story is just as good as it appears, if not more so.

For anyone reading this after that common tipping point, I hope that this story continues to be as wonderful as has been so far. Its rare to see a fantasy story with such a beautiful style of "show don't tell" in a genre that is so heavily influenced by both the works of literary giants and the statistcal and detail oriented mindsets of video games.

Excited to see where this story goes.

The story is very well written and has very few errors, which is always a plus.

Seasoned readers will recognise certain elements from other stories in the genre, but there is enough polish and personal touches that I feel like they truly deserve to be there through merit.

The characters are nice and well developed, including those outside of the primary group. This is always a sticking point for me, so I am glad that they each have their own little foibles and ecentricities to add to the immersion of the story.

Grammatically, the writing is solid and has very few errors. Punctuation is used appropriately and barring a few exceptions, is close to flawless. The chapters thus far all read very well through TTS, so I really appreciate the extra effort in polishing it up.

The story is very interesting thus far. I am glad that the author hasn't exposition dumped everywhere as other less confident authors have done. This really lets you immerse yourself in the story and learn more about the world orgnaically, and I appreciate that.

If I were giving a basic review, I would probably give Armor a 5. But I feel like I haven't quite read enough just yet to comit to that for an advanced review. however, I feel no regrets in adding it to my Favourites and Followed lists. Definitely worth keeping an eye on.

So far so good.

Ordinarily not a fan of the monster protaginist concept and the idea of a mimic protaginist... less so. Despite this bit of hesitancy on my part the author manages to pull out an interesting character who seems to be worth following on this journey.  Some fairly good sources and inspirartions used and I have high hopes for this.  Give a try.

Exciting premise that - to be honest: catches me more than most concepts of top novels on RR -  good style and execution and I get the feeling this will be one of the top stories for the next weeks/months. The only bad thing is that only 100 pages are released since the story is still fresh and the wait for new chapters therefore on the first day of reading...

Entertaining Writing and a Novel Concept

The story drags you in from the very beginning!

Armor does not waste time with overly flowery language and is more about stuff happening. Already at 100 pages the books has had 3 small arc's wrap up. They don't feel rushed in anyway either. The world, characters, and larger plot have all been given small peaks and feel interesting.

Excited to see where the story goes!

The style of the writing is original, and the overall feeling is of an accomplished work. It has the good balance of adventure, suspense, intrigue, action, and most of all, humanity, even if the MC is not human at all. The development of the character and the world are very well done.

Reviewed at: Ch. 9 Round One

A fascinating tale about a Mimic-Armour that finally gained a conscience after his fourth meal. Following its travels out of its master domain, we are treated to a somewhat fresh approach to adventuring tales.

Style: With a third-person perspective, we're treated to the inner monologue and "feelings" of our protagonist armour. There aren't grand graphics or tables, replications of letters being centralized in the page for effect. The story has a nice flow to it, I'd see it as normal to fast-paced. Combat can feel a bit clunky at times, where certain areas have a whole paragraph with some actions only getting a few words.

Story: Starting with a character that has previous knowledge of an area, to exploring the wide-open world with memories of those it had eaten previously, the story is told both through recollections as well as observation. I get a sort of Goblin Slayer vibe from the group dynamic, though that could be due to the protag just being armour. The progression the armour has is engaging as it adapts to life as a masquerading adventurer.

Grammar: A few errors here or there, combined with some rough transitions. in total it's far above average.

Character: As the protag is technically five different entities, we are treated to a wide area of expertise and emotions that are encapsulated within the armoured entity. Some deliveries feel wooden at times, though this could just be due to its infancy. Supporting acts are well done, though I feel aesthetic descriptions could use a touch-up.

Cursed armor finds a new life as an adventurer

Adjusted my review because I'm still thinking about this story weeks later (i'll be back to read some more).

A cursed suit of armor consumes an unsuspecting hero that is part of a quartet of adventurers. It's not long before our fiend discovers that something is seriously amiss. In a critical moment, filled with acceptance by his peers, our cursed fiend makes a decision that forever changes the course of his ... unlife.

The story is told from a first person perspective and gets you aquainted with our adventurers really quick. The action from inception to critical juncture. As a result there's not much time dedicated to world building, or initial character development, but that doesn't take away from the familiar charm of the story.

Alphonse Elric, is that you?

A very cool and fairly unique premise without isekai or litrpg. I think at the moment it's more of a start of a self-finding journey from a non-human perspective. With some deadly problems of course. I have immensely enjoyed the read so far and would recommend giving it a try.

Disclaimer: it's not Al or in any way to do with alchemy.

Style is fine, easy to read and the fight scenes are well written. Nothing extraordinary, but also no boring or confusing parts or info dumping. We get to know the world step by step and in a relative organic way through the eyes - and past meals - of the main character.

The story has a lot of potential and could go anywhere, no clue what will happen next. One could argue that some events happen a bit abrupt, but until now everything had a reasonable explanation and could also be influenced by the main characters lack of knowledge in some situations. We've had a lot of run-ins with the forces of the antagonist, which is unusual for only 13 chapters, but I guess the main character kind of keeps stumbling into them by not dying early. It's been fun so far.

Grammar is fine, especially for this website. Both story and grammar could use an editor to clear things up and fix small things if it ever goes professional, but honestly it's pretty good.

As for the characters: First is the main character, extremely interesting, great first person perspective and the main reason to read this story. Their character is still growing or developing, eating meals, finding new things, knowledge and emotions from time to time. Something that's a huge plus point is the often non-violent approach to things. That doesn't mean he doesn't kill, just that he looks for other solutions when they are availbale. Quite a creative mind and an astounding amount of common sense. Often the side characters are more interesting than the protagonist, but until now that hasn't been the case. That brings us to the side characters, the companions. We don't have insight into them, but each has their own traits and background. They are easy to keep apart and show a more human perspective compared to the protagonist. They could use some more fleshing out, but the story is still young and has time to grow. They also help with the world building and are the main reason the protagonst isn't wandering randomly in a forest somewhere. That's actually one point of concern for the main charcaters development: at the moment, it's more of a tag-along until my identity is revealed kind of situation. We don't really know his goals or if he has them. At some point he should make decisions based on more than "I like you so I won't kill you" or decsions of convenience.

Overall I will keep reading and hope for many more chapters!

The execution was smooth and grammars has few errors base on my qualifications.  This author feels like a professional one and he can convey emotions base on his/her characters personality. I dont usually rate this early cause of past "trauma" and most of my rate has "profound " comments . I'm not good at grammars myself BUT I can see mistake of others so I am sure and felt this author's deep thinking.. the MC dont have PLOT ARMOR. That makes it undefeated. But is strong from the start and not OP.  I love this novel now.