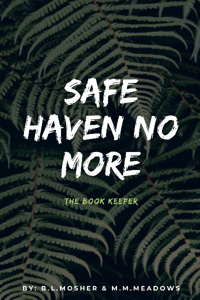 The people around Atrimeaus were nothing like those in his dream. They were small in comparison. Their hair colors varied wildly as well as their appearance. Three of these people were hanging off of Atri's left arm, three more on his right, as well as two per leg. Several more of the strange people rushed over as an elderly one waved them to come. These people were a bit larger than those who held down Atri now and wielded crude spears affixed to their backs with thin vine.

Atri screamed towards the Elder. "Who are all of you people?!"

All of a sudden, they stopped and froze, letting go of Atrimeaus entirely. The Elder tilted his head at the strange white-haired man before him, not seeming to understand what he had said. However, the Elder then stood and slowly shuffled over to one of the people wielding a spear. The Elder was thin, with wrinkles covering the entirety of his body and a shiny bald head. The Elder's body covered by an assembly of dried animal hide held together with vine. Upon reaching the red-haired spear wielder, the Elder motioned for the man to hand over his weapon. The young man retrieved it from his back and gently placed it into the Elder's frail hand. A thin smile comes across the old-timer's face as he begins to shuffle over to Atri.

Suddenly Atrimeaus found himself gulping in fear, a bead of sweat rolling down his forehead onto the stone-tipped spear aimed at his throat. The cloud of dust behind the geezer was impressive, small indents in the sand where he once stood shaped like feet.

"We should ask you who you are, boy." A voice like sandpaper erupts from the Elder's chest.

"Why do you speak the tongue of our oppressors?!"

While the Elder was speaking, the rest of the people all seemed confused and shocked all at once. Atri was feeling about the same as them, not knowing of what the Elder spoke. Slowly Atri raised his hands in surrender to the old-timer, closed his eyes, and let out a deep sigh.

"Honestly, I have no idea what you are talking about," Atri said softly, shaking his head slightly.

"LIES!" The Elder shouted as he shifted the spear slightly forward in his hand, nicking Atri's throat. A small trickle of blood flowing from the wound down the man's neck.

"Look, crazy old bastard. I woke up in a god damn cave on the top of the tallest cliff I have ever seen." Atri glared daggers at the Elder, his hand coming up to grasp the shaft of the weapon. "I jumped on and rode some flying behemoth down the face of the cliff after TWO DAYS of waiting!" Atri's grip tightened around the pole, the wood creaking and splintering slightly.

The Elder's eyes widened some, taking a few shuffling steps back away from Atri. Still grasping the spear, the Elder attempted to bring it free of Atri's grasp to no avail. The effort of which was akin to trying to pull a fully grown tree from the ground. Just as more people were about to rush in to help the Elder, he held a hand up and spoke words that Atri did not understand. After doing this, the rest of his people stayed in their place, not daring to disobey the Elder's orders.

"I let go of the beast, fell into a great river flowing faster than any I have ever seen." Atri continued to bellow out, the wood of the spear cracking more as the man began to stand from the position those holding him had left him in.

"My memory of how I got up there on the cliff is gone, and I have faced death nearly every day since!" Atri's eyes began to shine a bright light from the iris, a noticeable power behind them. The spear shattered in the young man's grasp, his voice louder than ever.

"Now you stand before me, pointing your weapon as if I have done something wrong!" Planting his right foot firmly in the sandy earth of the cave, Atri took a step towards the Elder. Rage flowed from the man like the river he fell into on his misadventure to this place. However, a moment of clarity came to Atri in that enraged state, his eyes falling to his puncture wounds. They were bandaged, crudely, but effectively. No pain came from them whatsoever, some black substance peeking out from the edge of the bandage. Then all at once, the rage left Atrimeaus as he fell to his knee in exhaustion.

"Forgive me, for I did not mean to get that upset. You all saved me without knowing anything about me." Atri said as he looked up at the Elder, who had moved back several more feet from him.

"No, we should be the ones to apologize. I acted out of my fear and attacked you unprovoked right after you had awoken." The Elder spoke in a shaky voice as he returned to the place he was seated before everything had gone sideways.

Just then, Atri noticed the rest of the people around were shocked and confused to their core still. Some tilted their heads at the two's conversation as if not understanding a single word. Looking around more, he noted the stunning cave they found themselves occupying. In the center of the roof, a massive hole allowed light to flood in. Four exits bored through the walls around them. Vine ran all along the smooth grey stone walls, flowers blooming down them occasionally. The sun shone down its wonderous light down on them from overhead, signaling it was mid-day. There were no decorations nor anything to signal that these people had been here very long.

"I extend my thanks for saving my life from the venom. But can your people understand the words we speak?" Atri looked back to the old-timer seated on a large rock.

"No need. By all accounts, you should be quite dead by now, as for my people. No, they have no idea what we are saying to each other. We shall keep it this way. I do not wish them to ever know of the past, including this dead language." The Elder looked at Atri solemnly as he continued. "Back on the first subject, you are the first I have ever seen survive a bite from the Venu. Their venom has proved fatal time and time again. The medicine we had given you was merely to ease your suffering a little as you passed on." Shaking his head now, the geezer laughed a bit as he finished. "Honestly, you scared us all half to death when you woke up! It's why my people jumped on you to hold you down."

"Then why the shock from them when I spoke if they do not understand us?" Atri's face held a puzzled expression upon its features.

The Elder grew quite upset at this, agitation in his voice as he spoke. "They may have been young back then, some not even born yet. But, what they have done to us will be engrained into our very souls. The language you and I speak is quite powerful, though it seems you do not know it yet." The Elder sighed heavily, thinking for a moment before finishing. "I would prefer not to speak of the past any further with you. Soon I will teach you our language, and I ask that you only speak it while with us once you learn."

"Understood." Atri nodded his head, thinking a moment himself.
"Venu?" Atri chuckled to himself at the name, trying to change the subject before offending the Elder anymore. "I like it! much better than what I have been calling them."

"Oh?" The Elder smiled at Atri, "What have you been calling them?"

"How...Creative.." The Elder cracked a half-smile at Atri, the disappointment very clear on his face as he struggled to stop his eye from twitching. "Catch some more rest. We leave in two days. What is your name?"

"Atrimeaus, but you may call me Atri... I assume you and your people move often?" Atri looked at the elder one more time before turning and walking back to where he awoke. The question hung in the air for a moment before the Elder answered.

"In short. Yes, we must to survive in this land. I will Explain more over the coming days. As well as teach you the basics of our language. For now, rest well!" The Elder's voice reached Atri's ears just as he was lying down once more. Feeling confident he would get some real rest for once.

See you all again on Friday!