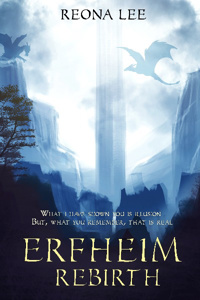 It had been two years since Ace had seen a funeral or cremation in Hilfheim. The all-black clothes he usually wore to the tomb hung in the closet, untouched. Busyness in the spring was less. Usually the mother would be busy preparing for the Spirit's Day ceremony with her father, then leave for the graves of her grandparents in Barl City. However, since an accident took his father, his little family is in chaos.

Whenever Ace saw the news about the accident or asked the police, there was no definite answer regarding the body of his father. The loss of her beloved husband was enough to drive his mother going crazy. Whatever Ace did and gave to his mother was never enough. Because from the start, the mother's love was only for her husband. Ace only binds them both.

Maybe, in his mother's life, Ace was just a nuisance and shouldn't have been born. Since then Ace decided to rent a small apartment for himself, while his mother returned to her parents' house. Every Sunday or college holidays, Ace takes the time to visit his mother who lives like a doll who knows how long. Sometimes Ace hates the woman because she has no intention of getting up. However, even so, Ace always hoped that his mother figure would return.

Ace looked at the photo of his parents hanging on the apartment wall. The photo that Ace believes is a wedding photo. The figure of a beautiful woman in a white dress that wrapped her slender body, as well as a man in a black tuxedo, smiled widely. The only memory Ace has other than his parents' house. He can't stay in a house that reminds him of his past.

Ace left the painting, then turned off the television which continued to show silly movies. Television has been muted from news of natural disasters, accidents, and murders for no apparent reason. Even his father's death sounded hopeless. Because of the silent television show, many people attribute this oddity to the devil's pact.

There so many times Ace has heard people talking about it, both on the subway, the station, and on his own campus. Sophisticated people living in 2031 sound stupid to believe that. To Ace, demons, angels, fairies, wizards, or anything related to magic was just a fairy tale. Like the online game market. There is no such thing in the real world.

The sound of the bell of the city clock tower interrupted Ace's thoughts. The clock tower that is hundreds of years old marks the time of Arc City, the capital of Hilfheim. Every hour, the bell will ring. People will stop the activity, then say a prayer. Just like a fool hope for something from an ancient clock. However, for Ace, the tower is nothing more than a symbol, an old memory that can be forgotten at any time, just like his father.

Ignoring the people who were silent to pray, Ace continued on his way. The distance from the apartment to the subway is not too far, only about ten minutes. As usual, he would stop by the convenience store next subway to theto buy his mother's favorite instant beef soup. Ace hopes this food can make his mother better.

Less than thirty steps away from him, a large man collapsed to the ground. His heavy moans were still audible, his legs and arms were still shaking in pain. However, there are no signs of violence by a group of people if the man was ganged up.

Should Ace help him? If she helped the man and took him to the hospital, it was likely that he would be late to visit his mother. He also missed the opportunity to experience the expensive and hard to come by superfast trains.

Ace shook his head. This is none of his business. Since his father's death, Ace has been determined not to interfere in people's lives. It's no use at all. However, when Ace was about to leave, a yellowish blue light appeared that controlled the man's body.

Ace's chest that had felt loose before now became tight, until it hurt when the man disappeared. Only fragments of light were left that slowly disappeared. Less than three seconds. Even Ace was sure the clock tower bell that used to ring for three minutes was still going on. Hesitantly, Ace slapped his face, hoping this was just a bad dream. However, the pain on his face made Ace immediately realize that this was not a dream. However, is it possible for a person's body to disappear so quickly?

Although Ace is so bad in science lessons, Ace still believes the human body can't disappear like that. There must be something. But what? What reason makes what just happened sound logical?

Ace was silent. Cold sweat suddenly flooded his body even though it was still morning. He glanced at the large clock in the center of the city. The ringing of the bells has ended. The people who had been praying are now moving again, doing their usual activities as if nothing had happened just now.

Wasn't there anyone who saw what happened besides him? Ace could clearly feel his legs shaking with fear. He couldn't say anything. The bluish-yellow light, the disappearing body, the absence of cremation and burial. His brain had linked all of that without permission. How could such a thing exist, right? Ace didn't dare say anything or report to the nearby city security. Not. He just needed to forget about it and act like normal. He had to quickly buy instant soup, go on his coveted superfast train, and then meet his mother. Nothing to worry about. The next day everything will be fine. It must be an illusion. Magic, devil's covenant, or anything else doesn't exist.

However, no matter how hard Ace tried to ignore it, the man's strangeness continued to haunt his mind. A sense of choking led Ace into the alley earlier. Cramped and a little dirty. Ace tries to re-engineer events. He stood where the man lay, bowing slightly. So what will he do now? He didn't have any preparations.

“Crazy, why should I believe in the devil and magician agreement? That's right, it's 2031. There's no such thing. Nothing. Nothing." He shook his head several times as he reassured himself. He thought it better to hurry to the subway before it was too late.

Ace's steps stopped because the surroundings felt strange. The sound of the wind gave Ace the chills. Everything is like a hallucination. However, he had a strange feeling and the calls felt real. He felt that everything was moving slowly. The big clock of the city is also electric cars. His vision was dim from the beam of light so bright that it slowly turned completely white.

Come to think of it, he did take lightly the rumors that were being talked about. He felt naive. He thought this would never exist. Either magic or a pact with the devil. For a second, Ace never believed that the hope he had longed for would also disappear.

Ace felt his body as light as a feather and his head throbbed. Then everything turned white. Ace's entire body started shaking violently and numbly before shattering into thousands of pieces of light.

The sound of footsteps slowly turned into the hum of an engine. Ace jolted awake. Slowly, he opened his eyes and blinked. He was panting. He spontaneously touched the body with his own hands. His body is still intact. After spending a little time adjusting his vision to the glare of the light, he sat down. However, an extremely intense dizziness hit his head. He waited a few minutes for the dizziness to subside then began to adapt to his surroundings. Ace ignored his dimly lit gaze and continued to observe where he was.

However, where is he? What happened?

This room is all white. He's alone.

With confusion enveloping him, Ace stood up. No floors, walls or anything. Is he flying? No, he could still feel his feet moving, treading on something unseen. He didn't hear nor smell any scent, only felt the cold air piercing his covered skin.