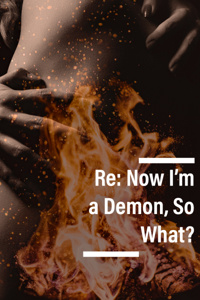 Insert interesting pre-chapter author notes here.  Hope you all like this chapter. We're finally getting a glimpse as to what kind of powers the cambion's going to have. Enjoy!

For the cambion, it had been a dreamless sleep. Exhaustion had carried him off the night prior and nothing disturbed his slumber save for the boiling hunger that exploded out of him the instant he gained consciousness. Literally, it felt like the hunger exploded out of him.

His status window had warned him that the Ravenous Hunger status abnormality would take over his mental faculties if he didn't eat. That did not prepare him for the experience of having control over his body suddenly torn from him as his feral demonic nature became aware of prey and acted before the cambion's own consciousness could process what was happening.

He saw a cat and then the cat was gone.

Faster than the batting of an eyelash, he felt as his body jerked forward like a serpent. His jaws unhinged, opening his maw to an impossible size. Then felt his own stomach erupt from his belly in a flurry of teeth, clamping down on the poor cat's head.

The creature thrashed wildly, but it was hard to say if this was the struggle of a living creature or the reflexive twitch of a body refusing to accept it was already dead.

The cambion came to his senses as his distended, toothy stomach retreated back into its rightful place inside him, taking the cat's head with it. He was left holding a spastic headless corpse with blood still fountaining from its neck.

He hesitated, then realized he was still hungry and took another bite. Then another. Soon he was face deep in the creature's viscera, devouring and drinking blood in impossible gulps. He ate flesh and bone and fur alike indiscriminately. It was the first taste of meat he had in this world, and while an echo of his memory tried to shout out that the taste was revolting, there was another part of him that reveled in the savagery and delighted in the taste of blood.

Suddenly his senses were flooded with the stench of urine and shit. The corpse's bowels chose that moment to unclench and the smell overwhelmed him. It brought him back to himself and he dropped the corpse and recoiled.

This is fucked up. I'm eating a cat!

This thought hung in the air for a moment as he wondered why it should bother him. He was hungry and the cat was food. What other frame of reference could he possibly have for the way the world should be?

The cambion swallowed the ball of meat and hair it had been chewing and something clicked inside him.

Images and impressions flooded his mind. The images were memories. Sounds and smells and pictures, they were all so vivid that for a moment he felt a rush of excitement as he believed himself to be finally remembering his old life. He was remembering his life in the before!

Memories of being a curious kitten, of hunting mice and birds and blinking through space then pouncing on unsuspecting prey. Memories of discovering a best friend, his favorite person, and he remembered the name his best friend called him.

Even for the cambion, it was hard to fathom that he was literally less than a day old. It was especially difficult because he felt that he wasn't. No, he wasn't a day old, he was someone from somewhere else who just happened to be born yesterday. In his heart he knew he was a man and that his memories were suppressed, but they were important to him and he wanted them back. The cambion was certain in his heart of hearts that whoever he had been before wouldn't have liked eating a cat, let alone someone else's cat.

"I'm sorry little guy," said the cambion looking down at what was left of the corpse that had once been Mr. Blinky. Only the bloody lower half of its body and tail remained. "I wish there was something I could do for you now, but... for what it's worth, thank you for your sacrifice."

The cambion clapped his hands together and bowed. He felt bad and not bad at the same time, as if his psyche was emitting thoughts of two different natures. The he suddenly laughed out loud as the thought struck him.

"I think that whoever I was in the before would have taken this very hard. But you know what, Mr. Blinky. I choose to walk a different path. I'll figure out who I was, eventually. But here, right now have to make a choice. I choose to let myself be okay with this. And do you know why? It's because at least you're not a dog. Small mercies, am I right?"

His musings and very one-sided conversation were suddenly interrupted as a surge of vital energy flooded into him and through him. It was similar to the surges that flooded him last night preceding every growth spurt, including the one that had killed his own mother while partially still in her womb. Those had been frequent and dramatic over the first few hours of his life, so he became intimately familiar with them before they slowly tapered off. The thought occurred to him that maybe if he had consumed more sustenance, he might have grown faster. Perhaps now that he had finally eaten some meat and satiated some of his hunger, he was about to have another growth spurt.

No, this felt different. This felt like that moment of weightlessness just before falling.

He wasn't really expecting an answer. And he wouldn't have been able to comprehend one if it were given to him, because no sooner had he asked the question than he found himself hunched over in the most excruciating pain he had experienced in his exceedingly short life.

It started in his abdomen. A bubbling and twisting, as if his intestines had become snakes and begun writhing in anguish. His blood boiled and heat eked from his pores, melting his skin. He clutched at his eyes as they swelled near to bursting, and barely noticed as his fingernails were ejected from the tips of his fingers. The bones in his face shattered then shifted. It was about the time when his teeth fell out that his mind finally shut down from the pain and he collapsed near the corpse of the slain Mr. Blinky.

Though the cambion could not hear his own choked shrieks and crows of pain during his anguish, any one who heard them might have said they sounded markedly feline.

Which is why, even though their source could not hear them, the one who did hear the cat-like shrieks of pain grew very alarmed. His cat was precisely what the man had been looking for.

It was not long after the first cries of pain that an oafish near-giant with a squished nose and a square face crashed through the trees and discovered the scene.

Blomdorf's eyes beheld the tail end of the cambion's transformation but did not comprehend it. All he saw was a bloody shape of a person pick itself up from the ground, where at its feet was the bloody remains of his beloved Mr. Blinky. Only its gory bottom-half remained, but even by what little there was, he could tell. Even under the blood he recognized the stripes, the white fur on its belly, the perfectly black tip of the tail...

The near-giant sucked in a lungful of air like a bellows and howled.

Still screaming that grief-stricken scream that seemed to have enough volume and air to go on forever, Blomdorf's horror filled eyes shifted to the bloody apparition in front of him. Even for someone as lacking in mental powers as Blom-Blom, it was easy to see who there was to blame. Those eyes suddenly narrowed with hate.

The scream shifted to a lower pitch and even louder volume, and the very earth trembled beneath their feet.

Have the last couple chapters made you feel anything for Blom-Blom? Just so you know, if you don't post comments, I might stop writing.  (Pouty face) JK!

I would love to know you're out there. SOOOO even if all you have to say is "Thanks for the chapter!" I'll take it.  Seeing new comments get posted is like feeding the starving author so she has enough OOOMF to write the next chapter. Especially this early in the process.