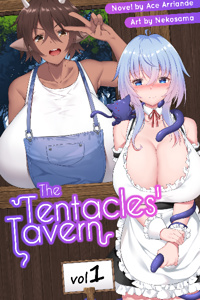 What's better than somebody with normal arms and legs working in a tavern? Somebody with tentacles.

When one man wakes up and finds himself dangling over the endless sky below, in a small body with tentacles and without any memories, he is immediately thrown into a fight for his life. He doesn't know where, who, nor what he is. He does, however, know that he has no intention of becoming dinner for wild beasts.

Fortunately, he discovers that the floating island he's on is populated with people who are accepting of his unknown status so long as he makes himself useful. The beautiful women on the island are nice, too. Even better for the new tentacle creature, they like cute things and tentacles.

Unfortunately for everybody on the island, their quiet, peaceful life can't exist without interruption forever. With livestock being stolen for food more often, a lurking danger may threaten the lifestyle they have come to know. But until then, there's always more work to do in the tavern!

Style: 5/5, similar to Ace's other stories, this one has a slice of life feel with a heavy focus on character interactions and the building of relationships, both romantic and platonic. The world is introduced in a detailed, interesting way without info-dumping, and the sex scenes are well written.

Story: 5/5, Lots of character and relationship development, but also including some mystery and major decisions the main character has to make that will determine his future. The plot is moving forward at a decent pace.

Grammar: 5/5, Very good, all chapters are released early on Patreon where most issues are found and corrected, if there are any.

Character: 5/5, The main character is a small tentacle creature with evolution based abilities in a lite lit-rpg style world. The side characters introduced thus far include a few potential partners, some of whom seem guarenteed at this point, and a number of people that add to the world in making it seem more real. Some of these are the old man in the tavern, the granny who runs the place, or the lovely couple he meets while running errands for the first time.

Overall an enjoyable read, though NSFW in some chapters.
Review as of Chapter 28 for early readers.

I absolutely LOVED this story. It's a cute slice of life story featuring an amnesiac protagonist who finds himself in the body of a cute and tiny tentacle monster. It has vague hints of possible adventure in the future, what with the mysterious

killing of livestock by an unknown monster at Korova's farm.

But even that mystery is very much a background thing, with character interaction, humor, ecchi, and lighthearted fun all being far more prominent. If you're a fan of ecchi slice of life and romance, I would HIGHLY recommend this story.

As far as style and grammar scores go, both of them received a full five stars. I didn't detect any noticeable grammar mistakes throughout the entire story. As for the style, it's a straightforward but descriptive style which avoids flowery metaphors while still managing to be fully satisfying. Beyond that, even though it's written from the protagonist's perspective, the author still manages to include information the protagonist is unaware of. For example,

the author managed to have the protagonist remain believably unaware of Lada's perverted attraction to him, while it was extremely obvious to the reader.

The story itself is, as I stated above, a charming slice of life narrative. The story is so much  a matter of character interactions it's difficult to separate from the character score. If I had to say something about it not relating to that, I'd comment on how well the author gave relevant information on his setting without using info dumps. This is the first story from this author I had ever read, and it was obvious from the beginning the author was relying on a pre-built fantasy world already described elsewhere. Even without having yet read those descriptions elsewhere, however, I received just enough information to not be lost. The closest I ever came to misunderstanding something was early on, and even that was minor and quickly explained. At first when the 'readers' shop' was mentioned, I was assuming it was referring to a bookstore or something, and was mildly confused. The next chapter, however, fully cleared up the confusion over the terminology, and fixed my misunderstanding.

And finally, the characters are where this story really SHINES. Each character that has been given any level of focus feels distinct and memorable within the story. Their interactions feel mostly believable- and in the one case of a character who has a bizarre quirk, the believable reactions of others sell the character as still feeling real.

Namely, when we found out that Granny was harsher on people she liked, as bizarre as the quirk was, Lada described a situation where people responded believably to it.

Despite having nothing in the way of actual memories or history, the protagonist still feels like a well thought-out character, who may (or may not) have his past revealed over time. Come to think of it, he's not that different from the other characters who have received the most focus, in that regard. The protagonist comes to the town not just unaware of his own past, but unaware of the townsfolks' pasts. In the same way he's not terribly motivated to learn of his own past, he's similarly lackadaisacal about theirs. Yet it's obvious that many of them must have exceedingly interesting backstories the author is hinting at. For example,

Korova in particular was depicted as likely having a mysterious past in order to have a soul as a transbeast while still being accepted in the village.

Given that I gave all four sub-categories five stars, it might seem a bit odd that the overall score had only four and a half stars. By the time I was nearing the end of the story, I was fully planning on giving it a full five stars. But then the story ended up propogating dangerous misinformation about female anatomy in a sex scene. As much as I feel like it was a genuine accident on the part of the author, the real world impact of the myth he was repeating have negative effects on women.

Namely, in the sex scene in chapter 27 seems to indicate the protagonist sees the woman he is having sex with is a virgin. The dialogue is fully written out, it appears, and none of it has her verbally telling him this. So I'm left to assume the author believes it's possible to visibly discern if a woman is a virgin. Presumably it's the old 'virginal unbroken hymen' myth.

In reality, a hymen with no holes in it is a rare and serious medical condition called an 'imperforate hymen'. The reason it is so serious is because if it is not treated, menstrual blood will not be able to escape the body, instead being trapped within it. I think you can imagine the end result of that without me going into detail. Furthermore, as early as 1906, doctors purporting to conduct 'virginity tests' in which they claimed they could visibly detect such a thing were tested. These doctors proved to be so incapable of ACTUALLY making such a distinction that they even made the mistake of labelling known prostitutes as being virgins. Since then, the evidence that such tests are nothing short of quackery has only grown, yet it is still legal for doctors in first-world countries like America to advertise otherwise.

And... yeah, that was awkward to type out, but real women across the world are harmed by people believing in that myth, so I felt like I had to do it. If the story was edited so the protagonist couldn't visually determine a woman was a virgin, it would deserve 5 stars.