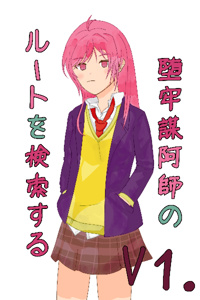 Searching for the Daromu Route.

I've always believed that I lived a fairly normal life as a teenager. I was a normal student who took part in the student council and I spend a lot of my time at home playing video games with friends I've met on the internet.

I never really had much that was worthy to be noted for. I just lived my life as any other student would. I didn't have too many friends but I also had a fair number of friends. We would go out to karaoke once every two weeks or hang out at each other's houses.

I lived by myself since my parents were working high-profile jobs which is still normal for a student. I worked part-time to manage the rent of my small apartment with some income coming from my parents. I didn't think too much of it though.

I never saw my parents much. They'd come on odd days just to visit before leaving the country to go back to work. The closest contact I've had with them besides their inconsistent visits were letters and voice messages that came at random intervals.

I didn't contact them much either as I didn't want to be a bother to them. I just lived my life like any other student and it all worked out. I go to school, finish my duties, go back home, do my homework and then play video games. Life was simple.

But just like a video game, Life has its fair share of plot twists when you least expect it.

I was on Discord and happened to step into a conversation regarding ancestry. My friends decided to splurge some money on an ancestry website where they had to send in samples to detect their ancestry and family tree details. I didn't plan on doing so but when they persuaded me to, I went on to give it a try.

I bought a package from their website and did as the instructions told me. I sent in my samplings and mailed the package back to the company that would be dealing with my information and ancestry. I can't lie and say I wasn't interested in the results, I wanted to know if there were some secrets. For example, I could be half-Scottish or I had a great grandparent from the coasts of Finland.

However, when I got the package back, I was severely disappointed. All that returned was a letter.

We are disappointed to tell you that despite the sufficient data you sent to us, we are unable to provide you with an ancestry list due to unknown circumstances. As a result, we've fully refunded your payment into your bank account. We apologize for the inconvenience."

I decided to tell my friends the news and they were just as disappointed when I said that my ancestry and past could not be dug further in. Things were starting to get weirder for me when one of my friends in the server private messaged me.

"Ashi, you said your parents were working at high-profile jobs, right?"

"I searched up your family name and nothing popped up. I even typed it in Japanese to get a better search but nothing came up."

I went onto my laptop and switched my language from English to Japanese, I typed in the kanji of my family name, and just like my friend said, nothing came up.

I was told my father was working in a well-known company site overseas and my mother was working as an ambassador for an unknown cause. For some reason, I never checked if it was true and just went along with it. I decided to see if my parent's names would grant me a search but when I looked at my birth certificate, their names were smudged out.

I then looked for my documents for when I bought the apartment under them but their names were also smudged out. Thinking back to it, I don't remember their names at all. I turned my head and stared at a picture of me when I was about seven and things started to feel fuzzy.

My head hurt and I feel as if there were parts of my memory that I couldn't remember. I remember experiencing it but I could not recall a single moment. It was already suspect that my parents didn't pop up in any search and it became even more baffling when I couldn't even remember my own parents' names and their details were being blanked out. To not be able to remember my years as a kid was even weirder.

I felt that something wasn't right. I have seen my parents face-to-face before and usually, it isn't that weird to not find your parents online. But since they were working high-profile jobs, I should be able to find them. That's when I realize that I was never told what company and cause my parents were exactly working for.

It was a long shot but I think I just realized something.

Right before I started senior high school, I came up with a brash conclusion.

"Just realized. My parents never specified who they're working for. They don't appear online despite working high-profile jobs. Their names are unidentifiable and my memory of my childhood is fuzzy. Add this to the fact the ancestry company couldn't provide me with my family tree..."

"I think my parents aren't who they are."

A conclusion that something was up with my family.

And it was something I knew I had to crack down on.