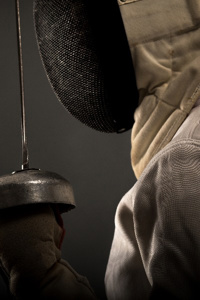 The Strongest Fencer Doesn’t Use Skills!

A world champion fencer is transported to another world and finds out that everyone can be a good swordsman with [Skills]. This offends him, as he feels it makes light of his hard work, and he sets out to see how far his own skills, the ones he earned through hard training, can stack up against [Skills].

This champion, Carr, seems to have other reasons for disliking [Skills] as well. Slowly, he begins to remember...

- Nerding out about fencing! (and the author knows their stuff, too)

Disregard the seemingly-gimmicky premise; this is good stuff. Well written, charming, funny, and god does the author get you care about fencing. I've read ahead of what's been posted so far on Royalroad on Spacebattles and it's just been getting better. The protagonist, in many ways, is the antithesis of a typical RoyalRoad LitRPG MC, and he's principled to the point of obsession in a way that's strangely compelling. The side characters are all interesting in there own ways, and all of them have just a tinge of madness to them that's reminiscent of Douglass Adams or Terry Pratchett.

The author doesn't really focus much on intricate worldbuilding or plots, but honestly? It's better without. In the end it's a story about fencing, and that shines through every aspect: the protagonist's obsession, the Skills, the setting, the intricately-structured fight scenes. Which are truly amazing. You can tell the personal experience of the author in each one, and the protagonist's almost lecturing narration during them is perfect.

Check it out, you'll do yourself a favor.

Reviewed at: Chapter 6 - A Forger, a Gambler, and a ship.

I've read this up to Chapter 16 on Spacebattles, and I have to say it really goes places. The story blasts you at the start with a hotblooded protagonist with an unflinching hatred of the LitRPG circumstances he finds himself in, and over time the layers of his seemingly irrational behavior are peeled back in a sequence of events that put the entire rest of the story into a greater context. I'm a huge fan of stories that end up being more than they appear at first glance, so this one was right up my alley.

Of course, an interesting plot structure can only carry a story so far, but thankfully Strongest Fencer is just plain fun and entertaining outside of that. The characters are very entertaining, the pacing is tight, and the fight scenes are clearly written by someone who has actual experience in fencing. Another thing I'm a sucker for is an underdog fight, where the main character is seemingly outclassed and wins through skill, bravado, and cunning. This can be hard to pull off without a deus ex machina, but the story manages to do that numerous times, which is impressive in its own right.

Really looking forward to where this one goes! It's started off strong and has a lot of potential to become something special.

A great story with a terrible title

The story is great, the fencing interspersed with musings on the sport in a fantasy world. If you love fencing, or are reasonably interested in it, you'll probably like this story. The worldbuilding is minimal to the point of absence. My one major complaint is about the title. It feels like a poor literal translation of a more graceful title in a different language, and at least on RR, I use that assumption as a shorthand for poor writing. That isn't at all the case here, as it is skillfully written.

Reviewed at: Chapter 13 - Other World

After constantly seeing this newer, shorter work on Trending right above or below mine, I couldn't resist procrastinating when I should be writing and sneaking a peek. Having disliked fencing in real life, I didn't think this would be my cup of tea, but I was soon swept up by the protagonist's enthusiasm, the ridiculous stakes, and the story's constant manic energy. So far the updates have been coming daily and the pacing hasn't slowed one bit. Overall, it really reminds me of an old-style manga or movie.

Carr's fevered rantings over the handsome blond-haired leader who betrayed him made me think of Guts going, "GRIFFITH!!!" even before the reappearance and flashback arc. RIP Kentaro Miura

The story's like a racing car on the highway: fast, furious, and straightforward. The world is somewhat limited (a world just for fencers?), the characters really come off as characters, which in my view is both a good and bad thing, and I did spot a few minor grammatical issues, but this earns my high rating from the stylishness, humor, and enjoyability factor.

Also, doesn't our battle in the Trending rankings feel sort of like a heart-pumping, blades-crossed duel? No, is that just me?

Reviewed at: Chapter 6 - A Forger, a Gambler, and a ship.

The story does an excellent job of being battle shonen-y, and delivers a consistently quality experience - from a nice flashback arc that gives more context on the hero's motivations, to interplay between the people in combat, to the way that he focuses in on the world and the implications to the things he cares about - from the nature of skills to how he stacks up against the magic of this world.
I don't have any complaints about the reading experience - the language is plain and understandable beyond specific segments that mention fencing terms that are well introduced, and the characters are likeable and easy to care about, though there was a feeling for me that the story cares about having central motivations and a speech style, so don't come here for character studies.
The fights are spectacular and engaging, and it has a great take for the genre. I wish that it was a bit clearer about the special effects of [Swordsmanship] and how it interacts with attempts to parry and so on - it seems like it's a little too easy at times, but it mantains the stakes nonetheless.
Still, I found the story personally exciting and thrilling to read, so I'm happy to rec it.

A comet of wacky

Reviewed at: Chapter 11 - Beyond the Bloody Match

The story, and main character, are definitely fast paced and crazy.

Honestly, the main character is just as stupidly obsessed with fencing as the people of this world are with [skills]. And frankly, I'm not sure he has a whole lot of moral superiority over them.

For example, in his second duel, he is perfectly fine with it being to the death, and perfectly fine just stabbing the opponent in the eye. Sure you could argue that the other guy had it coming, but the main character has to be pretty unhinged to come from a modern world where you fight with protective gear and be okay stabbing a guy in the skull for an honor duel based on his extreme anger that people in an entirely different world use [skills] to fight duels. Mysterious tragic backstory aside, I think he takes fencing a little too seriously.

Later he attacks this random merchant couple to steal their invitations to a party. Kind of a dick move, tbh.

Also, his sword breaks, so he needs a new sword, which is made by someone with a blacksmith [skill]. I feel like that's borderline relying on a [skill].

And he's completely a "charge straight ahead and screw the consequences," type. Conveniently he meets several people around him like that, so it works out, but it makes the pacing somewhat jarring.

You'll certainly learn some stuff about fencing, if you're interested. But this story gives me comet vibes: fast, kind of on fire, not sure if it's headed out to space or going to come crashing down to earth.

Edit: I think I understand a bit more about the main character now, that he is an unreliable narrator going through a manic phase that will catch up to him with consequences. This explains some of his unhinged and reckless actions.

Pure love for the sport, and promises even more

Reviewed at: Chapter 11 - Beyond the Bloody Match

With 11 chapters and, its hard to guarantee an ending as good as the beguinning. The pieces however, are all there

It is clear that the author loves fencing, making the fights fun, but also you feel like you learn a lot about fencing and its quite cool? Like hell yeah teach me how to stab people.

That same love for the sport is clear in Carr, a fencer from Earth who hates this world ruled by numbers, and is here to show what true fencing looks like.

Also that antagonist... He has just appeared in front of Carr and I already want to know more about him, for him to get stabbed and the answer to a few questions that are spoilers by themselves ;)

Well written, characters with coherent motivations (both the main and supporting cast), and with the originality of fencing giving a freshness to fights that I didnt know I wanted, this story receives my glowing recomendation

One of the best Isekai's I have ever read! The flow is great and spelling mistakes are minimal. There are very complex characters who sound real without too much character development. The relationships between the characters also seem very real and complex, with ups and downs. It is also a very original take on the isekai genre, with a modern swordsman being transported.

Grammar is good
world building is good
char development could use a bit of work
but the plot, is soo forced , i mean its entertaining, but soo illogical and like stuff just pops out of no where and the MC just randomly decides to do shiz. And its not even funny how forced the plot is

I came here from Reddit. This series is excellently written. The premise and plot are incredibly compelling and it's just a great read, even for people like me that know nothing about fencing. This series is like one of those books you can't put down until you finish it. The fights are also incredibly satisfying and interesting and the techniques shown are pretty well-described and easy to look up if you need a visual. It's great watching Carr educate people and show that numbers aren't everything. I look forward to seeing where the story goes.