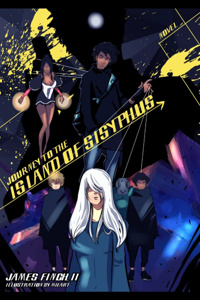 Journey to the Island of Sisyphus

The picnic basket floats, ignoring gravity, behind the large man walking in a bright blue tank top, black shorts, and loud brown sandals. According to the notecard the basket belongs to him. He must be telekinetic.

Walking is the wrong word. He’s so excited he switches between floating and walking on his way into the amusement park. He dodges a car looking for a spot in the parking lot. The lady driving the car apologizes to him with a wave. He waves back and smiles. The smile that friendly grocery store owners and librarians have.

It’s so loud I can’t hear myself mumble my lines on the notecards. The smell of sunscreen hits my nose as teenagers and families skip past me to get to the gate of the park. Barely noticing me... so far.

Uuuggghhh do it, man. It’s a prank. This can’t be real.

I block the path of the large man with sandals and bring out the first notecard.

I pause and let the blue-skinned family walk out of hearing range.

“You know what you’re here for. Here’s your one chance to correct it. Leave your picnic basket immediately and swear by your own name to never do it again. Any other response results in your death.” I ran through that, hope he heard.

I don’t look at him, I just read the next notecard in my head.

“Excuse me! You’re getting me confused with someone else,” he says, quoting what’s on my notecard... verbatim. He’s rose-red now and lowers his voice to an angry whisper. Don’t look at him, just read the next card.

“You’re going inside that park to meet with a twelve-year-old girl.”

I brace myself for a punch, I’m a wimp and I’d punch me for saying that. But I keep my eyes open because I know what’s in the cards and a punch isn’t. My friends can’t fake what’s supposed to happen in this next card though.

The verbatim quotes continue. “I would never.”

Sweating, shaking, he stumbles backwards. He stares at me like I’m the Grim Reaper. I want to tell him about the car approaching behind him but that’s not in the cards.

SCREECHH The tires scream trying to avoid him. But the damage has been done; the car hit him and his skull is cracked open on the concrete.

I want to follow the masses. They swarm toward him to see if he’s okay, but I obey the notecard.

“Look in his fallen picnic basket and grab a ticket and use it to go into Free Fall Park,” the card says.

Both tickets are there.

This is real, so I can’t keep doing this. Think of the last kid.

Every day that kid will cry “Why me, what did I do to deserve this?”

I’m going to be his why.

Well, I could just not do it.

And live my life in my mother’s windowless basement forever?

No, I’ll do it. Besides, this isn’t real. I’m being set up for a prank. Notecards can’t tell you how to control the future. It’s just how the guys can get me to show up IRL. An expensive prank for a bunch of gamers. A month’s worth of my salary to take the day off and do this. Am I worth the effort? I catch my reflection on the back of a woman with golden hair and silver skin. Alright, God, or whoever left me these notecards, I get it. Maybe I’m not worth the effort.