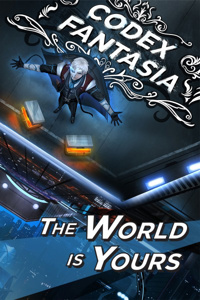 Codex Fantasia: The World Is Yours

Ivan fell over the city, still spinning, his eyes screwed shut against the rushing wind. Time always seemed to slow down when you jumped, or maybe it just felt that way after so much practice trying to cram more revolutions into the same few milliseconds. Back in his competition days, he’d had his quadruple jumps, though he’d rarely had occasion to break them out after the scandal.

When he’d adapted bladedancing for urban mobility, jumps became a matter of practicality rather than a display of athletic prowess. You could use them to mitigate the pull of gravity as you fell, as long as you entered the jump with the correct form. Done properly, you could fall twenty stories - like he was now - and land safely, with enough control to transition into other moves.

But he didn’t just need to land. He needed to escape.

He’d never tried anything like this in Nocturnov, where his unconventional bladedancing tricks had been enough to stay two steps ahead of the politski. But he’d seen the city itself rise against him in Halcyon. No doubt the Enforcer would continue chasing him on the ground, and it would be all too easy for police to corner him on foot. He forced his eyes open, taking in the view of Halcyon in a panoramic sweep, its bizarre, beautiful geometries, its wrong-angled streets and inverted city blocks.

The spin was self-sustaining at this point, drawing gravity’s pull into itself and converting it into endless rotational force. He turned that momentum into backward motion as he landed on the back of his right blade, gliding along the side of an elevated highway. Cars zoomed by at a right angle beneath him, but he kept his eyes on the wall he was on. Moving at this velocity, his body a sharp vector slicing through the air, he was his own frame of reference.

The world pulled into sharp focus around him as he turned and maneuvered on the highway, traffic circulating above and around him. Moving through a series of crossovers to keep his momentum up, he surveyed the network of flyovers and overpasses that the highway he was on ran through. If he switched to the Arterial Expressway, he could make it to Leigang off one of the exits, though he couldn’t recall which one exactly. He was about to pull out his phone to check when an Enforcer erupted from the wall ahead of him.

He banked sharply, grinding on the metal railing to bypass the Enforcer as it swiped at him. This wasn’t the same Enforcer - its features were vaguely feminine, and it was mostly composed of tinted crystal, its scalp covered in long black cables reminiscent of hair. It reared back and threw a punch at him, its hand detaching to fly through the air. He leaned backwards as the metallic claw shot past him, the chains connecting it to the Enforcer’s forearm clinking.

The Enforcer moved through the concrete wall as if wading through water, with only its upper body exposed. Oddly, its hair-cables drooped sideways, and its hand fell to the side as it retracted - apparently it was still subject to local gravity, unlike him. He shifted back to the wall as the Enforcer thrust both arms outwards, chain-hands lashing out in a wide arc to ensnare him. As the chains whipped towards him, he pivoted on his left blade so he was facing away from the Enforcer and kicked upwards with his right leg, sending himself spinning off the highway.

He landed on the underside of the Arterial Expressway, only to hear a heavy crash coming from behind him. Skating backwards, he turned to see the Enforcer hurtling through the air, its chain-hand embedded in the concrete. It swung towards him like an ape swinging through vines, shooting its hands into the expressway and retracting them like grappling hooks. Alarmingly, it was covering a lot more ground than he was. He couldn’t let it catch up.

Ivan dropped into a lunge and drew the gun as the Enforcer approached. He sighted carefully as the Enforcer’s claw hit the bottom of the expressway, aiming for the joint where chain connected to hand, and fired three times. The joint sparked, warped - then snapped. The Enforcer swung backwards, but brought its injured arm around again, whipping the clawless chain sideways to curl around one of the expressway’s support pillars, giving it the anchor it needed to continue advancing on him.

As it did, however, it seemed to momentarily lose sight of him, looking around as though distracted by something. Ivan watched its eyes dart back and forth, realizing that it was tracking the spent bullet casings spinning in the air. Interesting. They were policing constructs, after all, and each bullet was contraband, a potential piece of evidence. It lost interest in them as they fell out of its field of vision, and renewed its pursuit of him.

Thankfully, there was an exit coming up. He didn’t much care where it led, just that it got him out of here. Jumping off the overpass, he soared through the air, sculpting his trajectory so that he landed on the top of an apartment building. He immediately had to throw himself into a spread eagle position to squeeze between two large air-conditioning units, arching his back inwards to account for the backpack.

A tell-tale rattling of chains came from not too far behind Ivan, and he knew he didn’t have long until the Enforcer was on his tail again. Residential areas in Halcyon generally followed the same design - blocks of apartment buildings clustered around a central market area for shopping, dining and transport. As the sound of clinking metal grew louder, he found what he was looking for, and jumped.

Ivan spun in a wide arc over the apartment buildings, letting the gun, and the bullets he’d unloaded from it, scatter in every direction to fall wherever they would, bouncing into drains, rolling over rooftops, even flying into open windows. Landing on the side of a building, he snatched a hoodie from one of the bamboo poles locals used to air their laundry as he passed, bundling it into his arms.

He came down in an empty courtyard, and disengaged his blades. The mask came off and into his pocket, and the backpack went from back to front, giving the impression of a paunch once its straps were loosened and the hoodie was zipped around it. Pulling the hood over his hair, he slouched around his fake belly and stuffed his hands in his pockets, then shuffled into the market.

Enforcers swarmed the area behind him, scouring it for the tantalizing bits of contraband he’d left for them to find. One stalked through the market, a monolith of red brick that surveyed the crowd with crystal quartz eyes, spewing the gray gas that lulled Halcyonites into normalcy and routine. This time, he made no effort to avoid it, walking straight past as though he didn’t even notice it. Nor did it notice him. And why would it? After all, he was no one, really. Just another face in the crowd, a civilian going about his business.

He didn’t let himself smile until he was on the bus to Leigang, and even that he hid safely behind his mask.