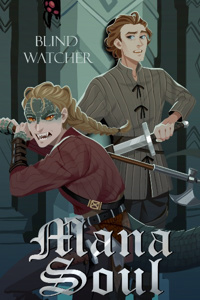 Like many others across the multiverse, Markus was chosen as this world's hero to fight against the steadily approaching cataclysm. Only, something went horribly wrong. Left with only a handful of memories, Markus has spent years clawing his way up from poverty and officially registered as an adventurer to try and make his fortune. Unfortunately, Artificers are the least combat-capable class of the four classes, and Markus has no connections to join an established party. With the fate of countless worlds hanging in the balance, a chance meeting will determine the course of a war nearly as old as reality itself.

The story will bounce predominantly back and forth between the primary protagonists every couple of chapters. The time stream is linear, so events are not revisted/rehashed/retold through the narrative format. Characters may comment on something that has occurred, but that's different. Just giving a heads up.

Chapters will be around 5-9k and updated 1/week on the same schedule as my other story Ogre Tyrant over the weekend.

A good story that lets you choose how to read

I've revised this review after a few changes and rereading the story thus far.

The good. I'm a fan of the author's other work so far. They know how to tell a good story, stay within their own world's rules, and while they could probably use an editor the grammar issues aren't that bad. Here as well they seem to be building whole world cohesively but are successfully avoiding info dumps while still feeding us a constant flow of setting information, and having it feel natural! This is difficult to pull off but they do it. And it seems like they're building a story the same way which should be really interesting to read.  The chapters are very long, expect 2-3 times what you'd normally see on this site, so while the projected release speed may seem slow the content levels should be comparable. And personally I prefer larger and less frequent bust since it makes it a lot easier to stay in the story.

The Bad, has largely been solved from my first read. My issue was that the form of narration combined with the enforced language barrier made it hard to understand what was happening. The narration is through first person, and is reliable only to their experience. The language barrier was requiring separate translation if you wanted to understand much of the rest of what was said. However the author has since added the translations in spoiler tags, so the reader can choose if they want a more complete picture of events or to follow along with the character's limited understanding of what's happening. This has made the story much easier to read and I hope people will give it a try. Things seem to be going a little too smoothly for the MC, but there are also numerous problems on the horizon which could show current events a temporary lull in action. That's about the worst I could say, and since I'm enjoying it still that's not much of a negative.

Reviewed at: Chapter 08 - The Predator - Aela

I've only read 7 chapters so far.  The first few almost turned me off, as the MC is non-typical, in an a-typical situation, and there is no introduction: the author just jumps right in.  (not a criticism! the author just chose this method and I think it works for him, as he slowly begins to unravel WHY the MC is like that.  This unraveling is only beginningin the first 7 chapters).

However, due to the lack of mitigating factors (due to the lack of any sort of intro [again, I'm not saying it should be added, just explaining my reaction]), I had little patience or benevolence towards the apparently (and unexplainably) incompentent, cowardly MC.

I strongly recommend continuing through the first few chapters, as this is a ploy by the author and, it seems to me, the MC will not be like that through the whole novel.

Beyond the initial impression, it is a darn good read, very original and the author slowly paints the world and the characters stroke by stroke, which I prefer to the massive expositions with explanations that I have seen other authors use.

Can't think much more to share; hopefully other reviewers will fill in gaps in my review.

I just binge-read the first 12 chapters.

I'm enjoying the story and looking forward to the rest of it.  So far the author has used three different perspectives.  The human MC has lost all conscious access to memories more than five years old, there is a mixed race female character and the third perspective to date is a small golem he fashions as as a learning experience while trying to figure out how to make prosthetics.

Just my non-spoiler thoughts so far.

I adore all the characters in this story so much. Many of them feel well fleshed out and like I understand them. Even when they are simple their actions make sense. I hope we get to see more of the magic system as it is only being hinted at what it can do and the sort of scope we are dealing with. Otherwise I'm really enjoy what is being explained. I'm really enjoying the a lot of the plot threads being introduced and the different implications they may have. Overall I would recommend this to most people

Now for my only real critic or rather least appealing element; I don't really care for the heavy enphasis on racism and/or bigotry in the story. This is mostly just a me thing but I have found it a bit distracting so I hope if it conitues that it plays a more nuanced role in the established plot threads. For me fantasy racism for the sake of fantasy racism is kind of unnecessary unless used with care. Just be careful not to get too heavy handed and I think it can work within the story.

Can't wait to see where this story goes. P.S I think the use of languages has been pretty fun.

Weird, in a good way.

Reviewed at: Chapter 13 - The Meeting - Markus

Similar to the author's other series here on RR, Mana Soul has some weird story choices and directions for character development that I haven't seen much on RR, which is nice to see.

I also really like how the author portrays different characters and isn't afraid of leaning hard into a trope only to later reveal the unexpected depth of the character. Even side characters feal real in the sense that have established personalities beyond the scope of what is written in any given scene.

There are a couple of times where the writing is a little hammy, but from what I can tell from the other series, it is most likely due to events that haven't quite been revealed yet to provide context. The isekai tag seems to be a core plot component for one of the two primary protagonists and makes certain events farm more itneresting when viewed through that perspective.

The use of French and German in the earliest chapters is admittedly a little offputting, but appears to be a very deliberate choice by the author to not only represent more clunky dialogue exchanges due to the language barrier, but also to continue building towards the elusive Isekai tag.

Grammar on the non french and german sections has been great. The author seems to check the comment sections regularly and take suggested edits into consideration as well. He does the same for his other series too.

Lastly, I personally love the relatively high word counts for each chapter. Even though they aren't quite as long as the author's other series, they are still generally 3-4 times longer than most stories you find on RR.

Definitely worth a read.

Whats a nice guy doing in a place like that?

It seems like Markus is building a better world over the old corrupt one, helping the downtrodden and dispossessed  along the way. What a nice guy. Or is he? Not so nice to the petty and cruel. The mc the isnt the typical strong armed hero but he does have some unique talents he brings to the party. Even he isnt sure how nice he is even while those around him get all the advantages of his talents and generous nature. Or is it something from his hidden past urging him on? Im sure he must be making enemies amongst the nobles.

There stilI seems to be a lot more hidden than has been revealed.

I think something big must be building and Im looking forward to reading how it all unfolds. Maybe less of an unfolding and more likely something cataclysmic? Not a spoiler - its in the author's synopsis.

Great slow burning story arcs overall with multiple interesting points of view from the multidimensional main characters, with even subcharacters you care about and want to know about.

Although I wasn't  a big fan initially of the whole language thing, it was reworked and I like the spoilers. Going on through the chapters there is a lot less of it.

I like the longer chapters that let you settle down for a good read. I started with the authors other book Ogre Tyrant which has even longer chapters.

There are a few typos and grammatical errors here and there but i havent read a story here without them yet.
Keep the chapters coming!

Reviewed at: Chapter 08 - The Predator - Aela

Writing is good, story is good so far, world building is solid, characters have great personality and feel real. Negatives why do you write in different languages and put the translation as a spoiler? I get you want to let the reader know they aren't speaking the same language but if I need to translate a story youv committed the sin of breaking the reader out of emersion every other sentence. Make it a different color or something not straight German or french.