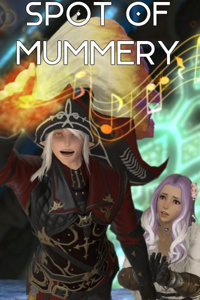 -Webfiction/RolePlay set in the FFXIV MMORPG world of Hydaelyn-

In ancient times, Amon was an infamous, immortal Technologist - one of the legends of the late Allagan Empire. However, when calamity strikes his civilization, he's forced to place himself and the remaining Allagans into a time-locked sleep in order to survive.

Fast forward many ages later when Amon and his people awaken once more. The world has drastically changed, and his kind is now deemed a threat. The heroic Alliance responded by sending a raid to eradicate the last Allagans, where Amon was ultimately defeated ...or so the world thought.

Through his ingenuity and aetheric technology, Amon manged to cheat death. Only, things didn't quite work out the way he planned.

Stripped of his magic and technological resources, Amon now takes on the guise of a bard as he struggles to build a new life in a time long after the fall of his empire. But, should the people of this modern time discover who Amon once was, he fears they would put an end to the bard technologist's tale.

I've been writing Spot of Mummery since 2018, so there's quite a backlog of story to post! This story was also written before the changes made to lore released in the Endwalker expansion (December 2021). I will address these changes eventually, but only in later chapters - ones written after the expansion came out.

I hope that you enjoy and look forward to hearing your thoughts! Interested in seeing more about Amon?