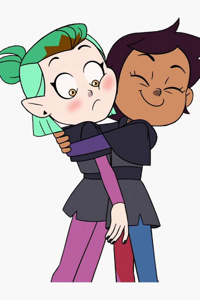 Luz Noceda is powerful, but the average person wouldn't believe it, not until she helped free The Owl Lady at least. But there's been a reason for that. After all, small balls of light and the odd flower or two aren't exactly impressive, especially when she usually only has such small sigils on hand at any given time. So how. How did she manage it? She even got the jump on Emperor Belos himself, something even the most experienced of mages would have no chance of doing. Lilith wants an answer and she even has a theory for how to make the boost stick if she's right.

Now if only her sister could explain to her why Luz, who seems to be ready to leap into almost anything, won't leap into love.

Fanfiction of The Owl House

Daily posts until it's caught up to Ao3.

Written between seasons 1 and 2 and no, I'm not editing EVERYTHING that would be needed to fix the inconsistencies.