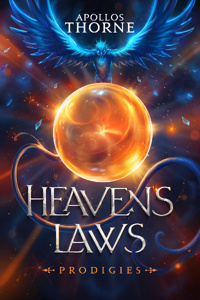 On the hunt for a rare beast core that will help her become the youngest cultivator to break into the sky realm in Monolith continent’s history, Xiao Huifen is ambushed by a monstrous dire beast that shouldn’t even exist in the Redwood Aurora region. Forced to flee, she soon finds herself running low on energy and is faced with certain death. A voice calls out to her.

She turns toward it, scurrying after her last glimmer of hope. A young man steps out from behind a tree with a cultivation a full realm lower than her own. She quickly decides to try to save the courageous fool when he commands the wind with the swipe of a hand, pushing her out of the way, and stands to face the dire beast alone.

What she witnesses from the boy with his low cultivation and weak physique, defies everything she thought she knew.

Note: This book is already written and being edited. It will be heading for Kindle Unlimited so it will only be up for a limited time.

All rights reserved. This book or any portion thereof may not be reproduced or used in any manner whatsoever without the express written permission of the publisher except for the use of brief quotations in a book review.

This book takes on the evils of sexual assault. There is no sexual content or instances of abuse. No graphic content. Nothing is shown, explicitly or otherwise. The author has gone to great lengths to handle it in a mature and respectful manner, but it may be troubling for some readers. Discretion is advised.

Wuxia that does not gloss over the little things

So far the story has been engaging featuring a slowly maturing boy that is struggling to come to terms with his  aspirations, crush and  trying to impress his dad. The usual stuff, it's pretty much a teenager exploring options just wuxia style, dunno why that pisses off many reviewers.

The chemistry between the MC and his Senior Sister is an ouce of mutual attraction, a pound of indecisiveness and a sprinkle of shyness.

A point of critique in terms of character profile of the Senior Sister is her near phycotic obsession with higher cultivation realms that is not rooted with any reason. It's like she's expected to cultivate so she does but doesn't quite enjoy it in comparison to the MC with his chunni universal laws. It's quite a common wuxia character flaw that I didn't expect to pop up in this place.

As if peak of the world has any allure to a sheltered girl with emotional immaturity, she's pretty much cultivating for her pride and to not be be belittled. Moxy issues.....

Having tried the author's other offerings on Amazon I was a little reluctant to read this one. I didn't like those at all but I'm enjoying this even though the MC is so underwhelming at times that I fear that he will drag the story down. The romance angle is awkward and given the huge difference in levels between the MC and his love interest unless he gets a huge cheat ability (which I expect he just did in the current chapter) there is no future for them. If there was only a realm difference in levels it might be believable but that's not the case at all. That said the story is of higher quality than most on RR, posted regularly, and engaging enough that I recommend you read it if you are a (Western) cultivation fan.

Straight up I loved this thing so far.  Two perspectives, I mean we can go ahead and call that there will be a romance but now its more like a perfectly done mentor/friendship.  Truthfully im almost mad i found this now and not 300 chapters in.  I spent the whole damn day reading this thing.  I almost didn't have dinner done before the wife got home.

So for those just randomly popping around like alot of us on this site this author wrote the series Underworld:level up or die which i imagine a few will recongize. That being said this is a entierly differnt genre and alot of author cant make that change he has.  Gave the story 4 stars for the moment but thats only cause its not finished so far at CH 32 this story seems to be the set up for a series and is fun to read and not super tropey like alot of xiania novels can be on this site mildly tropy at worst. My wallet cries ahead of time since ill probably be buying this series as well.

The biggest turn-off in this story is how beta and submissive the MC is (especially in romance, but also more generally).

The romance is terrible.  There is no passion, nor will there ever be.  The union of MC + GF will always be about boring practical benefits and endless awkwardness.  The MC is so far below his GF that one cannot even come close to calling them equals.  She is the dominant top and he is the submissive bottom in the pair by a factor of over 9000.

Although the MC tries to present himself as a moral individual, he is actually just focused on magic research for magic research's sake, personal power and reaching the apex - although for even more pathetic reasons than usual (ie: just to get a similarly self-centered and largely amoral woman).

How gross to watch a lame, submissive and down-trodden man slowly learn to murder and like murder.  And what is there to be attracted to in the GF?  She is socially awkward with massively repressed emotions (aka 'ice queen') and would be a terribly boring GF to be with and an even worse mother to children.

That being said, some of the rest was fairly well done earlier on.  The magic laws are neat (although it gets tiresome to focus so much on them without sufficient adversity present, most of the time).  I liked the adversity that was present when the MC first joined his sect, but since then it has been extremely dull.  So much boring talk between boring, awkward people, and just more advancement in cultivation and creepy 'romance'.

I don't think I can read any more of this, in spite of my own boredom currently.