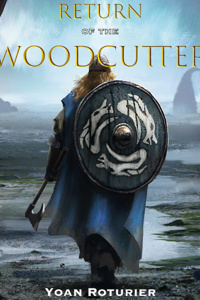 Return of the Woodcutter [A Fantasy LITRPG]

Iris, a foreign world engulfed in war, direly needs help. To replenish their troops and fight off horrors from the worst nightmares, the gods resurrect and summon living beings from another world: Earth.

Aito Walker, a broken man, is one such ordinary being amongst many others. Upon his revival, he will be put to the test during deadly trials.

He will start with almost nothing. No overpowered magic, no cheat skills, no-nonsense divine armors, no godly weapons. Only a peculiar system, increased strength and his wits as the best weapon.

Bearing a sin—he could not, cannot, and will not forget—haunting him to this day, Aito will strive to regain what little honor he has left.

He will suffer. He will fail. Taking advantage of his weaknesses, pain, anguish, sorrow and fear will gnaw at his sanity. But a powerful yearning will keep him from falling apart. An ever-burning flame melting away the despair and welding back the broken pieces of courage.

“I will find redemption no matter the cost.”

Or not hun? Who knows the story isn't over ye—

"Who put that guy in the synopsis narration? Get him out of here and launch the warnings!"

1) It's a weak to strong story and the MC can be considered an Anti-Hero at some point.

2) There are contents about the MC's background story that can be hard to digest. But, to me, those are necessary for the MC to progress in more ways than one.

4) There are traumatizing and gore contents. Some parts of the story will become darker the more we delve into it.

Have a Taste of my Review!

TL;DR version - A well-told, violence-filled, LitRPG second chance story. Read it if you can tolerate a little imperfect grammar.

Regular version - Aito is a dead man with lots of mental baggage left over from his now lost life. Filled with regrets and seeking some kind of redemption, he dives into his new lease on life with recklessly violent abandon. Fortunately for him, the tutorial he finds himself in rewards lethal violence above all else.

In some ways, the story so far has a flavor similar to a LitRPG version of Robinson Crusoe. We get plenty of time and space to understand Aito in his limited living situation. However, as a result of his isolation, the larger world-building is somewhat sparse thus far. For instance, nearly 200 pages in, and we've yet to set foot on Iris because he is still in his first trial. However, I don't find it boring. But I consider the story so far to be more about establishing Aito as a character rather than moving the plot forward.

The story is engaging and well-told. However, the technical aspects of the writing can sometimes be a hindrance. Grammar is the biggest culprit on that point, but it was not bad enough to keep me from enjoying the story. On the plus side, the author is very engaged with reasonable feedback and is willing to go above and beyond to improve the story. That positive attitude and drive to improve should only take this story to even greater heights.

I only made it 6 chapters. 6 chapters with about 5 p.o.v. changes, most of which don't advance the plot. If there even is one.

So far we have an isekai tutorial. M.c. takes the hardest difficulty that frankly, isn't hard at all. Bit of a joke honestly.

The whole alcohol withdrawals make no sense. 2nd life can cure you of whatever disease you had, and death, but can't cure addiction.

There's some typos here and there, most noticeably in the first chapter. Probably not enough to detract you from reading, but worth mentioning.

- mc getting over trauma, it really felt rushed and forced for the sake of plot progression; it's implied that he ran from his troubles and trauma for years but he accepts all that instantly when faced with certain death and a dying friend. again not impossible but it just felt lazy.

I'll continue reading but it'll all be tinted in frustartion colored glasses.

I've heard some talk about bad grammer, but I've not really noticed any. I'm a native english speaker, but I'm also dyslexic so maybe that's got something to do with it lmao.
You can probably tell by the cover the meta the MC has, which, imo, doesn't get represented enough in RR, it's all mages or swordsmasters, gotta get a lil axe action in there.

There are no glaring plot holes that I've seen, and I'm looking forward to see what happens after the trials are done, my only real critique is a minor one, but it felt to me like the author used the latter half of one chapter to vent a bit about internet trolls, but that's only happened once, on one part of one chapter, so it's by no means a deal breaker for me.