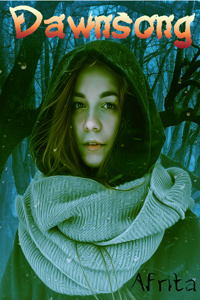 Chapter 39: Meeting with an alchemist

When she heard Yasema entering the house once more, Dawn closed her books and stowed them away in her storage ring. Her head was hammering now and she knew she needed some time to relax. Mindful of her planned meeting with Aaron the alchemist, she cleaned herself up and chose to wear her best dress. It was made of soft green wool in the colour of her eyes, fell down to her ankles and had bell-like sleeves. Cream coloured embroidery flowed around the neckline. She carefully combed her hair and braided it in a long plait down her back. Then she went downstairs to show herself to Yasema.

Yasema looked up when she came down and said: “Oh, what a beautiful dress.” She approached Dawn and looked her over from all sides. “That dress truly is a thing of beauty. Did you make it yourself?”
Dawn smiled. “No, I have no great talent for needlework. My mother made the dress. She wove the fabric herself and coloured it, made the dress and did the embroidery. She gave it to me as a present for the last longest night festival.”
“She is an artist, then. But you really need a different hairstyle for your meeting. That braid makes you look like a little girl.”
Saying that, she promptly fetched a comb, started to loosen Dawn’s long black hair and braided it again in a crown all around her head. Then she gave Dawn a critical once-over and nodded, satisfied. “That’s better.”

Dawn sat down at the table as Yasema started the meal preparations for dinner. She would have liked to help but didn’t dare, afraid of staining her dress before the meeting. After thinking for a moment, she took the alchemy books out of her storage ring, wrapped them carefully in a clean piece of fabric and tied the bundle up with a cord. She took off her storage ring and put it into her dress pocket. Now she was as prepared as she could be and only had to await the rangers.

The evening bells started to ring throughout the city. Grinna and Teren arrived at the house shortly after and went upstairs to wash and change.
“Ready?” Grinna asked when she reappeared in a neat dark blue dress.
“Yes, but I’m a bit nervous to meet that man.” Dawn answered.
“There’s no reason to be nervous,” Grinna smiled at her mischievously. “Either he buys the books or he doesn’t. In any case you won’t be worse off than you are now.” Teren, who was wearing black trousers and a light grey shirt, added. “And we will accompany you, so you’re not alone.”

They left the house and wound their way through the stone paved streets of Atelang. The street they followed lead up the hill and the houses to both sides slowly started to get larger and more ostentatious. The farther they came, the more the pedestrians thinned out. The streets were almost empty now. Finally, they needed to pass through a gate in a tower, that obviously separated the part of Atelang where the rich and the noble people lived from the rest. They were passing high walls to both sides now, interrupted only by massive gates from time to time. Behind those walls lay the mansions and estates of the higher class, but there was nothing to see from the street but blank walls. Those people obviously valued their privacy.

At last they arrived at a massive wooden gate with brass fittings and a round brass door knocker in the shape of a serpent eating its own tail. Dawn felt intimidated by the gate alone, but Grinna, always dauntless, stepped right up and gave a few knocks. Almost immediately, a small window in the gate popped open and a young man, obviously the doorman, asked for their names.

They were ushered into the house, accompanied on the way by a boy in red and black livery. Dawn was looking left and right as they made their way from the gate to the entry of the mansion. Lush gardens sprawled there, blooming riotously, pervaded by gravel paths and decorated with white marble sculptures of men and women.
They trailed through the house after the boy and entered a large room lined with ceiling-high shelves filled with books. Behind a massive wooden desk in a corner of the room sat a man of maybe thirty years, with wavy reddish brown hair and striking amber eyes. He had a very clean cut, attractive face and stood up to greet them cordially. When they all had introduced themselves, Aaron offered them seats before his desk and mustered Dawn intensely. She became flustered under his scrutiny, and her headache, which had subsided during the walk through the city, reestablished itself. She felt relieved when Aaron finally started to talk, as if an unseen pressure had been lifted off her.

“I have heard a lot of rumors during the last days, regarding this newly discovered ancient city. My father is Reis Artor Mallem. He has a seat on the city council and is responsible for the gathering of information. Therefore, we may be better informed than most people in Atelang, or at least I’d like to believe so. But I never heard of this city of Raknavor before. When it came to my attention that someone had brought books out of the city, I immediately wanted to see them. But, excuse me if I say so Dawn, you seem a bit young to go out and discover ancient cities on your own.”
Dawn had to smile at that. Aaron’s charm set her at ease and she didn’t find it difficult to talk to him. “You could say that discovering the city fell more under the heading of an accident. It certainly wasn’t my intention. I entered some caves and happened upon a passage into the mountain that led me to the underground city. Unfortunately, I got lost along the way and had to find a new way out. Which, among other things, led to me discovering an old alchemy laboratory in the caves of the city. Most of the books there were already destroyed, it had obviously been abandoned for a very long time. But a few of them were still intact and those I took with me. As far as I could make out, they seem to deal with alchemy and that is consistent with the laboratory I got them from. Obviously, I can’t use them, but I just couldn’t leave the books behind.”
“Of course, you couldn’t.” Aaron agreed emphatically. “The thought of such ancient knowledge, available again after possibly centuries, is breathtaking.”

Dawn nodded and set the bundle of books down on Aaron’s desk. “That’s what I thought. These are the books, here.”
Aaron freed the books from their wrappings and looked at the three tomes almost reverently. He took his time, picking up each tome and examining it intently. Finally, he opened the first book and started to carefully thumb through the pages. He muttered. “These urgently need to be copied. They are readable but obviously very fragile. Storage conditions must have been too humid.” He occupied himself with the tomes for some time. Dawn and the rangers were waiting more or less patiently.

In the end, Grinna cleared her throat pointedly and Aaron looked up astonished. “Oh, forgive me, I tend to loose myself in books sometimes. Of course you want to conclude the business.”
He admitted frankly, “I have to say, it is difficult to fix a monetary value on these books. In some ways, they are priceless. Especially if one takes into account their provenance from the ancient city of a practically lost civilization. There are some sources from the stoneblood folk which have been preserved, though their authenticity has always been a bone of contention among scholars.” He looked at the books on his desk with naked longing.
“I’m prepared to offer you six gold for the books. As I said, I can’t state with certainty that it is their actual value, but if you want them to be appraised it could take months for a value to be determined.”

When he stated the sum he was offering for the books, even the mostly unflappable Grinna was obviously taken aback. When Dawn took a moment to calculate the amount in silver and compare it to the salary of the ranger, she could easily understand her amazement. She would earn the equivalent of five years of a rangers salary just by selling three books.
Without waiting for any further indications from the rangers, Dawn said: “I’m perfectly content selling you the books at that price. I’m glad they find a new home with someone who so obviously cares for them.”

Aaron smiled at her, stood up and said: “In that case, let’s shake on it.” He offered her his hand and Dawn took it, slightly astonished. When he gripped her hand, Dawn’s headache flared up viciously, she squinted her eyes against the pain and was taken aback to receive a message.