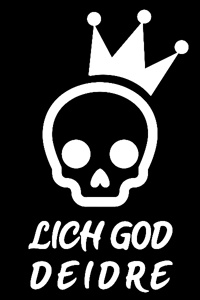 I took a big whiff of the frigid morning air. Despite the overcast grays looming in the skies, the morning was a beautiful one that soothed the soul at the sight of the picturesque landscape over yonder. Was it just me, or was Reuland becoming a little chilly? I meandered into my lush, colorful gardens. Taking a relaxing stroll once in a while always calmed my bipolar nerves and gave rest to an anxiety that felt like it superseded my very existence.

The tweeting birds stole Tina’s attention. She brushed some hair behind an ear and gazed lovingly at the birds dancing back and forth on some vines growing from neglect. “Why, Deidre? Why would you go so far?”

The inner reaches of my mind distorted for a few seconds upon hearing her question. Confronting the demon king? It was never my intention. Just the sound of it made me feel to retch, on the inside I was just a basic bitch. No, even they still put through effort and faced their issues head-on. I on the other hand, just kind of, ran away from life. I didn’t have the balls, not like other people. So, I convinced myself that a quiet life with my brother would be enough, but it wasn’t. Otherwise, I wouldn’t be feeling regret for the way I lived my past life.

I wanted what other people had because their happiness felt surreal. They would laugh and smile, hurt and cry, but they would surely die with far fewer regrets that I had. Now that I had a second chance, I tried to make up for what I felt deprived of before. And somehow, one little decision after another, I wound up in the position of facing the king of a nation of demons.

I patted myself on the back. Good job, Deidre. This is great! Tina’s eyes bore holes through me the longer I took. “I do this because I don’t want to die with regrets,” I said. Or live with them, I guess. I was an immortal being after all. The tension I felt from my actions and the expectations I expected from myself were hurdles I couldn’t even see the top of. My trembling hands sought out hers. “Thank you, for being with me. I don’t know how things will turn out, but I would never have made it this far without you.”

Later that morning, the swelled skies finally burst and Nemus was having a torrential downpour. I continued on with the directions given to me by Lilith and approached the northern end of Nemus to get to Demon King Fyren. The city he resided in wasn’t as populated as I first believed, but boy was it magnificent. Despite the dark and devilish designs of their towers, the city was the closest thing in this world to a modern city.

Dreadhoof flew me farther north, to the mountains. Just as Lilith described, there was an unsuspecting tower, much smaller compared to the skyscrapers in the city, that resided close to the mountains. Its bright green exterior was unmistakable.

Despite its modest size, the number of guards there was no joke. Dreadhoof landed atop the stairs and I peered down at the seas of spiked black towers jutting up, nearly reaching eye-level. I removed my stealth spells at that point and the guards quickly spotted me. However, they gestured for me to enter the large white wooden double-doors. So, he’s expecting me.

Inside was a cozy little fire in the foyer, a staircase leading upstairs, a few chairs around the fire with a little table in the middle of it. Most of the interior was wooden, which gave a much homier feel than I expected. In fact, this place didn’t feel like somewhere a demon king would reside. Was this a trap?

Footsteps encroached, every thud injecting my curiosity with steroids. My head whipped around and I found that a demon in all his maliciousness was leisurely making his way down the stairs. He wore a pleasant smile on his face, and a rather familiar white robe. “I’ve been expecting you, lich. Perhaps not so soon, but I knew this day would come.” He pointed with an open palm towards one of the chairs in front of the fireplace. “Come, let us sit.”

I nodded and took his offer. The wooden chair creaked just a bit, but the beaten cushions felt comfortable. “I didn’t think you were the demon king.”

His deadened grunt sounded. “I didn’t think a monster would have Shadowsiphon, nor two great demon clans under its boot.” His curled horn somehow wasn’t as imposing, and neither was his voice. He seemed civilized now as he sat still and allowed the soft luminance of the fire to dance upon his sharp and fierce features. “Tell me, lich, why do you interfere? Why are you even here?”

“That depends on how you feel towards me, my actions,” I gripped the armrest, “and my goals.” I released my hold on my scepter and it stood on its own. “My ideal conclusion for this meeting is one where you agree to other methods of saving the demon race. That is why you’ve invaded Reuland, is it not?”

Another deadened grunt escaped him. He stood up, rolled his baggy white sleeves up just a little, and stoked the fire. “I see you’ve spoken with Lilith. Indeed, her methods are much better than mine, and it is sustainable. However, there is a reason why I invaded, as there is a reason for even the worst atrocities one could possibly commit. Lich, if Lilith was sovereign, like she so desires, humanity would have perished in the great war centuries ago.”

He sat back down, with a sigh. “Come, let me show you something.” He led me towards the side of the house, and opened up a hidden flight of stairs going downward into the darkness, at least until it was lit up with Dawnlights. There were paintings of elves on the walls of the hall that we traversed. Fyren’s hands were clutched behind his back. “You’ve heard of the affliction, and of the pact, I’m sure.” He turned around to look at me when we arrived at a wooden door.

He walked towards me, the very definition of steadfast and stoic, and directed his eyes towards a painting behind me. His mind appeared to be null and void as he contemplated the piece of art hanging on the wall. It illustrated an elf with a crown and a gentle smile. “This person single-handedly saved the entire elven race,” he turned around and pointed with his hand, “but doomed us all for eternity. He was the demon king that formed the pact with a devil of the underworld. He was Nemus’ father. He was my father.”