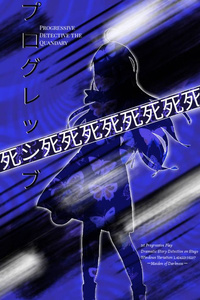 "I'm trying to think." Julius tapped his chin with the pencil's eraser trying to come up with their next hit piece for the detectives. It was normally a job Rine did but he was with Midare helping Mary with her training. Julius and Cran were left to watch Lambda because the girl couldn't be trusted alone with Hyde and others.

They were at the top of a staircase outside where they could see many buildings and fields of grass.

"So you're going to grind on these rails, jump off and stair on the edge of that staircase and do a kickflip then land near those shops there." Lambda pointed to a street corner where a convenience store was located. "It's simple stuff, just believe in the grind."

Hyde slouched his shoulders "Believe in the grind huh…"

Ibuki raised the camera she held "I'll make sure to capture your failures."

Ruudachi plucked the back of Ibuki's head. "Don't forget this is a training exercise. Even if it is ridiculous by my standards."

Lambda nudged Ruudachi forward "Come on Ruu, I need you to capture my kickflip."

"I'm going I'm going." Ruudachi hurried down the stairs to set up the tripod.

"Watch closely because this… will be quick as a feather!" She hopped up on her skateboard and grinded down the rails with sparks flying behind her.

Hyde and Mikael watched in awe as she flawlessly jumped to the next rails then kickflip off and land perfectly on the ground. It was an impressive feat of parkour. The detectives needed to be fit and flexible to catch their culprits. Hyde grinned and hopped up, "Check my skills..!" He shouted as she grinds on the first rail. Afterwards he landed then fell off his board at the second staircase.

"Really bad form. You're too stiff!" Lambda walked towards him to help get him back to his feet.

Mikael landed beside them then tripped off his board, catching himself before he hit the ground. "A-ah... that was close."

His board stopped rolling in front of a police officer who picked it up. Lambda started to sweat nervously. "C-crap..!"

The officer lowered his cap and let out a sigh. "People are out there being murdered and I find the detectives playing games. Tch! Your agency is full of shit."

"It's training." Lambda pointed at the man "Now give me that board back!"

The officer broke the board in half over his knee, shattering not only that but Lambda's heart too. He tossed it on the ground before leaving muttering about how the detectives were 'lazy'.

Lambda fell to her knees in front of the broken board. "Lazy…" she said quietly.

Cran watched from the stairs as the people who passed by didn't help to defend them nor bat an eye at the officer's actions. He took another sip of his drink. "That was unexpected. You'll always get the most random responses from humans."

"Don't say that as if we're any better." Julius responded. He wanted to scold the officer for his inappropriate behavior but he had little to no jurisdiction in Japan. He was a knight bound by Kaguya. And Kaguya was merely a guest placed in Midare's care.

Ibuki growled "Why I oughta-"

"Forget it." Lambda said calmly. "He's right… Yamiko wanted me to train you guys and I'm just here playing around."

"..." Hyde frowned "Skateboarding is a form of training. We need balance and precision and stamina to out match our enemies."

Mikael nodded in agreement "That's right. A detective has to be one step ahead! We're on the frontlines of investigations."

Mikael, Hyde and others all tried to cheer Lambda up. The sight made Cran turn his face.

He was annoyed by a lack of retaliation. If they continue to allow themselves to be pushed around then they'll make for an easy target for Soap.

Julius didn't see it that way "If we took revenge for everything that wrongs us then there'd be no concept of kindness."

"Hmm…" The statement made Cran think deeper about the issue.

In a greenhouse away from the city…
Mary stared at the bright flowers closely. The water dried on the lilies quickly, their white color shining. She stood from her crouched position "I'm surprised Yamiko manages this garden all by herself."

Cherri gently let the watering can drip rain on the flowers. "Sometimes she asks for help. Other times she doesn't. She's very distant. Seems like everyone in the agency is."

"What do you mean? Everyone's nice except Midare." Mary asked.

"That outward kindness is just their way of hiding true intentions. My sister is not the same as she used to be." Cherri said quietly. Mary grew curious, taking a step closer to hear clearly.

Cherri nodded and looked at Mary "Her struggle to become a knight tore her apart and still is. I don't want her to take the same path I did, however I cannot tell her that."

Being a knight was dangerous. Queen Reanne was also a suspicious person to be around. Mary could clearly remember the gaze she gave Midare. A gaze of pure hatred that tore through her with a rusted blade.

"Her dreams would be shattered. I don't want to see the result of that." Cherri placed the waterng can on the ground. "Julius was in a similar situation, but he's much more mature and can face the hardships ahead. However… that girl…" she trailed off.

Mary noticed Cherri furrowed her brow in hesitation to speak about 'that girl' and changed the subject. "What about Yamiko? Why would she be distant?"

"I'm unsure. I just hope she doesn't end up being our enemy." Cherri replied.

"That'll never happen." Mary then spotted a peculiar flower. A flower with purple on the edges, shaped like lilies. "I've never seen a flower like that before."

"Neither have I…" Cherri stared at the peculiar flower. She had felt as if she had seen it before but the memories of the past were all too blurry.

Yamiko heard them across the flowers, secretly listening to their conversation as she and Hoka arranged flowers in a bouquet.

"Strange… some remember pieces of the past yet others don't."

Hoka looked at her wanting to hear more of what she had to say. Yamiko tapped her chin, "It's something I want to look into, but there is so little time." She then finished wrapping the bouquet with a yellow ribbon. Hoka was curious who the flowers were for. Yamiko smiled, "Gifts for the unfortunate families of the victims. It lessens the pain of losing a loved one. Flowers are...very beautiful."

Hoka agreed but she pointed to the strange flower Mary and Cherri were interested in. Yamiko quickly responded "Because...those are the most beautiful flowers of all. They are not meant for wandering eyes. Now come,"

Yamiko began walking away "It's getting late…"

Mary and Cherri watched as the two left. Figuring they had spent enough time helping Yamiko, they too left the greenhouse to return to the cafe. Whether by sheer coincidence or luck, Hyde, Lambda, Ibuki and Mikael arrived at the greenhouse from a different entrance.

Lambda pulled on the locked door then scratched her hair. "Ah, well…"

"Did Yamiko lock the door on purpose?" Hyde rubbed his chin. They were seeking Yamiko for questioning, to see if she was the real deal or Elite in disguise. Getting to this spot was hard enough, now getting closer was more difficult. Lambda walked towards a brick wall beside them and with excellent parkour skills, scaled the wall to higher grounds. She poked around the grass then found a key "Gotcha!"

Mikael smirked, "Amazing! Is that what we'll be able to do once we complete our training?"

Lambda landed in front of him. "Yep! But that's if you complete it." She unlocked the door and they entered the greenhouse. Searching around, they found nobody but themselves and the abundant amounts of flowers.

Mikael nodded "Guess we'll have to do your plan Ibuki."

Bio: Director and artist of the Progressive series and author of various works. I'm an avid consumer of movies and books. You are not allowed to recommend a story to me. Feedback on my works will be appreciated.
*私に愚かな質問をしないでください

Just wanted to say I love the new cover art.

Has very "Season 2 Anime" vibes if that makes any sense.

"So you're going to grind on these rails, jump off and stairnd on the edge of that staircase and do a kickflip then land near those shops there."

He shouted as she griounds on the first rail. Afterwards, he landed then fell off his board at the second staircase. (Consider putting more build-up, like going more in-depth about his success then describing his unstable balance and unease, then his eventual fall.)

Another thing, the scene with the police officer could use more information, Maybe describe his expression and face, as of right now, it seems that a random intruder just appeared and broke a board. Consider describing 1, initial impression and sight 2, his reaction 3, the realisation of what he's going to do 4, what happens, for example.