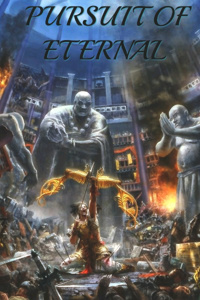 Dev's house wasn't far from the playground. Dev's family was very affluent, so he lived in a villa instead of apartments*. Dev hurried back to his house crying and bleeding. The villa guard noticed young Dev's bleeding. He rushed to Dev.

"Why are you bleeding, young lord? Tell me, I'll go and beat them, who did this to you?" Gently asked the guard.

Instead of stopping crying, Dev started screaming, "Mummy, I am injured."

Dev's mother heard his screaming, she rushed outside of the house to him. She was in her late thirties. She had light-brown skin, black hair, and brown eyes. She was wearing an Indian Sari, a bindi on her forehead. She rushed even without wearing any slippers. She bent down to Dev's height, held her hands, started cleaning his wound with her sari. She picked up Dev in her arms and returned to the house. The Guard just acted as the bystander and returned to his post.

Dev's mother's name was Isha. Isha gently nursed Dev's wounds. She gently looked at Dev, but sternly asked, "Why are you injured?"

Dev answered blinking his innocent yet devious eyes, "I was playing cricket in the cricket ground, the batsman knowingly hit the ball in my direction and the ball hit my face. You must punish them, mummy." And thick tears started pouring out of his eyes.

Isha shook her head and sighed, how could she not know that it was just a mistake. She gently wiped his tears and said, "Ok, I'll punish them."

"What do you want for your dinner today? '' asked Isha to cheer up Dev.

As expected, Dev forgot about his injury, a smile came on his crying face automatically. His smiling face made Isha break into a smile and kiss his forehead. Dev tried to make a serious face to think about the dish he wanted for dinner, while an unconcealable smile was on his face, His face was still wet due to tears, it looked weird yet cute at the same time.

Isha gently waited for his answer. Finally, after thinking for some time Dev answered, "I want to eat Rajma chawal** for dinner tonight as much as I want."

Isha smiled after hearing Dev's answer, she somewhat expected this answer. Rajma chawal was Dev's favorite dish. Isha didn't let Dev eat it regularly because of the huge amount of spices involved in it.

That night Dev ate Rajma chawal to his fill with a bandage on his nose. Dev's life was very peaceful, the education system was completely different today. You don't need to study everything, only three subjects were compulsory in this era's education system: Law, Moral science, and History(Dynasties and Wars) until you were 16. This system was implemented all over the world.

The education system taught Moral science on one side, the Wars on the other side. The adult age of the whole world was set at 16. Students can choose their respective interests and then they can pursue them. For example, if you're interested in Programming with a specific language, you only need to study that language for your employment, or whatever you want to do in the future.

Dev was turning 16 today. Dev had already decided what field he wanted to pursue. He didn't have any financial issues so he didn't have to worry about employment in the future, he only needed to pursue what he's interested in. Dev has always been fascinated with the Universe.

Humanity still hasn't conquered or found another life in this unending universe. As technology developed, we also littered in space. Earth's surroundings were filled with Satellite Garbage.

People started protesting due to this concern and in 2044 Nations announced a Space Federation, which will be in control of the whole world space programs. The Head of every Space organization of every nation will act as the commander and the nation will follow the majority rule. No private entity will be allowed to have any space program. The Federation suddenly announced these terms like the dictator, yet the Majority of the world applauded this decision. Private Space programs were the main reason behind so much garbage in Earth's surroundings in space.

In 2048, Space Federation announced that From 2050, only one organization will send one astronaut in space for the discovery of another life every 15 years. According to this timetable, India's turn will be in 2095. Dev wanted to be the one to go to space in 2095. Dev chose his interest as an astronaut. The syllabus was huge for becoming an astronaut, but Dev didn't care.

Dev has his 16th birthday today. He didn't have his innocent eyes anymore. He was 165 cm. He had black hair and black eyes.

Dev was going to his birthday party organized by his friends. He was sitting in the back of his Car. He can only apply for a license after turning 16, he wasn't driving as traffic rules were very strict. People wouldn't just have to pay a fine now, they would also get jail time which can affect their future.

Dev was sitting in his car when he suddenly noticed a crowd on the road which had stopped the traffic. Dev didn't care about the crowd, he ordered Driver to not stop to see what's happening. Dev's car was passing the traffic when Dev saw the girl who was hit by a car. His heartbeat stopped for a moment when he saw the girl. Dev asked the driver to stop. Dev got down from the car and rushed toward the accident area. Dev picked up the injured girl and glared at the crowd. If looks could kill, the crowd would've already been dead. Dev's family was known in the area, so the majority of the crowd recognized him, they didn't dare to look straight into Dev's eye. Everybody drooped their heads down due to the shame.

No matter what Era, people still find accidents amusing, the Government tried many things yet people would only look at the accident scene instead of helping the injured.

Dev made his way toward his car. The driver helped Dev put the girl safely in the car's backseat. He put the girl's head on his lap and asked the driver to make his way toward the hospital. The girl was unconscious and had a mild injury on her forehead. There were scratches on her knees and palms due to the fall.

The girl looked the same age as Dev. She was 160 cm tall, she had white skin, black hair with the addition of some brown hair, and Grey eyes. Dev thought the girl must be a new entrant in the town as he hadn't seen her in Nava Nagar. Nava Nagar was just a small town most of the land in the town was owned by his family or the government.

Dev took the girl to the hospital. Doctors admitted the girl without any issue. He was waiting for the reports when he got a call from his mother. Dev tapped on his watch to accept the call, he put an earbud on his left ear and answered, "Namastey mummy, what happened? Why are you looking so much disturbed?"

Isha appeared on the other side with a concerned look on her face, she answered, "I got a call from one of my friends and she saw you entering the hospital. why did you go to the hospital?"

Dev smiled after hearing his mother's concern for him, he felt gracious to have a mother like her.

"I am fine, mummy. I saw a girl in an accident, so I brought her to the hospital for treatment," answered Dev while laughing.

An expression of relief appeared on Isha's face after hearing Dev's answer.

A look of pride and complaint appeared on Isha's face at the same time. She sternly said, "I am proud of you for doing what you did, but you could've called an ambulance for her. The hospital wouldn't even dare to refuse if they got a call from you."

Dev's face went red after hearing Isha. He thought, "O my innocent mother, how could I call an ambulance, when I only stopped because of the girl." Dev didn't dare to say his thoughts out loud.

Isha mistook Dev's red face as his guilt, so she gently said, "Don't worry, You did great. Please don't do it next time."

An abrupt end came to mother and son's conversation when Dev noticed the doctor coming toward him.

"I'll talk to you when I return. The doctor is coming. Bye, Take Care!" said Dev before cutting the call.

The doctor came to Dev and greeted him, "Hello, Dev sir, I am Dr. Raman. I'm treating the patient you brought."

"No need to call me Sir, You're an elder of mine." refused the pleasantries Dev.

"How is she? Is anything serious?" asked Dev.

"There is nothing to worry about. It's just a mild concussion. She'll wake up in at most 10 hours," answered the doctor. Dev asked the doctor whether he can enter the ward to see the girl or not.

The doctor didn't stop Dev from entering, so he entered the ward and saw the girl lying peacefully on the hospital bed. A smile came out unknowingly on Dev's face.

Dev couldn't wait here for 10 hours because it was his birthday today and he didn't want to lie to his mother about why he waited. Dev tapped on his watch and ordered a bouquet. He left his Phone number on a piece of paper, pasted it on the bouquet, and left.

Will Dev pass the third test?

We'll get the answers next time…

*Land rates were very high due to the population, so 99% of the world lived in apartments.

**It's an Indian dish called red kidney beans in spiced gravy with rice.