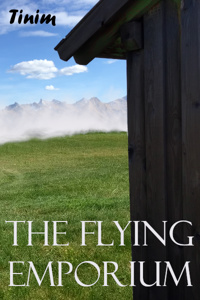 After transmigrating and getting the whole deal of benefits: a class, a subclass, and even a System, Severin was ready to set out and conquer the world.

If only he wasn’t stranded in the middle of nowhere. And if only he was able to leave this small wooden hut.

“Well, if I can’t leave, then I’ll better make sure others come to me!”

Its a actually quite a fun little premise, but its a first try at writting and clearly shows how inexperienced the author is.

The characters are flat and very one dimensional, their motivations are overly simple, and they're not particularly clever at how they deal with problems.

That is made worse by how overly "videogamey" the litrpg aspect is, making it so this might as well be VRMMO and not Isekai given how the whole wordbuilding and societal aspect are basically what you'd expect from an MMO and not a fantasy world.

The sentence structure and flow are not great either, bunch of jarring jumps from perspective to perspective with no clear breaks, mixed in with run on sentences that overexplain everything because the author doesn't know how to link them with wordbuilding or how to write his characters in a way where they are capable of figuring stuff out by themselves.

Overall, it reads like a translation of a bog standart japanese light novel, a good translation mind you, this is very much readable and enjoyable if you can look over its faults.

Its an interesting idea, if the author sticks with it and rewrites it once he is more familiar with writting, this might become a really great novel. But right now... its mediocre at best.

It's a good start, a good premise, but it just... doesn't seem to be going anywhere. At least not anywhere any time soon.

We get a few chapters with the customers who are using things bought in the shop, and those are some of the most interesting chapters. We get to hear about their lives and what they're doing through in-store chit-chat, and frankly I kinda wish we were following them instead. Not that figuring out exactly what percentage of each sale is going to our brave protagonist isn't interesting, but... There's a wide world out there that the author has hinted at, and we (along with the protagonist, granted) barely see any of it.

Style: Good. Kind of headhopping third limited pov, but it isn't too confusing. Once you figure out that the author uses ' for inner dialouge and " for spoken, you're golden.

Grammar: No complaints in that department lol

Story: There's nothing strictly wrong with it, it's just slightly repetitive. The author tends to end chapters with mild cliffhangers, things like "he looked down and cheered for joy at what he saw", and then the next chapter might not tell you what he's seeing for a couple paragraphs, or else will turn out to be something less than interesting.

The only plot hole is the fact that these people apparently never eat or poop. On the one hand, it can be handwaved as something the author simply doesn't feel like writing. On the other, everything else is explained in minute detail, soooo

I love the characters!

Samuel is apparently so high-level he's basically a god, and his two apprentices are fun to watch as they learn. They mostly train, but the real battles they participate in sound fascinating.

And Xander is a fun character, trying his best to fit in with a new group, brash and overconfident as hell...

I wish we follwed them.

Instead, we follow Severin, whose main concern is getting enough money to buy a decent bed.

As of chapter 26, it looks like something fascinating is about to happen with Samuel and Xander and everyone else... but we won't be able to see it. Because we're following Severin, who is stuck in the shop at the top of the mountain, and is overall not very interesting.

...And maybe that's the point. Maybe the author wants us to feel trapped with him, in which case I applaud the flawless execution.

I read it. Its readable. Did I like it?

I'm honestly not sure. It's different. I myself can't imagine writing this story concept, but the author does a good job. How to describe it? Imagine you wanted to read about the life of NPC as the system works him like a slave laborer, trapped inside, unable to do much but endlessly grind materials provided into potions with set prices. Give the NPC only a tiny amount of control over anything, mostly on how to spend profits on a Sims style expansion to his prison. Then, pepper that sad story with random backstories of the customers coming in and acting all impressed by the useful items that are helpful towards their lives as RPG (Think WoW or Diablo) characters, with cool downs and item slot limits etc.

Is it good? Ah, sure. It'd recommend you read it because it's kind of weird and makes you feel sorry for the poor MC. I just hope that once he upgrades to "flying", and gets enough employees, the shopkeeper might actually find enjoyment in his life, beyond the vague hope of eventually getting a nice bed and enough time to sleep.

In conclusion, I think this novel is meant to be funny, and you might chuckle reading it... But for me I think its mostly impressive for being able to take the NPC shopkeeper's story and make it interesting, if a bit depressing.

This is a very fun story that I'm looking forward to hearing more from....

However, the main problem with the system interaction stories is it always seems like the main character has little to no agency.  There's just no difficulty in gaining more powers and abilities...  And this story has that problem in spades.  We get an off story description that he combines stuff and then he sells...  Then he gains more cool stuff.  That's fine, but with the main social interaction being free via the sales, we never see the main character struggle.

Even further, we are over 20 chapters in and we really don't know the mcs motivations, likes or dislikes.  It seems so far that the mc is literally just an extension of the system, an npc, rather than a living, breathing person.

I hope unsavory characters or monsters or something begin bothering the character the soon... Because everything just seems too easy...  With the overawed super-powered adventures just being pushovers for the mc so far.

This is a unique, fun story. It has pretty good grammar, spelling, and flow to the story. The longer chapters away from the main character were annoying, but that's personal preference so I didn't factor that into my rating. I'm excited to see how the title of the story factors in, and to read more!

From what little I've read so far, the story seems interesting. However, a few points that can be improved upon are the run-on sentences, POV switches, and descriptions. By that I mean not having every sentence be it's own paragraph. Work on making it easier to identify who is speaking/thinking. While also adding further descriptions to the general setting/body language etc.

An example would be when Samuel enters the store with his students. Rather than show us a better picture of the action, I.e expanding upon how samuel enters the store (the sound of the door/ heavy boots on the wood/ sounds of conversation between the group etc. the mc simply states that Samuel is back, sells him more potions and Samuel leaves.
the story has a lot of promise, but still needs some editing or rewriting at a later date.

I don't usually read LitRPGs, but the lightness of this one enticed me. It's a nice, unique concept, I like the main character, and it's a pretty fun read overall. The story moves at a brisk pace and the chapters don't feel too long or too short when reading.

My only issue is the spacing of paragraphs; there's too many, too frequently. I suggest combining a few of them at a time, and not including paragraph breaks in dialogue. The double paragraph spacing is random and stops me in my tracks while reading. I also wasn't really a huge fan of the chapters where Severin straight up didn't appear, but I didn't mind them much.

The writing style is getting better with each passing chapter, so good job on that front. The worldbuilding isn't overbearing and it's easy to understand. The idea of the [Berserker] class is something I love and I would definitely play it if it exists in any RPG out there.

In short, it's a fun and unique idea with enjoyable writing and good characters. The only real issue I have is the paragraph spacing, but it's no big deal, and it doesn't take away from the story. Good job!

What a great start to a story I feel like replaying a shop game. I like how mc takes everything in stride and just wants to enjoy his time in this new world. Characters aren't super deep but are pretty interesting. World building is nice as well. Will follow and hope for great things.

Still on Phone. Short review because of that.

Characters are neat with actual depth to them. Love the names.

Story is fine enough. Might get more complex down the line. Idk.

Grammar has issues to a lesser degree.

Overall a good story. I recommend it to anybody curious

For anyone that's enjoyed running an rpg shop, this is for you. Severin is fun, and so far is working within the system.   Solid read, fun characters, and interesting limitations on the mc.  The addition in an employee promises some interesting interactions in the future.  This is currently one of my favorites on royal road.