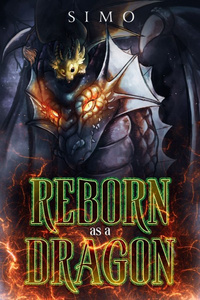 Reborn as a DRAGON

PPS: The cover is made by the amazing @erinm_arte check her out!

Reviewed at: Chapter 10: The start of the Hunt

With the limited amount of chapters in circulation currently, this review is subject to change once more are released. For now, however, this novel is simply fantastic. For me, who has searched the depths of this website for non-human main characters (particularly dragon main characters) this story in particular shines above many of the others I've read and I hope it continues this positive trend well into the future.

Style: the style of a human being reborn as a dragon is not new in the slightest however, the author sort of meshes draconic personality traits together with the reincarnated human which makes for a more seamless transition to this new world. Pair this with the fact that his draconic family is actually present in this novel and it makes for a refreshing experience.

Story: The story so far is, of course, quite limited and as such, I cannot give it a full 5 stars. What is there so far is quite good but there is still no drive or purpose yet which I assume will come soon once the mc learns the ins and outs of living as a dragon in this new world.

Grammar: pretty much flawless albeit a few mistakes here and there. There is nothing that breaks the flow of the story so I'd give a solid 95%.

Character: The characters in this book are, so far, distinctive, 3 dimensional, and developing complexities at a rapid pace that makes me genuinely excited to see how they will turn out in the future.

Overall, I am very happy this novel exists and because of making me happy, I am going out of my way to give this the 5 star review it deserves. Great job author and keep up the great work!

The title says it all.

It starts off like a 14 year old dnd nerds fantasy... then it kindof keeps going. If the title alone is enough to get you salivating might be worth reading, but if it's not I would give this one a pass. Characters are a bit nonexistent so far, each of the other characters are stereotypes. The only real draw seems to be it's a dragon. But if you care more for what a character is instead of who and you like dragons give it a shot.

Ok story overall but I didn't get something from the writers perspective. What is the point of the Mc being a reincarnated human. Dragons are born smarter than humans as far as we can tell. So having a human's knowledge beforehand brought  nothing to the table other than how he first approched magic for like 1 chapter. He lacks empathy for anything non-dragon so that's not the goal either.

Being all dragon from the start would not have changed anything the mc does other than the inner monologue so I see no point in being reincarnated other than being able to quickly recognize stuff.

I really enjoyed it, just be aware that first 50 chapters are barely enough for a prologue.

Otherwise it's a nice little read. I'd prefer having less action and more chapters about world building, lore and exploration of magic. If the author keeps the quality as it is now it will be a wonderful read later on.

I will come and revisit the review in a few months.

A power fantasy not even good enough to be a guilty pleasure. Character starts as a strong race, strongest in his hatch, get stronger faster... no true struggle besides the cliche "close fight that the mc faints at the end of".

The chapters are super short for the sake of getting to trending which is a recipe for semi filler chapters to come and leaves less space for ideas that cant be summed up in less than 10 paragraphs.

Also by the 20th chapter the mc sees himself as a dragon and only has faint recollections of humanity... If the mc just hatched and everything is going to be explained to it, why make it isekai?

There are however some unique takes and a bit of trope diversion on some character which lend this story a purpose. (Edgy rival black dragon is suprisingly not just edgy rival dragon)

Good, but could be better.

Reviewed at: Chapter 10: The start of the Hunt

It's a quite interesting take on being a dragon, one where the protagonist doesn't somehow gain a way of shapeshifting into a human by the end of chapter two.

The story does suffer from some stylistic and grammatical issues, but it's bearable.

In short, it's worth a read :P

I found the strength to write a review, I feel sad when the author throws his novella and I hope my review will give enough motivation for a long time along with the others who rightly praise you, at least for the moment. Dragon novels have separate criteria for evaluation, the first five ladies stars for the lack of the ability to transform into a human, it is very depressing to read novels in which the hero is a dragon only on paper, in fact, being in the form of a humanoid all the time. In my memory and according to my judgment, this novel ranks second among all the novels about reincarnation into a dragon, the first is the abandoned one, from one Russian author. The style of the story and the characters get 4.5 stars from me, good, interesting, gave me pleasure, but does not make me scream with delight. This is a good job on this site that a reader like me is looking for, sifting through mountains of rubbish to have a good time. I really have nothing to complain about, after reading 14 chapters, I noted for myself personally that there is room for improvement, I will not evaluate grammar, so in the end we have 4.5 stars, plus 0.5 for the fact that there is no system, vain gods, quests and other things that make me frown and close my browser tab. Thanks google translator, I hope the review is translated correctly.

A fun romp full of action and dragons

They might not be the heaviest stories you can read around here. They might not feature the most complex plotlines or ginormous world-building you'll find from the start. They might not even feature anything ground-breaking in character. But what they do feature is something we can't get enough of... and that is a special archetypal character type that we all love.

The last story center around a dragon I read was Vainqueur the Dragon, and that story was amazing. It was hilarious. And it was super sharp, fun, witty, and wacky. This is not Vainqeuer, but it tickles my inner joy for dragons who I find to be some of the mightiest, rawest, and greatest creatures in most media.

Although I do have a bone to pick against dragons when it comes down to my preferred creatures facing against them. But that's neither here nor there. What we should focus on is that the author presents us an Isekai where the MC becomes a dragon. Thanks to him being an Isekai, we get his unique perspective on the matter that helps us relate to him while he's going through the situation.

His reactions are over the top, and fun, and sometimes human, and obviously dragon. He puts himself as the alpha after fighting some of his siblings. But then we watch with delight as the other young dragons start to show their own personalities that makes them distinct and cute at times.

If there's one major thing I'll like to point out that bugs me is one of the dragons' names.

Style wise, the chapters are on the short side. But that's how the author keeps up with posting and keeps his quality.

Grammar wise I do see a couple of mistakes, but they're easy to read over. No big deal.

Character wise... I have my heart set on Golden Boy and He Who Needs A Better Name.

A good take on the "reincarnated as a dragon"

A worthy reincarnatation story, so far focusing much more on the "being a dragon" than trying to get the previous human life to be the drive behind the new experience/body for the protagonist. It tries to paint the picture of a foreign mind and how interaction happens with a creature that is not intelligent in a human way. I see potential in this, with the various threads that has been revealed so far.

one of my favourites

Reviewed at: Chapter 31: Life on the mountain

for starters its great to see a story where the mc dosent try to get back to there human form right away. the story fells like it progresses smoothly and no over the top info dumps for no reason which is great. the chapters feel a bit short and alway leave me wanting more which is a good thing that the story does but i feel the chapters should be longer. overall great story and one of my favourites on this site so far, the auther also has a patreon that has quite a few more chapters on it so its a good option if you cant wait and want to read ahead like i did.