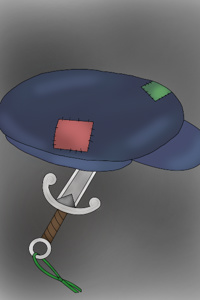 London’s Thief - Catch Me if You Can

Alex walked towards her mark, hat low, and striding casually, keeping the noble in the corner of her eye.

He was the perfect mark; Alone, well dressed, careless about his satchel, tied loosely around his waist, and not paying any attention to the people in the street. Like Alex.

She pulled her hat lower, her long hair tucked under so she could pass as a boy.

It wasn’t that Alex hated being a girl, it was just easier to get around as a boy. Nobody hassled you, or kicked you out of a tavern, and there were better jobs.

It also kept Alex’s past from catching up to her, but let's not get off task.

Alex kept walking, and once almost level with the noble, she quickly nudged a rock under his ornate cane, causing it to slip forward, knocking him ever-so-slightly off balance.

In that moment, Alex tipped her fingers into the satchel around his waist, and pulled out his purse.

She kept walking, sliding it into the secret pocket at the small of her back, not even bothering to look in it. Alex had played many poker games before in her short sixteen years, and she knew you didn’t count your money til the dealings done.

The noble never saw who robbed him. Nay, he didn’t even see he was robbed, until he happened to need that money.

The noble strode into a good looking tavern, filled with happy looking men and rushing barmaids. He walked over to his mates, sitting at a corner table; where they could see the door, but weren't all immediately visible to anyone walking in.

“Took you long enough Rob,” one of them grumbled. “You're the only one that got money for food.”

The noble - Rob - sighed, but didn’t protest. This was a normal occurrence for them, given their occupation.

He reached a hand for his purse, raising his other hand to gain the attention of a passing barmaid, and then froze.

Rob put his full attention to the satchel, supposedly holding his purse, but it was gone.

He turned wide eyes to the waiting men. “I’ve been robbed,” he whispered incredulously.

The men laughed, gaining the attention of a few surrounding tables, until they realized he wasn’t joking.

“You? You got robbed?” Said the man with green eyes.

“What, did you sleep in an alley?” Queried a one handed man incredulously.

The noble ran a hand thorough his hair in frustration. “No, all I did was walk from the woods to here. I didn’t talk to any one, I didn’t stop anywhere, I barely even tripped!” He stopped.

“I tripped,” he whispered, wide eyed.

“You...tripped?” Said a man with a red beard, not understanding.

Rob grabbed him by the shoulders, startling red beard. “I tripped.” He said rapidly. “There was a rock under my cane, I thought it was weird but I chalked it up to not being used to the blasted cane. But it wasn’t that,” the noble said, shaking red beard. “A boy walked right by me went I stumbled, that was the only time someone could have stolen it.”

“Okay,” said green eyes, “so what now? We let the chav keep the money?”

“Why?” Asked a burly boy with an eagle pin holding his cloak together. “It’s not like it was much anyway, and for all we know, the lad could need it. Why not forget about it?”

“Its not about the money,” Rob answered. “The lad managed to rob me. Imagine what we could do if we recruit him.”

“How do we find one boy in the entire city of London?”

Rob wished he had an answer for him.
He really did.

Bio: Bring the flex tape, I love breaking the 4th wall. 😍
Go follow my insta @clarkejameswrites for more info once things pick up. 😁