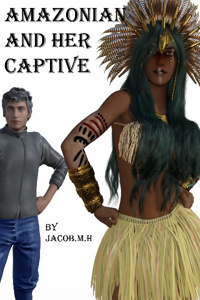 Amazonian and her captive

During a ferocious battle on a dark, muddy, blood, and soaked field, a young teenage boy, who was then drafted for the army to defend against an incoming threat, was carried off the battlefield and sat up against a tree by another boy from his village. When he saw her, the person who would change his life forever and give him the chance to escape death, the thing he hated most, an Amazon, he slumped to his side, and he watched as the life left his eyes.

I understand fully this story isn't for everyone as after all I am writing is still improving and that the story can get quite disturbing and gory at times.

WARNING: despite the slow beginning does become very violent and gory as the story goes on.

Images I have originally made are used in the stories, I also have a Wattpad where I upload only the images. Also a friend said it was a good idea to also upload this on Scribble Hub.

Also, have exclusive stories I upload only on deviant art. Sometimes. When I remember.

Interesting to say the least lol

Reviewed at: Chapter 17 - the calm before the storm.

Just to start the story's writing can be a little messy in areas. The stroy can be the same. It goes from 0 to 100 some times very quickly. It can be *very* gory and dark at time like in chapter 5. Besides that though I cam see potential and kind of like this weak little  person being thrown into a gruesome and gory world. Story can also be very slow at times. But besides this I like it so far and am interested to see where it can go from here...