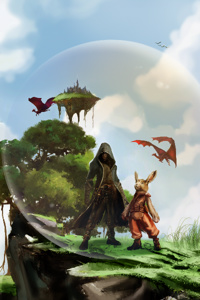 Healing Dungeon" is about a 25 year old young man named Avan, who is torn from his rather boring life to wake up in Aorus, a world full of magic, monsters and dungeons.
Through a few lucky coincidences, and an ominous skill called "Potential", he awakens a class that has never existed before in all of Aorus, in a sealed-off and magic-sealed ruin: Dungeonheart (Human).
Dungeons are usually sentient, but never sapient, and can't actually walk on two legs through the world.
Join Avan as he pursues his passion as a healer and martial arts enthusiast, resulting in a hybrid of a moving dungeon with healing abilities.
"Healing Dungeon" will include: City building, strategy, very little romance, exploration of the world of Aorus, and a touch of power leveling. (There are elements from other fantasy novels, as well as anime, games, and more).
What will all be possible with a dungeon that can move, but still brings some of the familiar dungeon mechanics along for its journey?

-- Please note that the beginning and thus the first chapters were really my first writing works in english, and can only be rewritten at a later time (lack of time in favor for new chapters) --
(The writing style and also the story improves VERY much from the 12th chapter at the latest! Proofreading is available, but I depend on any well-intentioned advice from you guys).

If you have any questions, suggestions, constructive criticism or just because you feel like it, feel free to leave me a comment below the respective chapters!
For every positive and serious review or rating I am infinitely grateful! ;)

I am a creature of few words and the beginning is therefore a little faster than I would have liked it now in retrospect. Please do not expect huge paraphrases and descriptions of the environments, but only what is really necessary to get into the scene.

Cheers and hopefully see you in the comment section.

a series of events without a single human element

Reviewed at: 9-A quick side story: Yue's misery

Character has zero depth. I'm isekaid ok, gonna walk around and have fun. See something horrible, no reflection on it just on to the next thing. Find someone I can talk to but ask them anything about this world stats or system? Nah too complex. Basically it's a character just going through the motions without being a real person. Grammars good enough and writing style isnt horrible though so two stars if your in the mood for a turn your brain off progression fantasy. Just dont expect anything resembling a person as it's more of a rough outline than a story.

Only thing missing is a fedora

The main character in this is...kind of a Gary Stu neckbeard. Not horribly so, but enough to be pretty cringy. Don't get me wrong, he's a nice and polite neckbeard, but he says stuff like "young lady" and fake tips a non-existant hat. Which is fucking weird when you are talking to someone who is currently locked up in a goblin prison crying. He's trying a little too hard to be a White Knight (and literally internal-monologues about being a gentleman, ughhh).

So yeah, this story doesn't shy away from cliches, and the dialogue is kind of repetitive and socially awkward. But it's readable, and I do like the Dungeon Class premise. If you are in the mood for a power level fantasy with a bit of a cheesy main character, you will probably like this.

I can't connect with any of the characters. They're just so... flat. Conversations are awkward at best. Not really sure if there's a plot. Its more about having an OP character that doesn't feel like he deserves to be OP.

It's a litrpg world that hands out stats like candy. The title seems misleading since the "dungeon" isn't a traditional dungeon. And it also seems to only function as a power up for the m.c.

I like how the grind isn't the focus of the story. You won't be slogging through mobs of slain enemies that honestly don't matter. The issue is, there doesn't seem to be a focus.

It's still fairly early on, but its easy to see how some might connect it with another story. There are some major similarities, but I won't name it since I'm tired of having my reviews arbitrarily removed.

Had to google a word that isn't commonly used in English once. Kind of funny since I learn new words of my own language from people who's primary language isn't English.

The biggest downfall about this story is I can skip chapters and not miss much. Maybe it's because it's still early on, but if I can do that then why should I bother reading the story. That's the overall feeling I get. There is a lack of purpose 12 chapters in, and I don't think I want to slog through any more. Best of luck, hope this helps.

Reviewed at: 11-Pain teaches you the best lessons of life

Although this book falls a little into Mary sue territory, it is interesting and worth reading. I haven't read anything with a premise quite like this one, and I am excited to see where the author takes it. And to the author -- don't let a .5 star rating bring you down!

Overall it’s a new concept for the class its good

I like the class but it's the exact same beginning as other storylines it's easy to follow.  Some words are misplaced in sentences but if English is not ur first language then it is easy to do that.  English is the hardest language to learn just because we have a lot of inference.  People who just give a .5 rating because of a few mistakes need to take a good hard look at there own life and honestly ask if they are perfect.

Reviewed at: 8-Become the beast

The story and characters are decent so far and I really like the plot. The only critic I could give would be to work on making the dialog a little more real and smooth. It feels a little stiff and unpolished but it's not bad. Other than that keep up the good work!

So far I have enjoyed reading this story.  While the author is not a native English speaker, I am impressed how well it is written. The main giveaway is phrases and wording that is not usually used by native speakers.

The MC of this story is shaping up to be very OP so it will be interesting to see where it goes.

Reviewed at: 11-Pain teaches you the best lessons of life