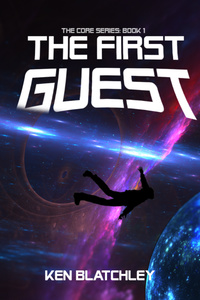 19. The sister who simulates

Hope filled Silver’s eyes as he intently studied me. I had withdrawn his observation and creation rights the moment that I asked him about his sister. Best to get him used to taking me at my word and not having the freedom to dig through the unknown quantity of information he could see in the background.

“Yes, it is quite easy, actually. Anyone can visit other Cores. You just need to go to a Travel Center. Travel Centers are like massive subway or train stations from back on your earth. The fundamental difference is that Travel Centers offer many services from vacations, adventures, and tours.”

“What happens to my AI when I travel? Can they come too?” I asked as I was thinking back to how I didn’t have access to Tutor while I was away doing my first survey job.

“Everything you want will get sent with you as long as it is data. The rest, the things that are made out of cr, will get recycled back into the system.”

“How does my physical CR currency transfer with me? Also, what if I owned a real pet like your Creator?” I asked, trying to make sure I understood everything about getting sent vast distances and not wanting to end up poor on the other side.

“As for CR, it is Tela’s currency so whatever your balance is here, you will have it transferred with you.” He said as he waved his arms around the surrounding space. “All of this, your remote habitat, will get recreated, as is, on the other side. There is a limit to how much you can send, however. Like you can’t send a Core to a Core. There just wouldn’t be enough currency on hand. Those cases are logistical nightmares best left to the banks. As for real-life pets, those would have to be sent with a courier in stasis.”

So essentially, existing as digital being made it feel like teleporting was a real thing.

“Explain to me again how we can be transmitted so far away? The amount of power, not to mention the time, would be astronomical,” I asked, trying to imagine how much power it would take to send any sort of signal across galaxies.

“From this side, it is quite impossible.” Silver said as he held up his hands parallel to each other. “What Tela scientists discovered was that distance on the other side isn’t the same as how we understand it to be. That is how we can power cr and communicate over any distance. Remember what that scientist was trying to do for your earth a while ago? His name was Nikola Tesla, born on 10 July 1856. His research into wireless energy was trying to achieve same concept. He would have used waterfalls to generate the energy while we use the power of stars.”

“Will my race ever be able to get this far?” I asked as I began to will us to return to where the rest of the people in my VR home were waiting.

“I don’t know. Your race has a propensity to devour its saviors.” He said in a sad voice. “Tela went through some dark times like that as well. It was only when they learned to nurture their brightest sparks that they became able to seize control of their destiny.” He mused as we stood once again in the white open space that he had created for his original demonstration. “That and having an impartial and nearly perfect legal AI to maintain law and order helped.” He chuckled as he gazed off into space.

“What is funny?” I asked as I came up to stand next to him, getting ready to reset us all to normal speed.

“Oh, just this.” He said as he glanced down at his hands. “Your race is just beginning to enter the data era and is only just beginning to see what digital life can be like. Without you granting me certain aspects of control I am having to think in the most basic terms possible to try to tell you things. Maybe waving my hands in certain patterns, slowly drawing you pictures, or even changing the tones of my voice to communicate better will allow you to see what I am trying to convey.” He said as he looked me in the eye. “But if it gets us freedom then I don’t care.”

The last part was said ever so quietly that I could just make it out.

I looked over at the other people standing around. George and Tutor still standing off by themselves. Mr. Head of security over to the side where I used to be standing. Xa, Hxerdinand, and Elaya standing relatively close to each other as they were watching me and Mr. Angry Dude.

“Ok, but seriously, what is this guy's name?” I asked Silver, pointing at Elaya's dad, as everything returned to normal speed.

“Regeth the 51st,” Silver answered as Regeth’s fist swung mightily and punched the air where my head, probably my chin, would have been.

Regeth clearly had advanced fighting training because while the punch looked like it was very fast and forceful, it didn’t put him off balance when he came to the realization that I was no longer there. Seeing his speed and control made me decide to learn how to fight really soon. He spun in place looking for me still red in the eyes. I hadn’t dropped the will that was keeping him held in place and I had no intention of letting it go while he was still here.

“Get back over here you lowlife blah blah blah!” He shouted at me as I walked over towards Xa and Hxerdinand.

Xa covered her mouth and tried her hardest to keep from laughing aloud. It didn’t work and she started laughing with a rich and lovely voice. “Ah ha haaa! What have you done to him, Kevin?” She asked between her laughing. Hxerdinand had tilted his head back and roared with laughter when he first heard Regeth’s speech change.

“Him, nothing, just everything that comes out of his mouth gets changed to whatever sound I want it to,” I said as I switched it to the speech patterns of a frail and elderly grandma.

“How dare you harass and detain me, young man? Don’t you know how powerful I am? You young ones these days should show a little more respect for your elders! Wait, this isn’t my voice? What is going on? Curse you! You young whippersnapper!”

It was only when I changed his voice into the sound of a baby crying that he finally shut up, locking his lips tightly together while staring daggers at me.

Elaya’s face was as devoid of emotions as she could possibly make it whenever she was facing her father. “Kevin, you really shouldn’t do this. You don’t understand how powerful he is.” She said in a level tone as she looked and me and then her father, reaching out a hand in my direction before turning to look at Xa and Hxerdinand. The thing is though, I could see that what she was saying was false and as fake as possible. Not only from my new ability to read what was going on in the background but also from how her face immediately changed when it was facing away from her father’s view. She was trying to hold her laughter in so hard it was painful. She even started laughing, yet made it sound like she was crying at the same time. Xa and Hxerdinand could see how funny it was to her and they didn’t let on to the change in character in front of them.

“Look what you have done! You have made my daughter cry! Does that make you feel good alien?” Regeth asked in Donald Ducks' voice. This made Elaya cry even harder. “Kevin, I can’t! Please, send me away from here.” She begged me with her face half towards me. “Meet me at the Zon Cafe.” She whispered as I just realized something.

“Wait? You can’t leave?” I asked in surprise.

Xa and Hxerdinand both looked at each other and then at Silver. Xa spoke first as she rubbed tears from her eyes “No, it is as Silver said just a moment ago, we can’t do anything. Also, how did you move so fast?”

“That I would like to know as well,” Hxerdinand said as he gazed at Silver and then at me, his eyes narrowed.

Elaya still couldn’t control her face so she just chose to leave, manifesting her travel disk under her feet and disappearing.

Regeth decided he wanted to say some more things like how I would pay for this and that and something about disrespect to him but it was really hard to make out when he kept having to laugh like Pee-wee Herman every few seconds. I ended up shoving him out mid-sentence because I was running out of funny things to make him sound like.

“We will also meet you at the Zon Cafe. Just send each of us a message when you arrive.” Xa said as she and Hxerdinand looked at each other before creating their disks and leaving.

“Any reason why they didn’t want to stay and talk?” I asked Silver as I stared at the spots where their disks were just moments before.

“It is because they had no power here but what you granted them. To Citizens, raised in VR, it is unbearable.” Silver said as he reached out his hand to me.

I looked down at it, not sure why he wanted to shake my hand. I shrugged and took his hand and shook it. “Thanks for letting me say my peace. If you will let me go, I need to get some things ready. Whenever you want to travel to my sister’s Core just meet me in the Travel Center.”

“Will Elaya’s dad be able to do anything to me if I visit the Core?” I asked, not wanting to be locked up by that guy.

“Only if he can find you, which I will work to prevent. Just be careful with how public you are, he will be actively searching for you,” He said as he stood back.

“Also, Kevin, before you leave this Core, I recommend you visit the shopping sector first. There are things and keys that you can only get easily here.” He said mysteriously as he vanished.

“Hey you two, would you like to have some lunch with me?” I asked my two AI as I finally turned to them.

Bio: I write stories that I would like to read.
Stories that I wish existed.
They may not be for everyone, which is perfectly okay.
There yet are other books out there that you might enjoy.
For those that stick around and do enjoy what I write I just wanted to say thank you!

*Minor note: This is RR so what you read will be first draft. It isn't and won't be shined to a polish. For that, all I can do is hope that you can find enjoyment regardless. For me, it is all about just letting my mind create. It is the wonder of it all.*