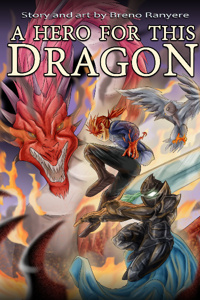 A Hero For This Dragon

His father is the emperor of all dragons.

Her soul is imprisoned inside of an indestructible armor.

Each came to this world against their will, but they now need to find each other and work together to face the looming threats that are approaching.

The young dragon and the hollow knight.

They can't save themselves, but perhaps, they can save each other!

The best part of this story is the occasional artwork posted in the author comments.

There are multiple perspectives in this story. The main two viewpoints is the boy Kurt who went from the modern world to being a dragon and a girl who was reincarnated as a living armor.

Kurt and the girl are players in a otherworldly game, with rules enforced by mysterious beings. As key pieces in this game, Kurt gets the bonus of a talking owl and the girl has ... a tree ... and they both seem to be facing a world of enemies...who aren't always enemies?

This is a teen drama with a side helping of power games.

Reviewed at: Mother slaps a lady

This isn't the story I typically read but I enjoyed it.

The first chapter is captivating and has an excellent twist to it.And each chapter, though it has world-building and character-building involved is overall a light-hearted, enjoyable read.

The male main character is a relatable teenager with relatable real-world problems. Majore stress and pressure from their family life sends the teen into an emotional swirl which gets taken advantage of by a creepy old lady. And the MC seems to react to his old world and new world in the way I would expect a teenager to do. He doesn't question a whole lot but that's what I like about it - relatable and by this, it adds some reader tension.

The female MC, I didn't read a whole lot of yet but I like the concept of the dual POV especially after I realized how they work together in the prologue.

The writing style isn't honed in yet. It's a little bit of this and that and a few in between but overall, it keeps the tone of the story consistent which is what I like in a story.

The story, the most interesting and engaging chapter I've read so far was the first one as it felt flushed out and full whereas the other chapters are missing that feeling. It might be chapter setting or theme, I'm not exactly sure what it is but they don't compare to the first epic one. I enjoy the writer doesn't get distracted from the action/adventure feel and keeps the reader attached to this.

There's not too much dialogue and what is written is in a quirky way I haven't read before but it doesn't take away from the read.

Overall, a fun read that could use another round of edits eventually, but it's clear where the writer wants the story to go and how they want to develop it.

Reviewed at: Out of your element

Grammar: There are a few minor things here and there but nothing that hampers the story itself. The use of brackets instead of quotation marks can be offputting at first but once you read the early chapters and understand what they're used for, it's easy to follow.

Style: The story is written simply, but in a way that's easy for younger audiences and more casual readers. There aren't lengthy descriptions and long, complex sentences. The writer gets to the point with dialogue and scenes. It is also very fast paced because of this, which I think is more of a matter taste to determine whether or not that is a strength or a weakness.

Story: Like most Isekai stories, the world that characters are transported to is more interesting than the one they left. I personally found the backstories of the two POV characters to be the weaker parts of the plot. It's not a deal breaker by any means, but I can see why some might be underwhelmed at these characters' backstories. But the main plot is far more engaging. The prologue nicely sets the scene for the story and leaves the reader with questions and mysteries that are answered as the story unfolds. After that and the Isekai origins, the reader is taken down a "reincarnated as a child" arc.

Character: The characters are fun. I think Kurt and Dorothy hit it off a bit too easy at the start, but their banter can be charming at times. The supporting cast isn't quite as engaging but they do have their moments, especially Kurt's "new" mother. There is also a bit of a twist that I won't spoil regarding that armored character that makes for a pleasant surprise.

Overall: A Hero For This Dragon both hits many of the tropes readers have come to expect from the genre while also carving out it's own niche. An interesting take on the genre as a whole. Not to mention there is plenty of cool art scattered throughout the chapters of important characters that are introduced.

Reviewed at: Daddy swings by

Ever seen Archer? No? Okay.

This here is something of a... newer piece of work. It feels as if whoever is writing this is new to the craft, not really sure what's meant to be written down. The style just feels all over the place, word choice being abnormal, sentence structure messing me up, and general pacing not working for me. I don't know what else to say. Will need editing for a higher rating. 4/5 from me.